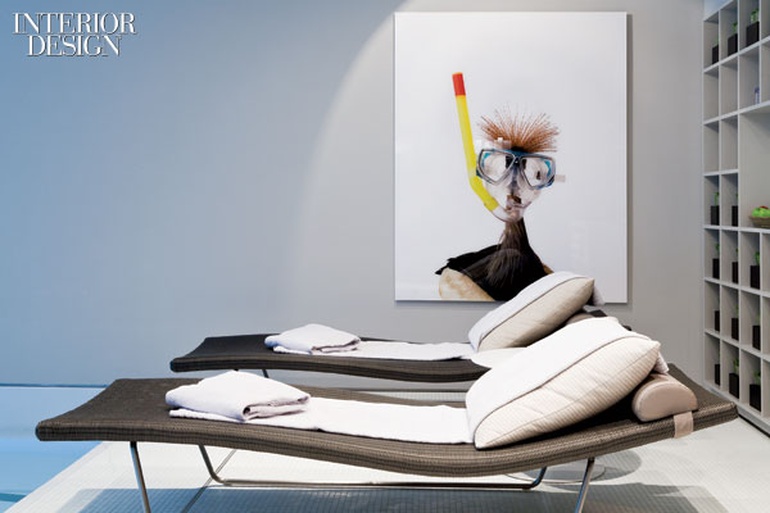 King Friedrich Wilhelm IV donated the first animals for the Zoologischer Garten Berlin. That was in 1844. In 1940, it got a neighbor, the Royal Danish Embassy, as a part of Adolf Hitler’s Germania capital-building project. An embassy until 1978, then sold to the public housing authority, the neo classical landmark by Johann Emil Schaudthas now become the luxury boutique hotel Das Stue, meaning the living room in Danish.

Axthelm Rolvien Architekten gut-renovated the former embassy, patched its damaged limestone facade, and pressure-washed it. “There were bullet holes from World War II,” Henner Rolvien notes. He and Annette Axthelm also constructed an addition bringing the total key-count to 80.

The cantilevered six-story addition is concrete and glass. “The idea was to make it as transparent as possible,” Axthelm says. “Guests can watch the animals in the zoo, like a safari.” A Mediterranean restaurant and a pool area on the ground level of the addition are among Das Stue’s public spaces by Interior Design Hall of Fame member Patricia Urquiola. Her firm, Studio Urquiola, also handled the bar, which connects the addition to the embassy building and, in the latter, the lobby, the reception area, the main lounge, and several small “library” lounges.

As if escaped from the zoo, animals are everywhere. In the travertine-clad lobby, Urquiola installed a 4-foot-long bronze crocodile underneath a constellation of pinpoint LEDs. In reception, a bird-and-tree pattern covers part of the ceiling. Colorful chicken-wire sculptures of a giraffe and gorillas hang out in the lounge. Footstools in the shape of rhinos and hippos graze in the libraries. “The animals contrast with the elegant austerity of the original building,” Urquiola says.

Furnishings by Urquiola, Arne Jacobsen, and others tends to the streamlined. “By minimizing the decoration, we made the view framed by the big windows the major focus of each room,” LVG Arquitectura principal Eugenia Linares says. The secondary focus could easily be the contemporary artworks, all from the private collection of one of the hotel’s owners. The subject? Animals, from orangutans to elephants.