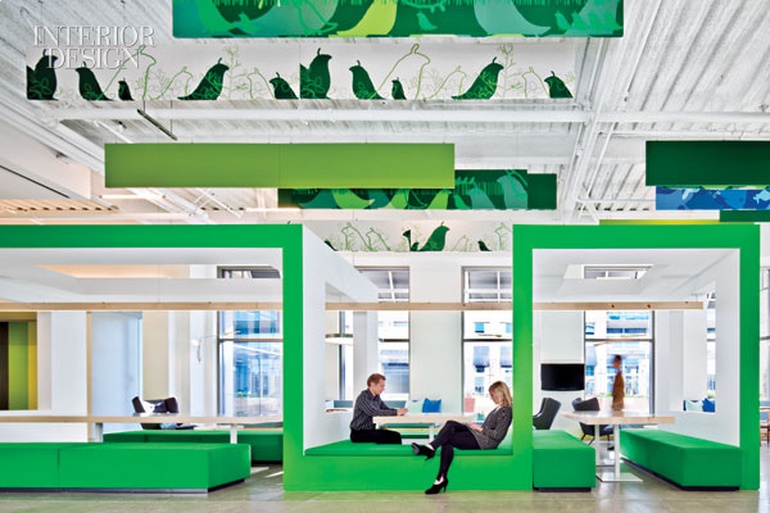 Standing in the airy lobby at Nokia in Silicon Valley, Kim Dale shields her eyes against the California sun. A Gensler senior associate who worked under principal Collin Burry on the project, Dale had collaborated with an outside motion-graphics studio on a colorful cascade of blocks projected on glass panels hung above the reception desk. The sun is washing the blocks out at this particular moment, spoiling Nokia's big entrance. Luckily, the problem lasts for only a short time each afternoon. Then the blocks reappear.

Dale likens the animated blocks to Apple's famous screen of App icons. (These blocks represent similar Nokia data, but the company won't disclose exactly what.) However, Apple comparisons don't mean that Nokia is trying to keep up with the Joneses—or the Jobses—in the local tech game. Nokia already commands almost a third of the global market in electronic devices, and the move to a 160,000-square-foot, five-story Sunnyvale building, left vacant by the recession, was a chance to consolidate four nearby offices and to explore "a totally new way of thinking," as Burry puts it. "What does the workplace of the future look like?" Here, it's buzzing with life.

The entry sequence combines reception and a lounge-style work area with tables and banquettes built into green-painted gazebo-type structures—the perfect place to eat lunch or meet a friend. Adjacent are two conference rooms and a seminar room fronted by accordion walls that fold back, creating an enormous space for company-wide meetings of up to 800 people. Overall, it's not precisely like a conference center or a café or a hotel lobby but a little like all three, because today, thanks in part to Nokia's mobile gadgetry, all the world's an office.

"People are flying in from all over, in the middle of the night, or you might have a conference call with Finland at 3:00 AM," Dale says. Gensler designed for the on-the-go, all-hours workday, providing such amenities as wellness suites with daybeds and showers and ad hoc brainstorming pods scattered with beanbags. Available when employees need to use a computer too big to fit in their pocket, even the workstations are multitaskers, boasting storage units that convert into chairs for impromptu powwows.

The espresso bar might host a party one day, a phone demo the next. With so many unprescribed spaces, the office is in constant motion, and employees are encouraged to mingle. Each level has the same basic elements—kitchen, "scrum room" for team meetings—but Gensler spread out the special features. If you want one of the Bay Area's insanely popular ice-cream sandwiches, an It's-It, you have to go to two. To shoot pool, go up to five. There's only one table, though, so you have to mingle if you want a game, yet another Gensler way to build an energetic office.

It's that energy that jurors for the IIDA's annual Interior Design Competition cited in naming the project a winner. "It's so joyful. I could work anywhere there," Interior Design Hall of Fame member Carl D'Aquino says. Still, Burry notes, "Nokia isn't as youthful as, say, Google and Facebook. So we wondered, How does a company stay relevant in a way that's more grown-up?" For one thing, nobody zips around on scooters. And Dale has noticed that, as open as the?interior is, it's remarkably quiet. "In a cubicle, you think you're alone, so you talk louder," she says—while standing in a calm corner, interrupted only by the blips and beeps of the Galaga arcade machine behind her. (Even adults play video games.)

You might call it Scandinavian cool with a healthy dose of California sun. Nokia's Finnish heritage comes through in the pale wood accents and the Marimekko-esque banners, but the wood is fragrant knotty pine, and the banners interpret each vibrantly color-coded level as a specific California biome. Crimson is—can you guess? A redwood forest. Yellow is a sandy beach. In the lobby, the banners depict quail, a native bird. These quail, however, are bright green.

The land that Nokia's building sits on has been an office park for a decade. However, Burry says, "This is fertile ground. It used to be fields and fruit orchards. Now it grows technology." He also notes that there's still an old peach processing plant in sight and, a little sheepishly, reveals the in-house slogan Gensler used to ground the Nokia project in its terroir: Peaches to PDAs.