On Mountain Time: A Swiss Company Lays Down Roots In Colorado 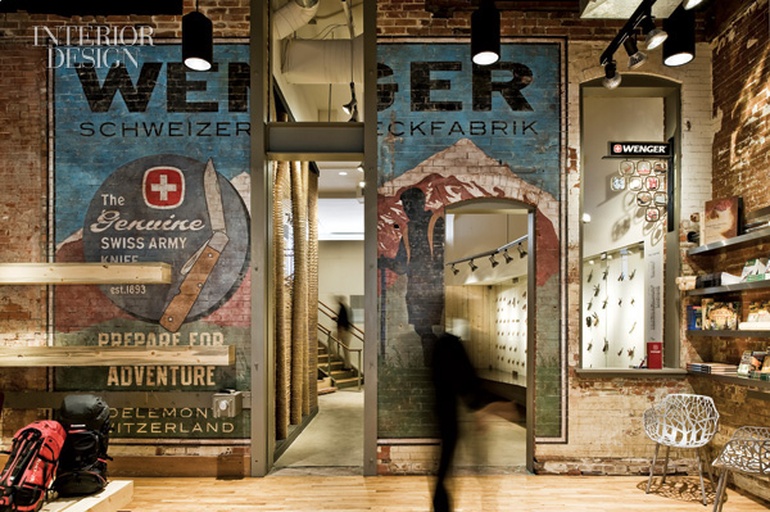 A Colorado town of just over 100,000 residents might seem an odd place for a 118-year-old Swiss company to set down roots. But Boulder, home to a slew of Olympians and extreme-sports professionals, turned out to be the perfect spot to open a U.S. flagship for Wenger, one of the two makers of the Swiss Army Knife. After a Wenger licensee signed a lease for 2,600 square feet in a century-old masonry building, the real-estate broker recommended Gensler as the right firm to bring Alpine accessories to the Rocky Mountains.

Since the U.S. launch would also serve as the debut for a line of athletic footwear, the licensee envisioned a simple shoe store. "We took them down a somewhat different road," Gensler design director Blake Mourer says. Because Wenger knives are so well-known, as are its watches, Mourer postulated that they would be the best draw to help introduce newer offerings: "We thought that the company should trade on its legacy." Or, as he puts it, "Admire, desire, acquire."

Mourer's aesthetic mission: Make the store appear as if it had always been there, albeit with contemporary flourishes. The building offered some history of its own in the form of a sidewall in stacked local limestone, standing ready for the quick installation of basic shelving for shoes. An existing brick wall, two thirds of the way back, divides the sales floor into front and rear rooms. Painted on the brick, what appears to be a vintage Swiss Army Knife advertisement is actually the work of Gensler. The fact that a doorway and a window cut through the faux ad's mountain image—in seemingly arbitrary places—only enhances the illusion that the wall was altered decades after the mural was painted. "We crafted the interior like a movie set," Mourer explains.

Displays hug the shop's perimeter. Watches are strapped onto colorless clear acrylic rods mounted in horizontal rows inside a vitrine out front. Beyond the mural wall, in the rear room, a vitrine contains a veritable museum of Genuine Swiss Army Knife history, with assorted models Velcro'd to white back-painted glass. Set off like a prized jewel, in its own vitrine cut out of an adjacent column, is the Giant, a 2008 model listed by Guinness World Records as the most multifunctional Swiss Army Knife ever produced, incorporating 87 tools.

Most of the vitrine column is encased in beetle-kill pine, lodgepole pine that has fallen victim to the ravages of a pest thriving in the Rockies' increasingly dry climate. The beetles suck the life-giving sap from the trees without damaging the surrounding wood, so the trick is to harvest them before they rot on the stump. The resulting lumber, visibly different from other knotty lodgepole pine, bears ghostly blue-gray veins that "make a statement about the local environment," Mourer says. He used beetle-kill pine throughout the store, for the shoe display shelves, the cash-wrap desk, and even, on the wall behind, a topographic map of Boulder. As Wenger stores roll out around the U.S., the map idea can be realized in different materials. "That way, the brand connects with the locality," Mourer notes.

The flagship connects with Boulder residents and tourists by inviting them to seminars in the rear room, where a?projection screen shares adventure experiences. Opposite the knife vitrines, an artist who once apprenticed with sculptor Andy Goldsworthy built a partition from hemp twine strung between beetle-kill logs. Visitors have begun threading notes through the twine, creating a kind of prayer wall. Perhaps someone, someday, will write: Please send the beetles away.