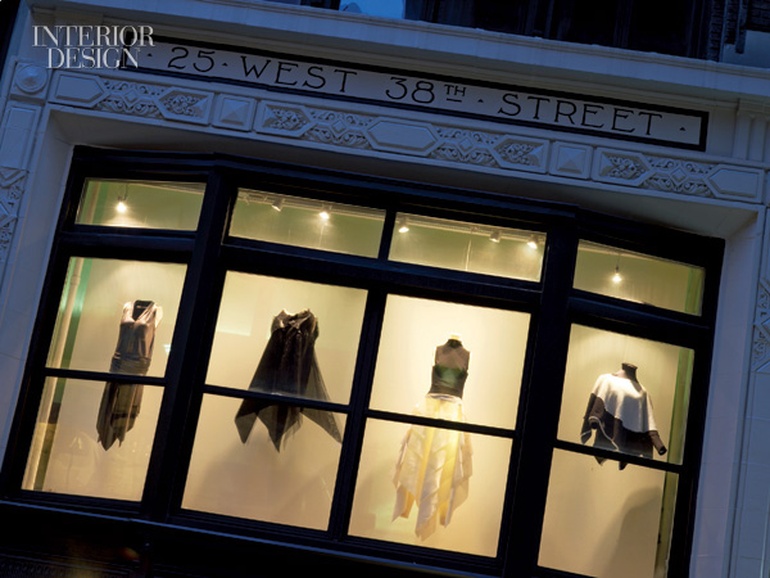 A stark contrast to the sleepy ribbon-supply house next door, Yeohlee's first boutique is innovative, witty, and super-mod, and its location, on the fringes of New York's gritty garment district, is defiantly deliberate. Both fashion designer Yeohlee Teng her life partner, architect Joerg Schwartz, are spearheading Made in Midtown, a Design Trust for Public Space program to revitalize the area. And it's working. People have literally screeched to a halt and leaped out of cars to investigate the striking Yeohlee storefront.

After years of selling through the likes of Bergdorf Goodman and Takashimaya, Teng simply had to conjure architectonic surprises at her own shop—because the adjective that every single fashion writer is obliged, practically contractually, to apply to her clothing is architectural. Her references derive not from pop culture but, for example, from the modernist buildings of Robert Mallet-Stevens or the suprematist paintings of Kazimir Malevich. An?unbelievable amount of serious yet playful thought lies behind every one of her garments.

As for her 1,400-square-foot shop and showroom by Joerg Schwartz Architect: ditto. "I've designed spaces for Yeohlee several times, so I know what works," Schwartz says. This is?an understatement. The convergence of the pair's aesthetic is virtually total. Zero Waste is an equally major theme in Yeohlee fashion and the Yeohlee interior. Imaginatively repurposing industrial materials and appropriating existing elements, Schwartz has given the Yeohlee shopper a Zero Waste environment.

Most striking, upon entry, is a framework of metal strips running across the ceiling, then down a sidewall, at 1-foot intervals. These strips turn out to be nothing more than standard studs—well, they were standard before being brought into a whole different dimension. "I was looking to use galvanized steel like in garment warehouses, only not in the same way," Teng says. Schwartz continues, "We had to have just the right finish and the right shade of silver."

After much searching, he eventually located the perfect studs. The manufacturer custom-cut them to 14 feet 6 inches long, carefully keeping the steel free of marks or dirt, and threw in 100 extra angle clips to beef up support. "The frame had to be put together as if it were a piece of furniture," Schwartz says. So he told the carpenters to "think of musical notes on a staff." Teng likes the metaphor: "When I look at it, I hear a harmony."

The rest of the details were designed to?disappear. "It's raw, without fuss," he notes. He eliminated baseboards, sourced basic track lighting, and hung clothes from construction pipe. Suspended from aircraft cable, the fitting rooms' black curtains turn out to be Tyvek hand-pleated by venerable garment-stitching specialists. "I'm hoping it gets creased and soft," he says. Slightly farther back, corrugated fiberglass, hung on barn-door track, partitions off a pair of offices.

"I insisted on keeping the floor," Yeohlee says, pointing to shabby 1970's ceramic tile that now appears oddly chic. "I believe in industrial­ character 100 percent." The dove-gray squares flow from the shop in front, back through the narrow corridor past the fitting rooms and offices. Then, suddenly and rather magically, the skylit rear showroom opens up with its black-and-white checkerboard floor, again existing.

Playing off the checkerboard, square steel plates shield incandescent bulbs, turning them into whimsical sconces-the contractor's invention. He also improvised a precision device, actually a hair dryer's resistance coil, to cut expanded polystyrene into the uniform blocks that hang overhead, serving acoustical and decorative purposes. "The AC is up there," Schwartz says, "so they're going to dance in summertime." Each season's collection is either displayed or concealed by rolling cabinets with one open side.

Salespeople and buyers enter the showroom via a plywood-paneled side entrance that is unreconstructed industrial. It's public space for the building, not specifically Teng's, but she grins when pointing out the bank of mailboxes, their scrawled numbers blatantly wrong. She and Schwartz get a huge kick from randomness. Every morning, the store's sound system plays archived programming from a listener-supported New Jersey radio station with a DJ who reads out neighborhood crime blotters. The couple also like the corner bar's two TVs, one airing fashion shows and another showing Australian football.