Getting the Signal: 37signals Chicago Office

Employees at 37signals, a Chicago software-development company, have the option to work at home full-time, and most elected to do so—until the company moved. "Most people come into the office every day now," president Jason Fried says. He attributes that revolution to the meticulously planned, highly refined design by Brininstool, Kerwin & Lynch. 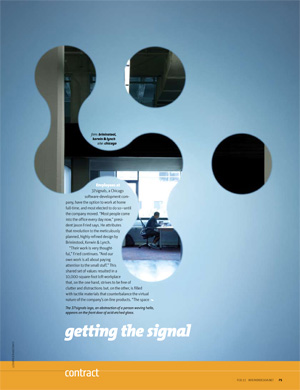 "Their work is very thoughtful," Fried continues. "And our own work is all about paying attention to the small stuff." This shared set of values resulted in a 10,000-square-foot loft workplace that, on the one hand, strives to be free of clutter and distractions but, on the other, is filled with tactile materials that counterbalance the virtual nature of the company's on-line products. "The space is all about focus, so they can do their best work," Brad Lynch says.

Most of that work takes place in an office area with oak-topped workstations and red-and-gray striated carpet tile. The other two zones are reception, which includes the walnut-floored lunchroom-lounge, and a freestanding volume containing five meeting rooms. On the outside, this volume is partially clad in sound-absorbing gray wool felt stacked in strips, like the ends of a blackboard eraser, and some of the walls inside are surfaced in actual blackboard. Considerably more grown-up is the furniture, a mix of such mid-century classics as chairs by Charles and Ray Eames and Harry Bertoia, sofas by Florence Knoll, and benches by Chicago's own Ludwig Mies van der Rohe.