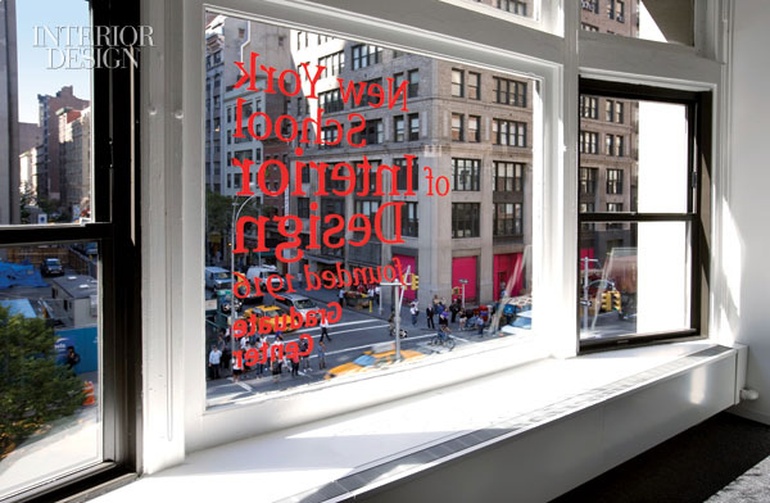 With alumni including Interior Design Hall of Fame members Mica Ertegun, Mariette Himes Gomez, and Rose Tarlow, the New York School of Interior Design has come a long way since its founding in 1916. But with only 1,400 square feet for MFA students at the main location—a connected pair of Renaissance and Colonial revival buildings—president Christopher Cyphers knew he'd need to lease much more square footage to accommodate additional graduate programs, which he recognized had the greatest potential for growth. Budget constraints ruled out finding something nearby, on the Upper East Side. So Cyphers looked at spaces throughout the city before finding a 20,000-square-foot light-filled loft a quick subway ride away. After interviewing a dozen design firms, he and his board committee chose Gensler.

Principal Mark Morton placed the new design studios along window walls, as daylighting would be a key component in the pursuit of LEED-CI Platinum certification. Ditto for a computerized light-harvesting system, LED track lighting and ceiling panels, sustainable rubber flooring, recyclable nylon carpet tiles, and low-VOC paint and adhesive. On the tech side, features include WiFi for all those student laptops, a 3-D printer, and a laser-cutter. "We don't even have a laser-cutter at our office," Morton laments. He also confesses to "lots of pressure, designing a school for designers."

Time pressure was intense, too. Morton had only six months, between the signing of the lease and the opening of the school year, to get the graduate center up and running. And there's no spring break in sight. He's now busy renovating another 20,000-square-foot space, one story below.