All the World's a Stage: Michael Haverland Revives A Triplex In Gramercy Square 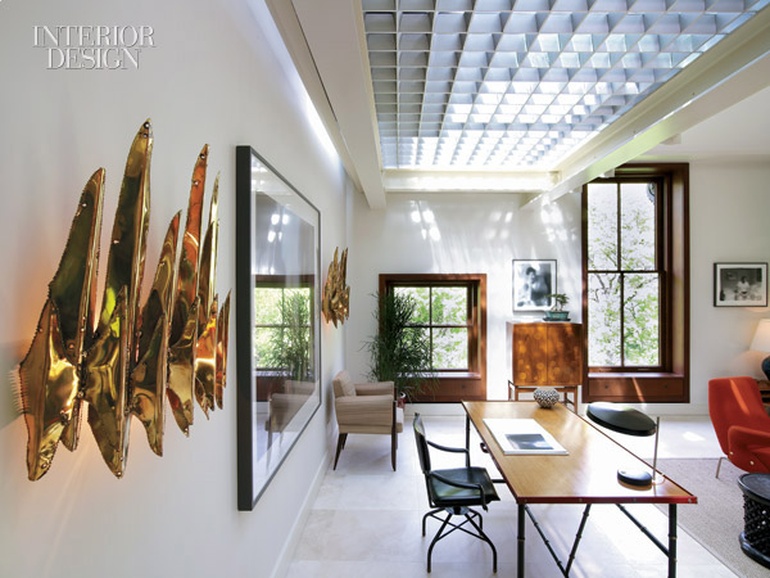 In all of New York, there's no place like Gramercy Park, an impeccably tended gated square to which only lucky residents of the surrounding town houses and apartments have a key. Behind those gracious facades, you'd expect to find dimly lit parlors draped in damask. But in the case of one six-story Greek revival house, nothing could be further from the truth. Imag­ine entering the 1865 building and taking the elevator to the apartment on the top three floors, where you encounter a decidedly untraditional, unconventional space. Sunshine from an enormous skylight bathes a dramatic travertine staircase. Pedigreed mid-century furniture and large-format contemporary photography fill the rooms on either side. That's the scenario envisioned by the house's owner, Classic Media cofounder and co-CEO Eric Ellenbogen, who has bought, fixed up, and sold multiple Manhattan residences as well as owning a William F. Cody house in Palm Springs, California.

Renovating the Gramercy property involved a multiphase, multiyear collaboration with Michael Haverland Architect. The house was a complete eyesore at the outset—stripped of its original stoop, encrusted with peeling lime-green paint, and chopped up into eight apartments in which nary a mantel, molding, or ceiling medallion remained. While tenants were relocated, Michael Haverland began restoring the redbrick facade to the exacting standards of the Landmarks Preservation Commission. He stripped and re-painted the brick, reinstated the stoop, and reproduced the original ironwork and cornice. As for the interior, it was devoid of details and dark like most town houses, having windows only on the front and rear. Gutting the space and starting from scratch was the only solution. "I'm all for economy and salvaging," Haverland says. "In this case, though, there was nothing to save."

To brighten the the 3,600-square-foot upper triplex, he inserted a center skylight extending all the way from one side of the roof to the other. The staircase directly underneath serves as a light well and the spine of the apartment. Its entrance is on the lowest level, which contains the kitchen, dining room, and master suite. The living room and library share the next level up. On the top level are two more bedrooms, plus a mezzanine study that overlooks the living room. At the rear, floor-to-ceiling windows and doors open to terraces large and small, resulting in an indoor-outdoor flow that breaks the staid Gramercy mold.

New architectural elements do, however, make reference to the history of the house. Those rear windows and doors have mahogany frames that echo the divided-light front windows approved by the Landmarks Preservation Commission. Another traditional detail, translated in a modern way, is the Louis Sullivan pattern that inspired the lacy laser-cut MDF panels used for doors to the coat closet and wet bar and for a freestanding screen that lends some privacy to the library.

Alan Tank­sley, a Gramercy-area resident whose namesake interiors firm was called in to help "stage" the upper triplex in a sluggish market, consulted on finishes and light fixtures to "soften the architecture's hard edges," he notes. Most of the rooms he painted in light neutrals, and softly colored grass cloth covers walls in two of the bedrooms and the home office. Tanksley's other reason for keeping the background restrained was the distinctive mid-century furniture that Ellenbogen has been collecting for 25 years: rare, iconic examples of the genre, some of them stored in a climate-controlled warehouse. Although Tanksley found some of the furnishings at auction in Los Angeles, Chicago, and New Jersey and added such inexpensive purchases as the Isamu Noguchi paper orb hanging from the raked ceiling of the living room, the project was largely, Tanksley explains, "a matter of working with what Eric already had." Designer, client, and a stylist, Rogelio Garcia, arranged the furniture, playing straight lines against curves and juxtaposing pieces with a machined quality against those that look handmade. To complete the "lived-in" illusion, the Julie Saul Gallery installed a selection of contemporary photography in advance of a cocktail party thrown by Ellenbogen's real-estate agent to entice potential purchasers. Someone came forward soon after, a man who found the turnkey arrangement appealing enough to buy the place, lock, stock, and barrel.