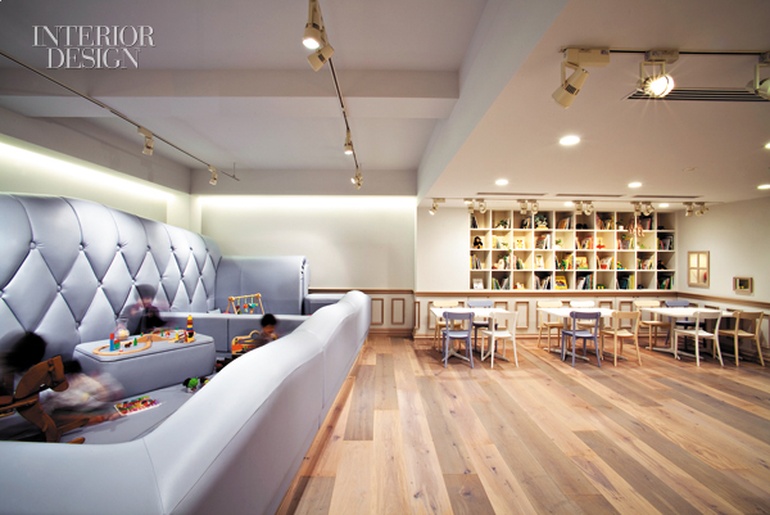 A windowless gray concrete basement usually connotes one thing: dungeon. So the fact that Nendo took on the task of converting such a space into a private playroom for children-especially those belonging to the well-heeled residents of Tokyo's Omotesando Hills-speaks volumes both about principal Oki Sato's imagination and about the realities of living in the Japanese capital. It's a place where apartments are cramped, and kid-friendly establishments are scarce.

"We don't have enough places to keep kids for a few hours. It's a big issue in Japan," Sato says. At 2,200 square feet, the Omotesando location, formerly a restaurant, presented a rare opportunity.

Transforming a dreary basement into the Tokyo Baby Cafe entailed a series of visual illusions. (As those are something of a specialty for Sato, Nendo was particularly well suited to the job despite having never designed for children before.) Entering the playroom is like passing through a rabbit hole into an alternate reality, thanks to the "sofa" positioned straight ahead: It's 7 ½ feet tall and nearly 21 feet wide.

Upholstered in periwinkle blue vinyl, this outsize Chesterfield has a button-tufted back and a sunken seat that's actually a playpen. Cameras installed above and video screens on walls allow parents to keep an eye on a tot even while sipping coffee at the rows of tables nearby. Sato used the same upholstery and similar shapes for the nursing chairs and diaper-changing tables tucked into an en­closure at the rear, alongside the restrooms and kitchen.

Shifts in scale not only offset an unfavorably low ceiling but also emphasize that the two customer groups served are equally important. "We designed everything around the relationship between parent and child," Sato explains. Lightbulbs come in two sizes, big for the entry and small elsewhere, and functional doors are interspersed with impostors no larger than a 4-year-old. While parents sit at the tables, kids crawling underneath discover stickers depicting both baby and grown-up animals. Even the oak floorboards have been cut to longer and shorter lengths.

Sato had the boards subtly cerused before installation to tie in with the pared-down color palette of white, beige, and that Parisian periwinkle-specifically requested by the owner to "look like a French café," Sato reports. The combination manipulates the senses again, making Tokyo Baby appear loftier and more luminous. And since 160 square feet of floor space in the playroom had to remain open to give maximum maneuverability to stroll­ers, visual impact elsewhere was key.

Lighting helps, too. In the playroom, recessed halogen spotlights mingle with incandescent track lighting, while hidden fluorescent fixtures wash walls in bright white. In the entry hangs a warmer constellation of those large incandescent lightbulbs.

There's no sunlight, of course, but faux windows in varying sizes are scattered across two walls. Mirror fills some of the frames. Others surround internally lit cubbies, which add depth while doubling as a place to stash toys and other curiosities.

On the opposite side of the room is a whole wall of cubbies. When you've got more than 600 books and toys to choose from, how do you tell the kids it's time to go home?