The Surrey With the Fringe on Top: Lauren Rottet Revives An Upper East Side Classic 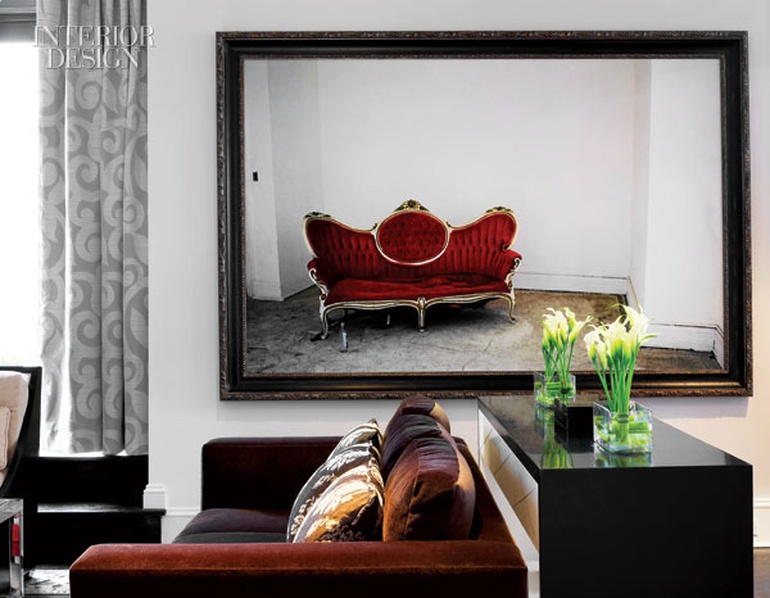 Lauren Rottet is stealing flowers. OK, to be fair, the Interior Design Hall of Fame member is borrowing fresh white roses and moving them to the presidential suite of New York's Surrey hotel. In towering Christian Louboutin heels, no less.

Rottet Studio just spent 14 months gut-renovating the Surrey to the tune of $60 million. The 1925 beaux arts building occupies prime real estate on a leafy side street off the chicest stretch of Madison Avenue. Before the renovation, however, this fading beauty owned by the Denihan Hospitality Group was best known as the home of Café Boulud, chef Daniel Boulud's clubhouse for guys who look like paler versions of George Hamilton and women who still dress like Babe Paley. The hotel itself had remained relatively untouched since the mid-1990's—a place that local families often stayed while their own apartment renovations were in progress, thanks to the kitchenettes in almost every room.

It was hard to compete with nearby heavyweights such as the Mark, which just underwent a two-year, $140 million renovation by Jacques Grange, and the Carlyle, site of a much-publicized 2007 overhaul by Scott Salvator. "You can't out-luxury or out-tradition them," Denihan COO Brad Wilson says. He and Rottet, who previously worked together on the Affinia Shelburne hotel farther downtown, also suspected they would alienate the neighborhood demographic by creating an achingly hip boutique hotel that didn't emphasize comfort. So, staking out a middle ground, they went about creating a classic, firmly rooted in tradition, yet with contemporary touches that more august competitors lacked.

Those touches include a strikingly progressive art collection featuring the likes of Jenny Holzer and Richard Serra. Rottet acquired the pieces at fairs, galleries, and auctions with the help of connections established over the decades she's spent buying art for corporate interiors—first at Skidmore, Owings & Merrill and then at DMJM Rottet before she went out completely on her own as Rottet Studio. (The Surrey is the first project completed by her Houston-based firm's New York satellite office.)

Her work at the Surrey began outside, where she replaced the typical green canvas awnings with black ones, plus a canopy in black-painted metal-framed glass. That change required lobbying the local landmarks commission. "Everyone told me I wouldn't be able to convince them," Rottet says. "But I did." Right inside, her reinvention of the lobby involved reconfiguring it to make room for the Boulud-run Bar Pleiades. She also stripped out the cracked pinkish marble walls and the worn terrazzo flooring. The terrazzo has now been replaced by a marble-tile mosaic that mimics the pattern of an oriental rug as sketched by Rottet.

A fine-arts major before switching over to architecture, she relied heavily on her drawing background throughout the hotel—her whimsical handiwork is everywhere. A window-seat cushion in the presidential suite boasts some of her own handwritten poetry, while a chaise longue nearby features text on the origins of the Manhattan cocktail in addition to a recipe. For the front of the reception desk, she created star patterns that a leatherworker in Montana transformed into panels. "I told him not to go cowboy on me," she says with a laugh. The word infatuation is scrawled, graffitilike, across the silver-leafed front of a highboy in the lobby. In the adjacent Bar Pleiades, she had scribbled numerals painted on the back of the stools and a poem called "Central Park, 1974" woven into the carpet in block letters.

Bar Pleiades takes its name from Les Pleiades, a legendary restaurant that preceded Café Boulud at the Surrey. The French word refers to a cluster of luminaries, and the boozily elegant bar has already become just that, a favorite after-work hangout for Tom Ford and Vera Wang, who have Madison Avenue flagships. In another fashion-minded move, Rottet channeled Coco Chanel's makeup compacts via the bar's black lacquered surfaces crisscrossed by white lacquered lines. Carved out of one of these planes is a niche large enough to seat eight on a U-shape banquette. Above its white upholstered back, tobacco-brown walls are quilted like a Chanel handbag. The cigarette theme continues with a series of Donald Sultan photos of smoke rings.

Rottet carried the bar and lobby's understated black, white, gray, brown, and beige palette upstairs to the 190 guest rooms, which start at 350 square feet and top out with 4,500-square-foot suites overlooking Central Park. Mosaic flooring likewise reappears, this time Rottet's take on an old hotel logo. As for furnishings, she says, "We were kind of design schizophrenics, moving through all the styles from 1925 to 1940. It's beaux arts revival, art nouveau and art deco, traditional and contemporary, all together." Oh, and the flowers look great, too.