Everybody, Gather 'Round: A Kitchen Renovation In Brooklyn By Khanna Shultz

This elegant Edwardian town house on a tree-lined block in Brooklyn, New York, is much like its neighbors—starting with the limestone facade and continuing through rooms replete with dark oak and cherry woodwork and ornate plaster moldings. But the mood changed quickly in the kitchen tacked onto the back of the parlor floor. "It was 100 percent 1980's design fetishes. Sheetrock, pickled wood, and a vaulted neoclassical ceiling," architect Robert Schultz recalls. And the only evidence of the outside world was a trickle of light from three tiny windows crammed between cabinets. 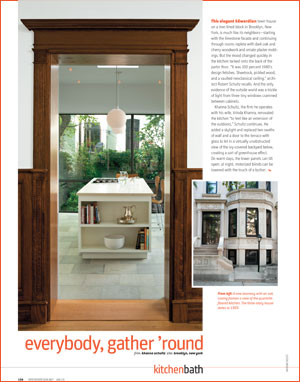 Khanna Schultz , the firm he operates with his wife, Vrinda Khanna, renovated the kitchen "to feel like an extension of the outdoors," Schultz continues. He added a skylight and replaced two swaths of wall and a door to the terrace with glass to let in a virtually unobstructed view of the ivy-covered backyard below, creating a sort of greenhouse effect. On warm days, the lower panels can tilt open; at night, motorized blinds can be lowered with the touch of a button.

He furthered the connection by installing the same gray quartzite slabs outdoors and in. Radiant heating makes the kitchen floor a comfortable playground for the young daughters of the owners, banker Michael Genereux and his wife, Virginia. Despite the room's small proportions, 14 by 18 feet, it's clearly a place for the family to spend time.

Contributing to the brightness, white glass-fronted cabinetry looks expensive, though it's little more than MDF brush-painted high-gloss white. "Chipped lacquer is hard to repair. Living with kids, you need surfaces that can be easily touched up," Schultz explains.

A colossal island, topped by a single slab of off-white quartz composite, is the kitchen's dominant feature. "It's a little unorthodox for a room this size," Schultz admits. "But it functions as a big table." Arne Jacobsen stools pull up on two sides, thanks to a clever L-shape recess. The remaining two sides of this highly functional element house an oven, drawers for pots and pans, and shelves for books. At the far end of the counter, beside the gas cooktop, a slim remote-controlled down-draft rises from a slot to double as a safety barrier between cook and seated child.

Viewed from the backyard, this scene is framed by the exterior's russet-brown brick, repurposed from the old kitchen's walls. The color offers a warm contrast to the windows' Bauhaus-like black-painted steel frames and, inside, the ethereal glow of two Louis Poulsen pendant globes. Beyond, the dining room can be glimpsed through a center doorway, formerly in the corner. With the old location, Virginia Genereux says, "The kitchen was cut off from the rest of the house." Moving the door made the spaces finally feel integrated. "We had family here for the holidays," she adds. "When I was in the kitchen, I could see and talk with them."

Flanking the doorway are a pair of tall charcoal-gray corkboards. "One thing I know from having kids myself," Schultz says, "is that it's nice to have a place for artwork, to-do lists, the babysitter's number." And a poster of Disney heartthrobs Dylan and Cole Sprouse.