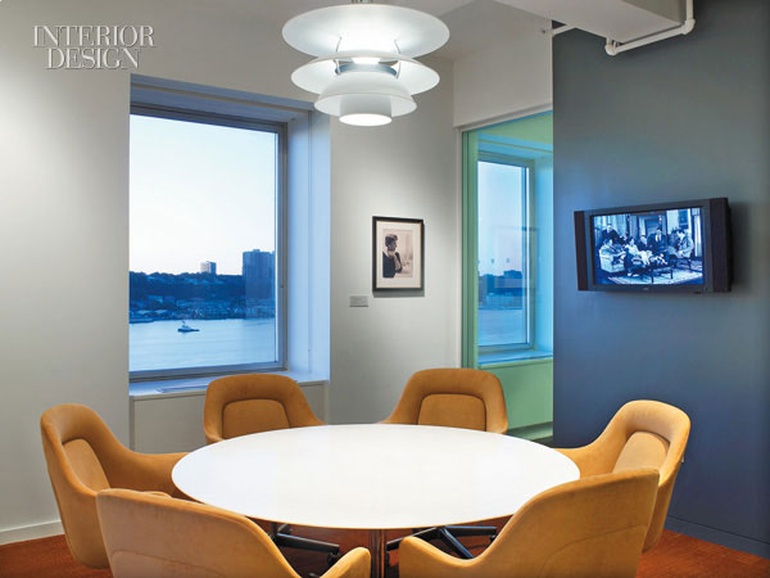 Sustainability is a signature of initiatives supported by the Rockefeller Brothers Fund. However, it took FXFOWLE to inspire president Stephen B. Heintz to try for LEED Platinum at a 23,000-square-foot New York headquarters shared with the Rockefeller Family Fund and V. Kann Rasmussen Foundation. Planning for the long term, Rockefeller Brothers agreed to upgrade the efficiency of planned mechanical and electrical systems, which should pay for themselves in five years. Beneath wood veneers, MDF substrates are Forest Stewardship Council–certified; flooring in the lobby is natural Vermont slate; and counters in pantries are are cycled-glass composite. “A little here and a little there, and we were able to push it up a level without spending significant dollars,” managing partner Guy Geier explains.

Whether technically LEED-certified or not, Geier says, “Pretty much 100 percent of our workplace projects are sustainable.” For this one, the firm emphasized reuse by pulling furnishings out of the Rockefellers’ own storage—even a sofa by Florence Knoll and Brno chairs by Ludwig Mies van der Rohe. “This is the real stuff, guys,” Geier told his clients. (New reissues with a similar feel are by the likes of Jens Risom.) Stately nonfunctioning doors at the entry were unearthed at the Rockefeller estate Kykuit in Pocantico Hills, New York, and given a distressed red decorative finish.

Maximizing natural light, Geier’s scheme pulls away from the perimeter. West-facing ninth-floor windows frame a spectacular view across the Hudson River to the abundant foliage of the Palisades, enlarged and preserved in perpetuity after John D. Rockefeller, Sr., pledged $500,000 in 1909.