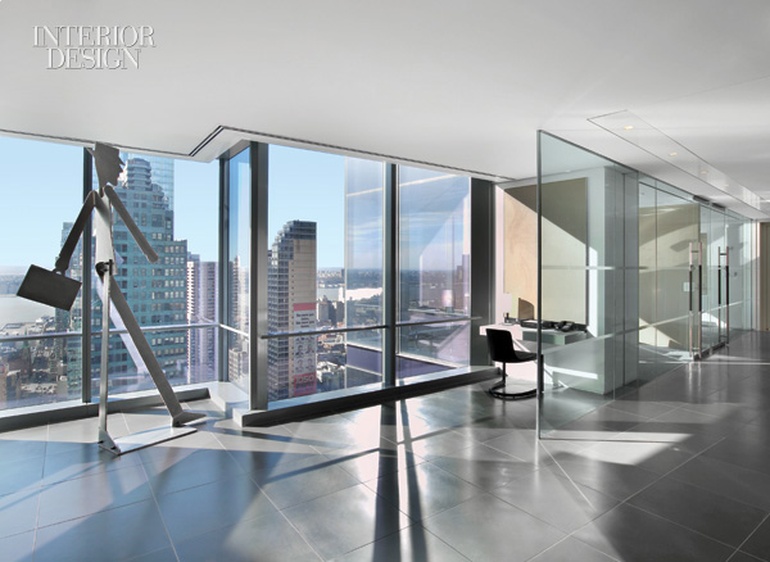 Not so long ago, Proskauer Rose Goetz & Mendelsohn was an old-fashioned law practice, albeit a successful one. Then, surprisingly quickly, it emerged as one of the largest and fastest-growing shops in the profession—legally renamed Proskauer Rose and rebranded simply as the fearsome "Proskauer." The current client list includes individuals with astonishingly deep pockets and organizations with mind-bogglingly high profiles. (It's no secret that the NBA and NFL call for advice.) A similar transition had not occurred, however, in the dated aesthetic of the New York office. For the past two decades, the lawyers had worked amid heavy wood trim and thick carpet. With the lease nearing its end, Proskauer's then chairman, Allen Fagin, championed a move to 14 floors of a virgin LEED Gold high-rise and hired fellow behemoth Gensler to design the space.

To develop a vision for the new premises, Gensler design principal Mark Morton took a Proskauer delegation on office tours throughout the city. The open plan and generous amenities of the Bloomberg headquarters earned raves—the lawyers determined that their own office should function like a law firm but "would be a total failure if it looked like one," studio principal Julia Simet says.

Proskauer's interiors are dressed up, Simet explains, to rival a luxury hotel. However, Morton adds, "They have to stand the test of time, because they will not be refreshed and redone as often as a hotel." He also credits the lawyers with being "pretty good about leaving their taste at home," while Fagin admits he was happy not to relive earlier debates about "what color the wood paneling should be stained." Which is not to say Gensler won every round. There is indeed paneling—in subtly cerused oak—and hot colors were deemed too wild.

Paintings, works on paper, and photography, recently acquired for the collection, "infuse some soul," Proskauer COO Arthur Gurwitz says. When you walk through the front doors, a wall-size Frank Stella canvas hangs to your left. The nearby silk screen on mirror is by Robert Rauschenberg.

Private offices have frosted-glass fronts, since much of the lawyers' lawyering is confidential. Gensler positioned linear fluorescent fixtures just behind the frosted glass, rather than in the corridor, to serve as emergency lights and give the appearance that the offices are always occupied. Double layers of the same glass bring extra heft and soundproofing to office doors. Meanwhile, administrative assistants sit in the open, at workstations set beneath glowing white stretched fabric ceilings.

At 400,000 square feet, the space is about 5 percent smaller than before. It feels bigger, though, thanks partly to technology. For example, information now available online allowed for the elimination of 10,000 square feet of libraries. That freed up space for common areas.

In reception and an adjacent lounge, special-occasion colored cove lighting turns on when the lawyers host events for up to 400 guests. The largest conference room, capacity 200, divides into four rooms when sky-fold doors descend from the ceiling. In the big, glamorous cafeteria, meals are served according to what Morton calls a market concept, featuring rustic wood-block counters, tufted wool carpet in beige and chocolate brown, and travertine mosaic floor tile. Million-dollar earners who formerly left the building at lunch now sit in banquettes upholstered in leather and cut velvet, under a ceiling of mirror-backed bronzed glass subtly acid-etched with a filigree pattern. Off-white linen-wrapped drum shades soften LED sources.

In the coffee bar, chandeliers with seeded-glass globes, fitted with Edison bulbs, descend from a ceiling painted a deep iridescent bronze. Cappuccinos and lattes aren't the only beverages on offer, though. An impressive wine collection awaits in stainless-steel coolers with locked glass doors. Gurwitz fishes a coveted key from his pocket for inspection.

"You feel good working here," Gurwitz says. Fagin, for his part, acknowledges the role of Gensler's design in recruiting and morale, and he brags about being "twice as comfortable" in his new office. Lots of his colleagues are, too. Because of the building's L shape, more than half the partners got to claim corner offices.