A Ribbon Runs Through It: Clive Wilkinson Ties London's Macquarie Group Together 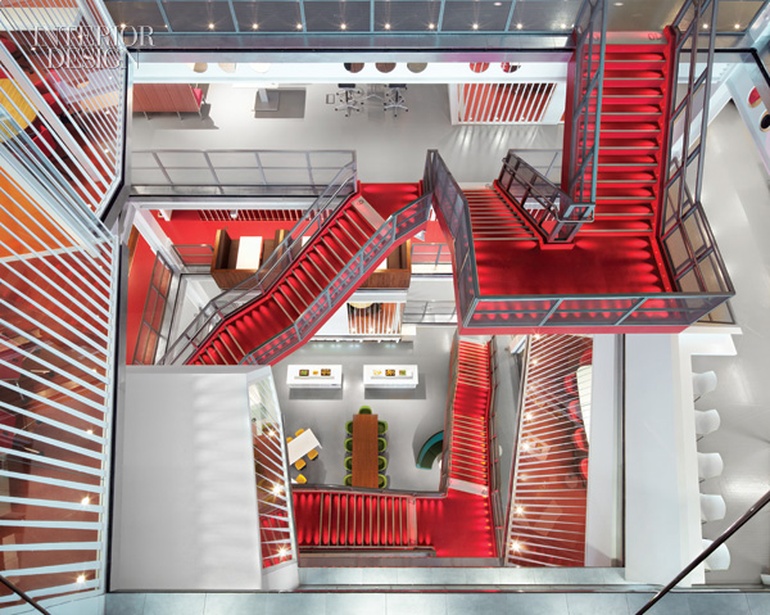 The saga continues. Two years ago, Clive Wilkinson Architects triumphed with its first project in the financial-services sector—the Macquarie Group headquarters in Australia centers on a jawdropping 10-story atrium into which jut meeting pods shaped like shipping containers in Sydney Harbour. This time around, the site is the City of London, where Macquarie staked out 216,000 square feet in a spanking-new LEED Platinum building by Arup. Decidedly, there's a touch of déjà vu. Once past the reception area at street level, the six office levels are organized around an atrium comparable to its Sydney predecessor.

Brits abandoned their hide-bound conservative image decades ago. Nevertheless, this project is more restrained than the bank's Aussie headquarters. "Macquarie was keen to convey the message that it's grown-up, mature, established," globetrotting Interior Design Hall of Fame member Clive Wilkinson says. Meeting rooms hover overhead in London, too, but they're fewer and quieter. The showstopper, affectionately nicknamed the "ribbon of connectivity," is the crimson staircase that zigzags through the void. "It folds around, based on where we needed to enter each level," he explains. "That's how it translates into sculptural." Macquarie's head of workplace design, Anthony Henry, chimes in, "Clive walked a fine line between the solid and serious and the dynamic and innovative."

Without a themed lounge or a jazzy pod on-site, Wilkinson still found ways to amuse himself. "It was great fun to bash through the dark center of those large floor plates," he says, then experiment with "creative lighting" to simulate sun shining into the new atrium. An example: LEDs illuminating stair treads. "It's important to note, as a contrast, that the Sydney building was designed from the start with a skylit atrium," he points out.

In a major eco effort, he reused steel beams from interior demolition to build catwalks bridging the London atrium on the top two levels. But what about wasted space overall? Hardly. Even subtracting the cutout from the equation, Macquarie can easily fit a couple thousand employees.

The project's catalyst was a consolidation of groups, six previously split between two locations. "With the commercial leasing market at the bottom of the cycle, this move gave us the opportunity to bring our people together while reducing real-estate costs," Henry says. Wilkinson adds, picking up the narrative, "It was like having six different clients." And each had particular needs and varying "Chinese wall" requirements for regulatory compliance. That explains why Sydney's activity-based workplace, with its radical flexibility, wouldn't do. Furthermore, almost half the London staffers are traders. Wilkinson gave them two trading floors, on the largest floor plates in the stack, and installed an active chilled-beam HVAC system to keep everyone comfortable.

Minimal walls and a pervasive Wi-Fi network promote laptop use, and much of the planning centered on shared spaces. Wilkinson provided a slew of them, accessible to the entire staff. Arrayed around the atrium, meeting rooms have clear glass fronts suggesting a greater political message. "Financial services need to be as transparent as possible. Held accountable," he says. When we get to the executive level, we find spaces designated for interaction with clients-a waiting area furnished with Tom Dixon wing chairs in lush plum velvet, a suite of four dining rooms supported by a full-service kitchen.

To improve staff quality of life, amenities include locker rooms, with showers, and a planted roof terrace. "There's a mix of settings, like a clubhouse," Wilkinson says. On one level, a full-fledged café occupies a prime corner. Tall walnut tables are suggestive of tapas bars, while individuals can perch at the Corian counter. Not quite as spacious, a pantry at the bottom of the atrium, next to one of the trading floors, flows into a lounge furnished with a chesterfield sofa and chairs in tufted leather upholstery. Other levels have pantries and coffee bars hugging the atrium. "At Macquarie," Henry notes, "both breakfast and coffee have iconic status."