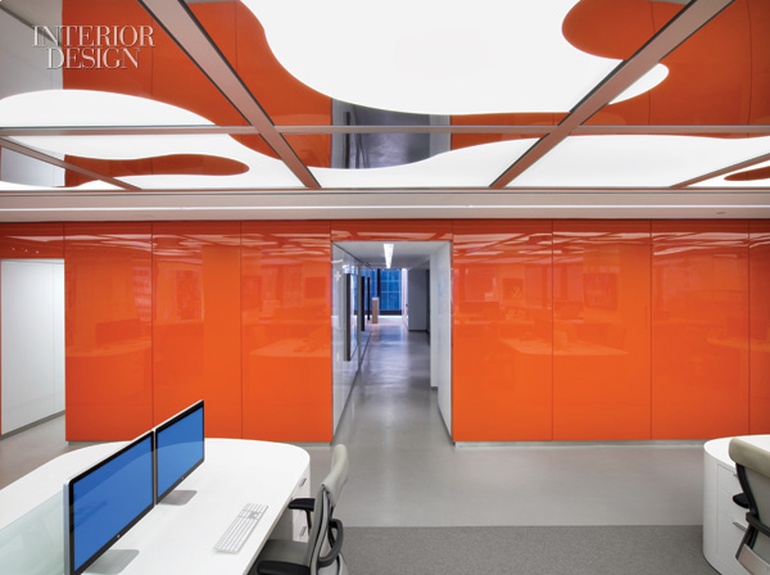 Few office towers are more revered than the Seagram Building, Ludwig Mies van der Rohe's masterpiece in bronze and glass. And few are as compulsively rational and rigid. Despite EnTrust Capital managing partner Gregg Hymowitz's reverence for this 1958 Midtown landmark, he felt that his two chosen design firms needed to break out of the box-even the ultimate modernist box-in outfitting 17,500 square feet of raw space on the 24th floor as the hedge fund's latest­ headquarters.

The art-collecting Hymowitz asked Gensler and William T. Georgis Architect to combine the edgy vibe of a downtown gallery with the panache of his Upper East Side town house. But accomplishing that is a challenge in the Seagram Building, where alterations are prohibited within 15 feet of its perimeter. The luminous dropped ceilings, low-to-the-ground radiator enclosures, and metallic mini blinds are all sacrosanct, protected by the building's landmark status.

Still, Gensler design director John Mulling explains, "Hymowitz wasn't interested in anything everyone else already has. Nothing standard." Mass-produced workstations and carpet were all off-limits.

That makes it all the more miraculous that Gensler completed its part of the job in near-record time, roughly six weeks of design and 16 weeks of building. As design principal Edward Wood recalls, "We started construction drawings while still designing." And without sacrific­ing quality. "The finish level is very high," regional managing principal Robin Klehr Avia says. Time was tight-but not so the budget. Wood adds, "Gregg didn't really have a figure in mind."

Gensler's interior breaks free of the corporate grid both figuratively and literally. "We're suspended in Mies's beautiful box, but more fluid shapes play against that rigidity," Mulling continues. Most fluid are surely the swirls of mirror-polished stainless steel installed beneath a luminous gridded ceiling that mimics the 5-foot module of the Mies original.

The shiny stainless reflects the lozenge-shape white Corian desks lined up on the office floor below. "There's an artfulness to the curves in the context of such an angular building," Wood says. And a purity. The desks contain and conceal virtually all extraneous items: printers, trash bins, everything short of the computer monitors. Gensler selected­ the white Corian in-boxes and paper-clip trays found on the desks, too.

Figural shapes even appear in the veining of the sumptuously multicolored Brazilian marble that lines the open pantry, above lacquered cabinetry. In fact, hardly an inch of plain painted drywall is to be seen throughout. Paneling and full-height banks of file storage in the office area are finished in tough polyester-resin lacquer in an Hermès-inspired orange. Columns, more subdued, are lacquered white. "There's a constant tension between shiny versus matte, slick versus raw, curving versus straight," Wood says.

The eye-catching art collection was assembled by a longtime adviser to —Richard D. Marshall was a curator at the Whitney Museum of American Art for 20 years and currently works as curator of the Lever House collection across Park Avenue. (Both Lever House and the Seagram Building are owned by contemporary-art collector Aby Rosen's RFR Holding.) Among pieces that Marshall commissioned for EnTrust is a screen of mirror-polished stainless-steel words, suspended in the reception area. The script speaks in snippets about its physical location: "Seagram Building," "New York," and "Earth" are discernable names in the jumble. Other notable works are a "spin" painting by Damien Hirst, a neon sculpture by Doug Aitken, and a taxidermy flamingo-dog hybrid by Thomas Grunfeld.

William T. Georgis furnished the reception area, the lounge, and Hymowitz's office suite, including a personal meeting room. Georgis's brief was again to do something different. "The furnishings take cues from the architecture—dis­ciplined, taut, minimal yet luxurious—while tapping into the primordial," he says.

Precious metals and bodily fluids inspired several of the custom de­signs—hardly typical corporate furniture. "The effect is luxurious but disturbing," Georgis says. In the lounge, an oval table practically dripping liquid gold stands on a rug with tufted spermatozoa. Hymo­witz's office features a biomorphic titanium­ desk and a sitting area with a solid sterling silver tabletop, a bullet-riddled mirrored credenza, and a "crime scene" rug in a blood-spatter pattern. Talk about a blood­bath on Wall Street.