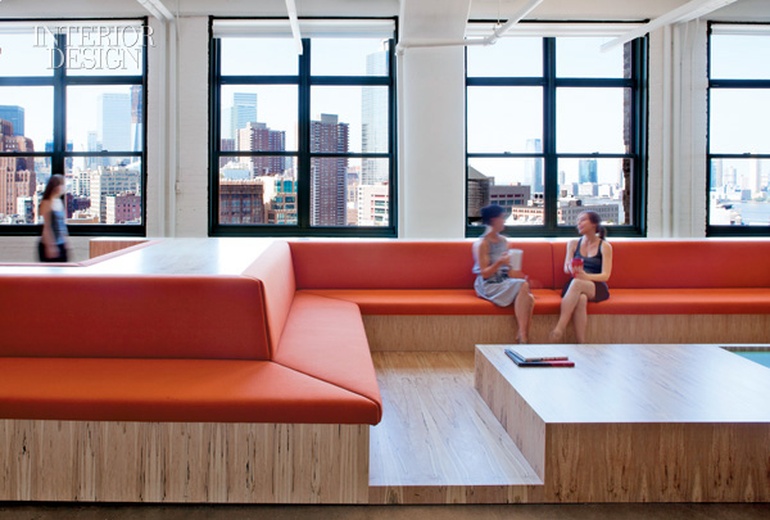 It's something of an unwritten rule in Manhattan real estate that 23rd Street marks the border between two distinct business worlds. More traditional corporations stay planted in the relative safety of skyscrapers above 23rd, while edgier companies prefer the creative wilds of lofts below. So Horizon Media, pondering a migration downtown, did not take the de­cision lightly—even though the move would allow the advertising and marketing agency to consolidate its three offices.

Before signing a new lease, the agency came to Architecture + Information, lamenting the lack of idea-sharing in current quarters. "When we realized how the silo Horizon had built up could be broken down, only downtown spaces had the infrastructure to support that," A+I principal Brad Zizmor recalls. He and his fellow principal, Dag Folger, helped sell Horizon's CEO, Bill Koenigsberg, on the high ceilings and plentiful windows found in a triangular corner building in Hudson Square, the city's former printing district.

The three-level, 120,000-square-foot space, the architects argued, could change the culture of the 650-person agency. "We took Horizon way out of their comfort zone, but they allowed it to happen," Folger says. "You rarely find that kind of trust."

While good bones meant that the initial renovation would be minimal—polishing the concrete floors, stripping the plaster off concrete columns—Folger and Zizmor became convinced that carving out a wide stairway and atrium would spark the kind of social environment Horizon was seeking. The real-estate team made a calculation accordingly and came back with one major question: Do you realize how much this stair's going to cost in square footage?

"They thought we were crazy," Folger says. "But the easiest way to encourage collaboration is for people to see one another constantly, not just in formal meetings." Plus, because the two flights are staggered, with 20 feet between, anyone arriving at reception on the top level enjoys an extra-long view of activity all the way down, making the office feel all the more energy-charged.

A+I followed that bold move by embracing two commonplaces of contemporary workplace de­sign. First, the architects virtually cleared the perimeter of enclosed spaces, ensuring universal access to the wraparound windows and softening the blow of the next big change: The open plan reverses the previous ratio of 80 percent offices to 20 percent workstations—the majority of staffers were asked to relinquish their privacy.

Office areas spread across all three levels, and walls, when they do exist here, are clear glass. Because of this, A+I took pains to reduce visual clutter wherever possible. Anyone walking past the workstations sees an expanse of white partitions rather than whatever mess may lie on coworkers' desks.

"Part of the exchange was to give people a full spectrum of open, semi-enclosed, and enclosed meeting spaces—for four, six, 10, or more," Folger explains. In return for the square footage saved, staff also got bigger and better communal amenities. A big misconception about open plans, Zizmor adds, is that "they're about throwing people together in one room. It's really about creating infrastructure in a more democratic and intelligent way."

The most obvious example dreamed up by A+I is a break-out area's low, asymmetrical seating landscape. Nicknamed the Dunes, it features sunken banquettes, upholstered in bright orange, alternating with table surfaces of spalted maple. Employees can come to the Dunes to meet clients, have lunch, gather casually, or even congregate en masse as an agency.

While the Dunes and an adjacent pantry-café are on the bottom level, one of the key directives A+I received from Horizon was to distribute key elements evenly over the three levels to keep people constantly circulating. The client-presentation room is therefore on the middle level. The reception area and the CEO's suite, complete with conference and screening rooms, are at the top.

Putting the presentation room at the heart of the office, rather than tucked away somewhere exclusive, was an idea that came directly from the CEO. The room's centerpiece—descending from a luminous ceiling cove that supplements any natural light that manages to penetrate to the space's core—is a video setup comprising 10 ganged monitors viewable from both sides. "In most conference rooms, everyone's in the dark, looking at this image on the wall, and there's no eye contact," Folger says. "Here, you can sit across from me yet be looking at the same content as I am, and we're fully engaged."

Right outside the presentation room are two more showstoppers. At the entrance, a cactus planter descends through the floor to partially appear in the pantry below, emphasizing architectural interconnectivity. Along a sidewall, a balcony cantilevers over the stair atrium, allowing meeting participants to step out to field phone calls or take breaks.

Before walking downstairs to the presentation room, everyone enters via a reception area where the receptionists are tucked away in a niche not immediately vis­ible—an approach more often found in hotels. Opposite is a digital media wall that abstractly represents Horizon's IT activity. Staffers are represented by blue dots. Clients, among them Capital One, Geico, and Kraft Foods, are orange blurs. As Folger explains, "That way, we avoided having a really literal display saying things like, ‘Welcome, Kraft!'"