Join the Fun: A Playful Daycare Center In Spain By ELAP 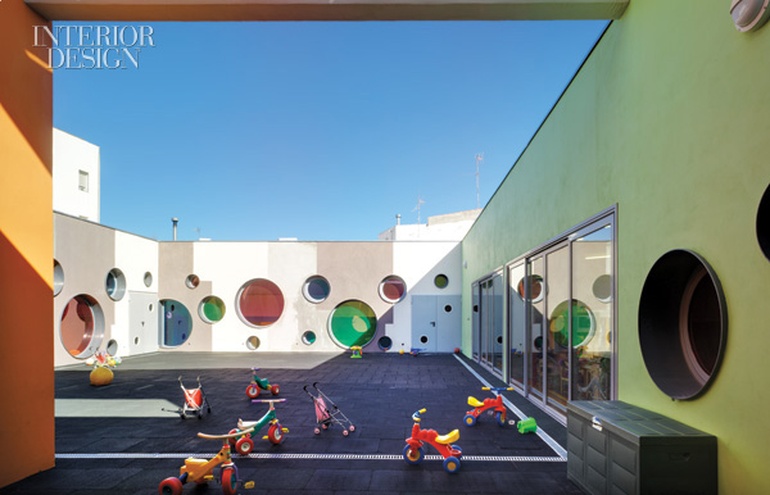 Eva Luque and Alejandro Pascual already had a 2-month-old son when their firm, ELAP Arquitectos Ingenieros, began designing a public day-care center in the sleepy town of Vélez-Rubio in the south of Spain. "With construction under way, we felt ‘pregnant' again," Luque says, heavy on the air quotes. After a five-year gestation period, the Guardería Municipal Vélez-Rubio finally emerged-at 9,400 square feet, tip to toe.

Luque and Pascual clearly consider the project their baby. They had always shown a refreshingly childlike, playful sensibility in commissions ranging from health clin­ics to art-related iPhone and iPad apps. However, designing a day-care center while taking a crash course in parenthood—as typically offered by the early stages of?child-rearing—helped to open the couple's eyes to the perspective of the very young.

Tots now gaze in wonder through the center's porthole-punched facades and toddle through its bright, graphic inte­riors, carefully laid out around a?central courtyard. Almost one entire­ side of the courtyard is occupied by a multipurpose room. Around the remaining sides, the eight primary rooms are clustered by age group: two nurseries for babies, three classrooms for kids up to 2 years, and three more for the senior class, ages 2 and 3.

Color plays a crucial role in the first few years of cognitive development, as young minds learn to solve puzzles and form sentences. The babies' nurseries are therefore blue, which promotes relaxation; ages 1 to 2 benefit from orange­, a psychomotor stimulator; and the oldest get green to evoke nature. In the common areas, suitably enough, all three mix in an upbeat metaphor of community. Funky ribbons of color on the hallways' vinyl flooring and wainscoting draw the children to gather in the multipurpose room, a generous space for lunch, snacks, and play.

At diminutive worktables in the multipurpose room and classrooms, children enjoy the warm daylight coming from clerestories that rise to meet the roof's impressively sloped slabs of concrete. Walls below­ open up through dozens of?round windows laminated with chartreuse, blue, or magenta film to wash the interior with a rainbow glow. Luque and Pascual hoped the children would enjoy the associations of roundness—the moon, Swiss cheese. "Mainly, though, we liked the fact that the lower part of the curved frames can serve as shelves, even hammocks," Luque says. "From an architectural point of view, any shape would have worked. Square, triangle, heart."

Focusing on the child's perspective helped free the team of conventional ideas. Spanish law requires a washing station and at least one closet adjacent to each classroom or nursery, and this facility complies—but not in the standard way. Instead of the government-recommended rigid partitions punctuated by glass vision­ panels, separation-with-supervision­ comes courtesy of transparent PVC-strip curtains borrowed from the food industry's walk-in freezers. "We made the connection between the?main room and the hygiene area totally flex­ible," Luque explains. The curtains hold back heat and sound, she adds, without creating a real barricade.

She and Pascual intended the outside of the school—with its sections of pitched roof—to look like a big Iberian house to its small occupants. "Not an anonymous container that could as easily be taken for an office as a day-care center," he adds. On the lower facade, stucco panels are tinted in shades of white, gray, and brown, deferring nicely to the more exuberant circular windows. Exterior gestures meant to connect with the children include imprinting the center's name, in big capital letters, on the concrete canopy sheltering the entry and painting the walls at the entry apple green to tempt the children inside, where the real magic happens.

Besides working wonders for the children, the building has garnered­ good buzz in the largely residential surrounding neigh­borhood. Like most small Spanish towns, this one is mainly populated by retired seniors, and they're delighted by the lively day-care center, with its sounds of children playing and running. The new Guardería Municipal Vélez-Rubio animates an old village with colors, shapes, and ideas.