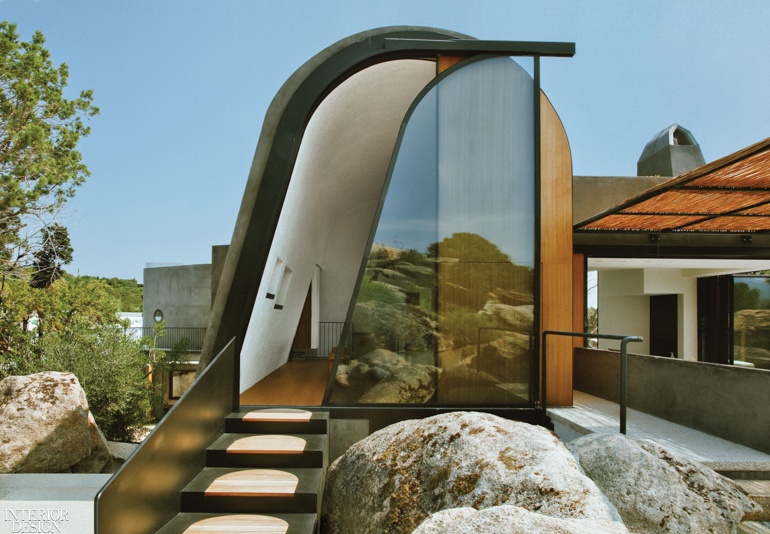 Stefania Stera has visited Sardinia all of her life. Born in Rome, the architect has lived in Genoa, Venice, Paris, and Fort-de-France, Martinique, but she always returns to the rugged Mediterranean island, where her family owns a granite quarry and has a house. “I’m very attached to my Sardinian origins,” confesses Stera, who founded her Paris-based firm, Stera Architectures, in 1992. As a child in the 1960s, she scrambled over the rocks, admired Cini Boeri’s brutalist Bunker House from the beach, and saw northeast Sardinia transform into a chic resort: the Costa Smeralda, or Emerald Coast. Decades later, Stera paid homage to her beloved landscape in a three-level, seven-bedroom villa in the town of Porto Cervo.

Stera had previously designed a house for the clients in Paris and understood their needs, so they largely gave her free rein with the 60-acre property. “They wanted a contemporary design inspired by the architecture of the Costa Smeralda,” she explains. Starting in the early 1960s, the Aga Khan developed this 35-mile stretch of pristine coastline into something of an anti-Riviera; strict planning guidelines called for low-slung buildings nestled into their surroundings. The development’s architects—including Jacques and Savin Couëlle, Michele Busiri Vici, and Luigi Vietti—used local materials and referenced vernacular structures. Stera, who had grown up visiting the construction sites of early hotels, aimed to create a “poetic link” with the Aga Khan’s vision.

Jutting into the Tyrrhenian Sea, the rocky site is dominated by an enormous granite boulder that Stera likens to a small mountain. It slopes down to a craggy inlet and white-sand beach, while oaks, myrtle, and mastic trees grow to the north. The previous house hadn’t taken advantage of its dramatic setting and the water views on three sides; Stera tore it down and removed its backfill, but otherwise preserved the land as much as possible. To start, she plotted two axes that determined the layout: one parallel with the sea and one perpendicular to
it leading to the road. Analyzing the terrain, she created a geometric plan with structures embedded in the site to make best use of natural features.

The house and a long patio form a U around a spare central courtyard, the main entrance. Four bedrooms occupy the ground floor of an L-shaped volume, with the east-facing master suite and southern living room upstairs. On the north side, the patio connects to a smaller structure with two more bedrooms and a caretaker’s apartment below; it also provides access to a roof deck via a cylindrical concrete staircase. Large service areas discreetly occupy the basement. (“The house operates like a small hotel,” Stera notes.) A winding garden path leads to the beach and an outdoor kitchen, fireplace, and dining areas.

“The challenge was adapting the layout to the rocks and the topography of the site,” Stera says. Her solution takes cues from the designs of the Couëlles, who often incorporated cavelike forms in their work. On the ground floor, she built grottos that serve as private patios and entrances to two bedrooms. Though they appear carved into the earth, they in fact sit on top of it, made of boulders and concrete with soil on top. Stera brought in additional granite rocks to use across the site; they line external corridors, stud the garden, and surround a pool resembling a secluded swimming hole. From some angles, they could be land art. The architect’s favorite view is off the kitchen, where a red stucco arch frames a rough stone like a Michael Heizer sculpture.

Despite the size of the project—the house and terraces total 11,840 square feet—it blends in with the scenery. Stera installed green roofs and coated the concrete structure with anthracite to match the black-lichen-covered granite. Azulejos-
style ceramic tiles made by local craftsmen brighten the patios in coastal shades of blue and green, colors that also appear in the lacquered caves. Inside, the materials palette similarly grounds the villa in its context, with floors of
gray sandstone or marble and custom wood furniture. Stera designed the simple pieces—like deep concrete-base lounges, teak benches, and ash bed frames—
to evoke a nomadic lifestyle, with the pared-down aesthetic of a tent.

“The house is an extension of nature and merges with it,” Stera says. “You live in the landscape.” In the living room, large sliding-glass doors on two sides open to create a breezy indoor-outdoor space, and swirling Indian marble floors extend to the bamboo-canopied terrace. A shower stall for the master bedroom is tucked into a curved niche off a terrace. With multiple openings in each room, spaces change throughout the day. The sun bathes the west-facing dining room with light in late afternoon, while in the morning, its reflection off the large boulder warms the white plaster walls. “The light on the rocks affects the ambiance indoors,” Stera explains. “Everything is in continuity.” At any hour, the house lets Sardinia shine. 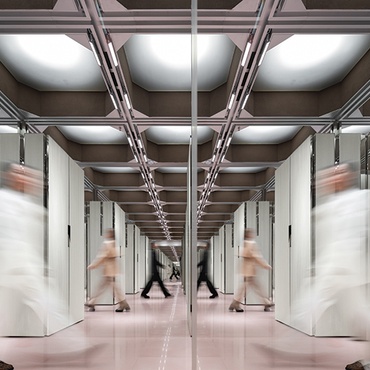