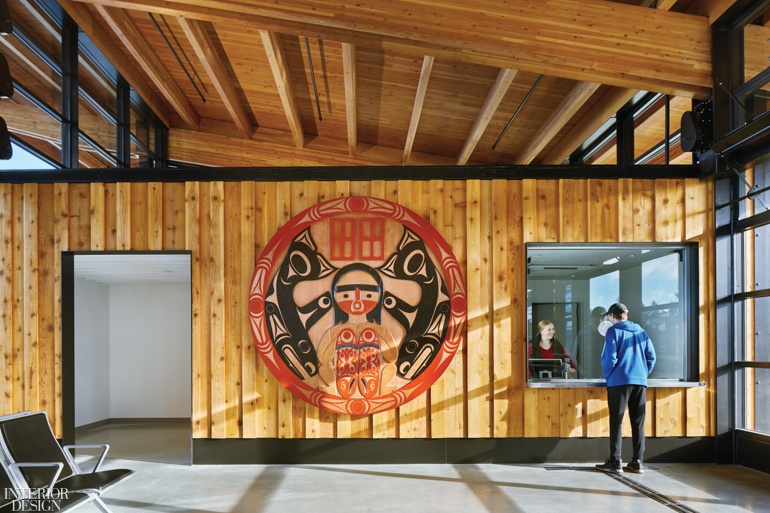 In Washington, traveling by ferry is more than a commute—it’s a beloved pastime. With the nation’s largest ferry system, the state’s department of transportation manages 21 routes crisscrossing the Puget Sound, carrying over 23 million passengers annually to the many islands dotting the Pacific Northwest and British Columbia. In Mukilteo, a city approximately 25 miles north of Seattle, LMN Architects has designed the first new Washington ferry terminal in 40 years, serving the West Coast’s busiest ferry route between the Seattle metro area and nearby Whidbey Island.

“This is a historically sensitive location for the many Native American tribes who have been here for thousands of years,” LMN principal Howard Fitzpatrick says of the site for the Mukilteo Multimodal Ferry Terminal, which sits on the tribally significant lands where the 1855 Point Elliott Treaty was signed. A watershed moment for the Indigenous people who ceded millions of acres of land to the U.S. government, the treaty also guaranteed perpetual hunting and fishing rights to the tribes on their ancestral lands. To honor that agreement, the terminal was conceived in close collaboration with over 11 local Coast Salish tribes.

“This is the first federally funded project in Washington that incorporates Native American cultural design elements throughout the entire site,” says Phillip Narte, the tribal liaison for
Wa­sh­ington State Ferries who coordinated with the Tulalip, Suquamish, Samish, Snoqualmie, and Swinomish Tribes, among others. “Early on, the tribes pointed out that nowhere in Washington is there a place that honors them for their immense gift of land in the treaty.”

The 5,865-square-foot terminal is poised to become that place, with tribal representatives calling for a design that expressed local Indigenous culture and tread lightly on the sacred site, which sits adjacent to a buried shell containing ancient tribal artifacts. The resulting two-story terminal is a contemporary spin on a tribal longhouse, the type of building traditionally used for Native American community gatherings and ceremonies. Materials nod to the fusion of past and present, with LMN improvising on the post-and-beam form with composite steel and Douglas fir columns supporting a shed roof made from locally sourced CLT.

Western red cedar, a vital tree species for Coast Salish tribes, was chosen for cladding on the terminal and adjacent toll plaza. “Although responding to a traditional building form, our goal was to also create a modern building for these tribes,” Fitzpatrick notes. “Rather than treating tribal culture as if it were frozen in time, this was an opportunity to respect that culture as it exists today—and as it will exist tomorrow.”

Modern interpretations of traditional Salish art weave through the project, locating the region’s rich tribal heritage squarely in the present. If arriving by car, ferry passengers drive through tollbooths adorned with a pair of red and black Salish welcome figures by Suquamish artist Kate k'yk'ablu Neayuq Ahvakana. Widely used in many Indigenous nations, welcome figures hold spiritual significance for tribal members and are found throughout the terminal. “My hope is that people who see these figures will feel a sense of acknowledgement and curiosity as they transition from land to sea,” Ahvakana says.

Walk-on riders enter the terminal via a pair of elevator bays bookending the building, fronted with colorful fused glass murals by Tulalip artist James Madison; they depict orca whales and salmon swimming past ghostly renditions of his own grandparents. “It’s a message about protecting our waters, because our waters are our livelihood,” he says. “The art helps educate people about their surroundings.”

Inside the upper-level waiting and ticketing area, more Coast Salish artworks enliven the double-height space alongside sweeping views of Possession Sound. Interpretive panels explain the art’s cultural significance, as well as the LEED Gold–targeting building’s environmental features. LMN associate Mette Greenshields, who led the terminal’s construction and the building performance, explains, “The project’s sustainability aspects help teach the community that this is a way forward.”

The all-electric facility is powered by a solar-photovoltaic system and relies on passive cooling with windows that automatically open and close for ventilation in response to temperature. “It’s another way of respecting the land: being consid­erate of how we use energy and sit on the site,” Greenshields continues. The concrete-slab floor is heated by air-to-water heat pumps, and a rainwater harvesting system includes pervious concrete in the vehicle waiting area that filters stormwater through sand before returning it to the sound.

With bus and train lines feeding directly into the new terminal, and WSDOT preparing to launch its first hybrid-electric ferry here, the terminal is leading the region in green transportation design. With ridership projected to double over the next 20 years, even more people will experience the tribal heritage animating the building. As they do, this vibrant Coast Salish culture will not only be seen but also sustained.