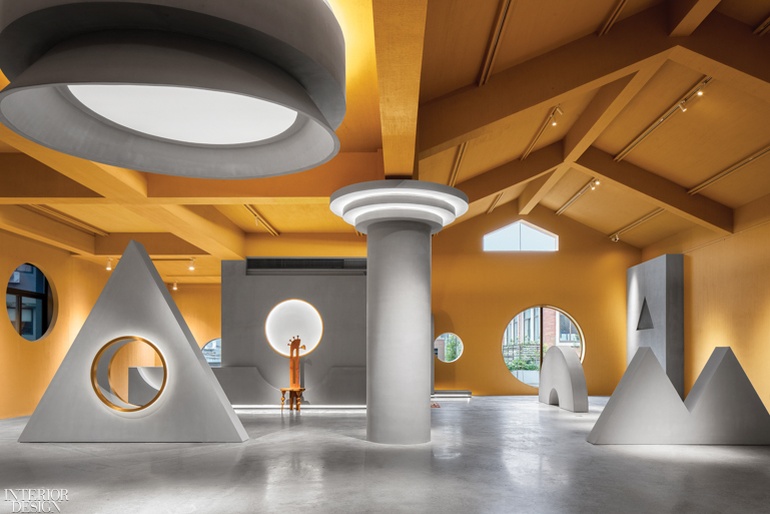 In the design world, the 1980s are perhaps best remembered for their definitive rejection of modernism’s austerity in favor of excess. Interior Design Hall of Fame member Robert Venturi put it best with the idiom “less is a bore,” paving the way for an American return to color, pluralism, and a Miami Vice aesthetic. At the same time, over in Milan, a group of mostly European designers led by Italian architect Ettore Sottsass took a deep dive into experimentation with postmodernism. They eventually resurfaced as the Memphis Group, named after the Bob Dylan song "Stuck Inside of Mobile with the Memphis Blues Again" that was looping in the background as they brainstormed in December of 1980. Though only officially together until 1987, the collective’s joyous output of furniture, lighting, textiles, and ceramics was marked by euclidean geometric forms juxtaposing fanciful patterns. There was a spirited quality to the products that hacked high art for the masses.

Fast forward four decades. The Italian company Memphis Milano continues to produce original designs today that are purchased by collectors worldwide. The reach has even extended to China, where a gallery-esque showroom called Ya Space in Hangzhou is the official dealer of Memphis—and a total embodiment of the group’s aesthetic. The two-story project is by Pig Design, a local architecture studio cheekily named after founder and chief designer Wenqiang Li’s especially tubby cat. Ya Space has an equally playful derivation: The Chinese nickname of Memphis, Tennessee, is Cliff City, and cliff is pronounced like ya in Chinese.

That theme carries over to the structure’s facade, which is composed of corrugated stainless-steel triangles that make up three-dimensional tetrahedrons, pyramids, and other pointed shapes. It’s an introduction to the unusual silhouettes that  that define the showroom, both inside and out. “Memphis ideals are independent and self-contained, and its forms and colors are vivid and dynamic,” Li begins. “The project fits with Memphis Milano’s pursuit to localize unique modern design.” One in which Li and his team conceived as visualized through a global lens.

Take the entry. Wide granite steps, downlit in a space-agey manner, lead up to a deep portal, the round glass door inside it emblazoned with a copper excla­mation point, a larger version of the one in the company’s logo. Inside, where the landscape is populated with geometric plinths and columns and warm tones, it’s clear that Ya Space isn’t a typical furniture showroom. “Memphis offers a different take from more conventional design rationale,” Li says. “It pursues freedom and romance, which resonates with young people today.” Li built upon that freedom and romance for the concept of the showroom.

With the exception of a small restroom on the second floor, the entire 4,800-
square-foot interior is devoted to display spaces that reinforce the Memphis aesthetic through variations on 3D circles, arches, and triangles. Also in a nod to Memphis, terrazzo, often found in the group’s pieces, is the main flooring material throughout, and, similar to its play on elevating inexpensive materials, most of the geometric interventions are made from humble cement.

That’s immediately seen once inside. Designed on an angle to suit the site’s configuration with Hangzhou’s grid, the foyer connects to the main hall via islandlike platforms, each a different shape and height. With its internally lit circular and triangular elements, all in pale-gray cement, the hall itself feels like a piece of supersize Memphis furniture and helps amplify the objects on display, such as lamps by Sottsass and Martine Bedin and furniture by Michele De Lucchi, Gaetano Pesce, Peter Shire, and Li himself. “We liberally adopted the free-form compositions that mark the Memphis style,” Li explains. “At the same time, our selection of materials and colors, namely gray, copper, and yellow ochre, plays on texture and other concepts, to go beyond Memphis’s emphasis on the visual.”

That subtle play is at work in the staircase connecting the project’s two floors. Capped by what appears to be an enormous round skylight but is actually a light fixture, wide terrazzo steps have an army of golden waist-high posts marching up alongside them as a balustrade. “We really hope to transport visitors to the Memphis Group’s original intent,” Li continues.

In contrast to the architectural components downstairs, the second level utilizes partial-height partitions to divide its open space. Circular windows of varying diameters allow for a dialogue between the serene interiors and the buzz of urban life glimpsed through the glass. The round form is repeated in platforms, ceiling-mounted light fixtures, and the st­y­lized capital topping a central column. Expanses of flat walls allow for the display of two-dimensional Memphis pieces, like a graphic wool rug by Nathalie Du Pasquier, who, along with Bedin, were the group’s youngest and only members. With the simplified palette, each object at Ya Space is elevated, given proper deference. But the environment is not so pared-down that it looks generic. “Chinese interiors have been dominated for a long time by the frigidity of Nordic countries or a neutral minimalism,” Li says. “It can all look the same. Memphis, and this project, offered us an impactful way to shake things up.” The hope is it will raise awareness of postmodern culture in Hangzhou and throughout China—a second Ya Space in Shanghai is in the works.