May 17, 2021
By Monica Khemsurov
View Slideshow 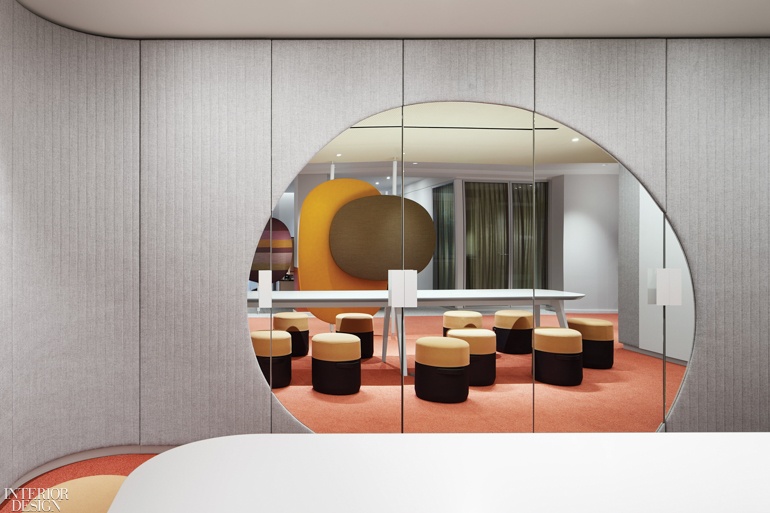 In Germany, virtually anyone who grew up in the second half of the last century and owned a TV would be
familiar with Aktion Mensch. It’s a nonprofit organization, the country’s largest in the social sector, that hosted a beloved game show, Der Große Preis (or The Great Price), on network television from 1974 to 1992. Part of the show was devoted to a lottery that still exists today and funds the foundation’s core mission: to provide aid for projects that support people with disabilities, and to advocate for equality and inclusion in German society as a whole. In fact, its motto is “Together we win.” Aktion Mensch’s public-facing work includes creating education campaigns and offering grants to grassroots advocacy groups. But a recent renovation of its five-story headquarters in Bonn gave the nonprofit the chance to see its values on display internally, as well. The new space, spearheaded by Ippolito Fleitz Group, manages to neutralize disabilities while celebrating them at the same time—a place where differences are normal.

Keeping that “we” in mind, reenvisioning Aktion Mensch’s 40,000-square-foot office was a highly collaborative process that took nearly three years to complete. While the majority of the brief was straightforward—transitioning from closed offices to open-plan, improving acoustics, incorporating up-to-date digital tech­nologies—the project also had to take into account a nonprofit’s budget, the wishes of its donors, and the specific needs of the nearly 15 percent of Aktion Mensch’s employees who have disabilities themselves.

After months of workshops between reps, the workers’ union, and the Ippolito Fleitz team, the architects
developed a prototype that was tested and refined, then rolled out slowly, giving employees a chance to get used to the change. “It was important that the staffers really agree that this was a good project,” begins
Ippolito Fleitz managing partner Peter Ippolito, who, along with co-managing partner Gunter Fleitz, is a member of Interior Design’s Hall of Fame. “A socially driven, human-centric organization has a much higher consciousness about those things than a commercial one.”

Much of the knowledge-sharing that took place during the design phase had to do with accessibility. While the building, completed in 2004, was already somewhat wheelchair-friendly, Aktion Mensch brought to the table a nuanced list of considerations for those with learning disabilities or impaired sight or hearing—as well as cutting-edge ideas for accommodating them. In addition to outlining industry standards for sink and handle heights, aisle widths, and curtain clearances, the Aktion Mensch team, led by project manager Clemens Hollingsworth, advocated for the scheme to be “mobile first,” he says. “It helps people with disabilities tremendously when everything relating to their daily needs can be combined in one tool.” One such example of this is the installation of iBeacons at the office’s bus stop, main entrance, and first-floor conference rooms; they trigger visitors’ phones to display guidance and information in their preferred format, such as a reading service for the blind or a graphics-based representation for those with learning disabilities.

When it came to considering the needs of the employees themselves, color played a huge role in functionality, particularly when it came to spatial orientation. Not only do high-contrast colors make it easier for those with visual impairments to delineate between spaces but colors also make for a simpler wayfinding system for the learning impaired. Ippolito Fleitz took this information and used it to solve a key problem at the heart of the project: the building’s labyrinthine layout, an endless sequence of identical corridors and staircases that couldn’t be altered architecturally. The firm devised a neighborhood system that breaks down the office into eight more-digestible departmental zones, each assigned its own color scheme and ultra-simple name, like blue swimming pool, pumpkin market, and red-rose garden. Each neighborhood has a central lounge that serves as a welcome area and features walls, ceiling decals, and carpeting in its signature bright hue, while sharply contrasting carpet colors define the boundaries of adjacent meeting rooms and workstation areas.

Also adding liveliness to the interiors is a system of modular acoustic panels—available in a menu of densities, textures, and shapes—that each employee  can configure for their own work space to suit their aesthetics and level of privacy. Mounted to easy-to-install-and-deinstall floor-to-ceiling tension rods, the panels (as well as the mirrors in conference rooms) were purposefully designed to be charmingly asymmetrical and uneven, as a metaphor for the organization itself. “The shapes all have their own personalities,” Ippolito notes. Seeing them deployed throughout the office in unique ways, he adds, resembles “a gathering of diverse characters, doing something great together.”

Despite the project’s appreciation for diversity, however, it doesn’t immediately appear to be a workplace for differently abled people. By keeping the focus on universal design—making sure, for example, that every table is height-adjustable and has extra space around it, not just those meant for wheelchair users—Ippolito Fleitz ensured that the end result would accommodate disability without singling anyone out, making it a beacon for Aktion Mensch’s message of inclusivity. “Every space is accessible for everybody,” Ippolito states. “It sends a strong signal that however you come, you’re welcome, and we’ve created space for you to perform your best.”