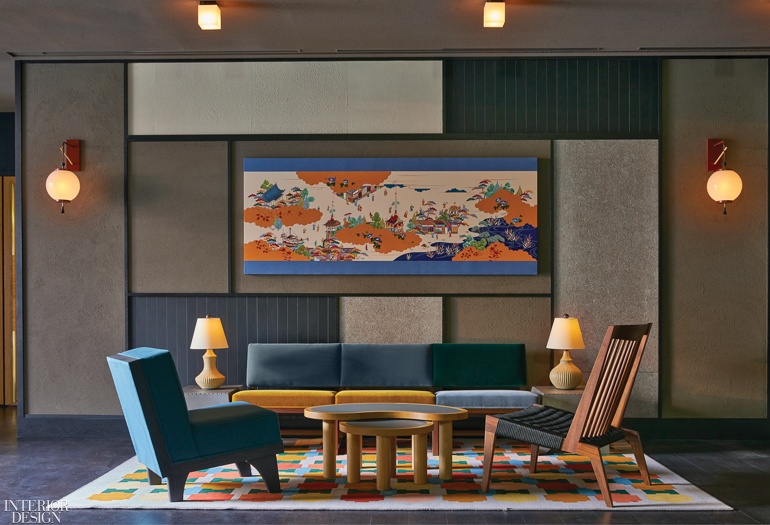 When the Ace Hotel Group was looking for a location for the brand’s foray into Asia, the historic Japanese city of Kyoto was firmly on its radar. “Kyoto has been a muse for everyone from musician David Bowie to film director Akira Kurosawa, as well as an inspiration to Ace from our very beginnings,” Brad Wilson, the international chainlet’s president, notes. “Its centuries of celebrated artists and artisans have had a major impact on the way we look at craft and functional design.”

Potential sites came and went, until a unique property with a rich backstory—something of an Ace specialty—became available. Known simply as Shinpukan, the handsome brick building was designed in 1926 by pioneering modernist architect Tetsuro Yoshida, who was strongly influenced by European and Scandinavian design. Formerly home to the Kyoto Central Telephone Company, the landmarked structure—the first registered Cultural Property in the city—was poised for redevelopment, awaiting occupants who would appreciate its rare East-meets-West aesthetic.

“We were excited by its fascinating union of worlds and saw a unique opportunity to add a special layer to that cultural dialogue,” Wilson says. The resulting 213-room hotel, set around a leafy courtyard, is a collaboration between Japanese architect and Interior Design Hall of Fame member Kengo Kuma and longtime Ace partner Commune Design.

The Kengo Kuma & Associates principal, whose projects include the new National Stadium in Tokyo and the Portland Japanese Garden in Oregon, was tasked with overhauling the heritage three-story brick structure and adding a larger, seven-story-plus-basement annex to create a harmonious whole. “The old building is not only Yoshida’s personal masterpiece but also a precious cultural asset,” Kuma says. “It was absolutely necessary to preserve it.” The 1926 building houses two floors of guest rooms above ground-floor retail. While more retail space occupies most of the addition’s basement and street levels, the latter also accommodates the spacious hotel lobby, lounge, and coffee shop; along with guest rooms, the six floors above include a ballroom, conference spaces, bars, a gallery, and two
restaurants (with a third to come).

The new building’s striking gridded facade—a bold mix of Kyoto cedar columns and beams, precast panels of concrete mixed with iron oxide to make it inky black, and slatted aluminum awnings with a rustlike finish—references the city’s famous machiya town houses with their wooden lattices, folding shutters, and tile roofs. Cedar appears inside, too, where such elements as the lobby’s interlocked kigumi ceiling are a testament to Japanese joinery skills.

Commune was asked to create an interior that resonates with the location. “It was our job to tie the project together,” says firm co-founder and principal Roman Alonso, who has been visiting Japan since the 1990s. “In terms of furnishings and finishes, we immediately thought to root it in arts and crafts—and in the idea of the East and West meeting together through them.” Alonso was guided by Shinichiro Nakahara of the Tokyo design firm Landscape Products, who introduced him to an impressive lineup of Japanese artists and craftspeople. The result is a textured interior, rich in detail throughout: There are large ceramic pots by fisherman-ceramicist Kazunori Hamana; earthy Shigaraki stoneware tiles lining walls; a lobby textile installation from Shobu Gakuen, an artist community in Kagoshima; and presiding magisterially over them all, works by the legendary mingei folk-craft artist Samiro Yunoki, a master of katazome, the stencil dyeing of paper and textiles. Yunoki, whom Alonso describes as “the godfather” of the project, is still hard at work at age 99 and more in demand than ever. He created noren
curtains for the lobby, artworks for each guest room, and even the hotel’s logo and custom font.

Contemporary design is mixed with vintage, while Japanese works sit next to custom pieces from Scandinavia and the U.S.—there are rugs by George Nakashima and echoes throughout of Frank Lloyd Wright and Antonin Raymond, both architects with strong connections to Japan. The exhilarating mélange continues in the guest rooms, which have custom furniture influenced by Charlotte Perriand’s 1940s sojourn in Japan. Upholstery fabrics by Tokyo fashion designer Akira Minagawa, Pendleton wool blankets, tatami-lined tables, and wood-paneled bathrooms all blend to create a comfortable ambience. Each room has a wooden bench at the entrance where shoes are removed, Japanese-style. Record turntables with a selection of vinyl albums add to the at-home vibe.

Guests will love the central location, a short stroll from Nishiki Market and the Museum of Kyoto. The adjacent small streets house some classic Kyoto businesses such as Kamesuehiro, a 200-year-old confectionery shop, and Shoyeido, a 12th-generation family-run incense maker. There is even an art-house cinema in the basement, just the place to rediscover the incomparably beautiful movies of Kenji Mizoguchi, who as a young director worked in—and was inspired by—Kyoto.