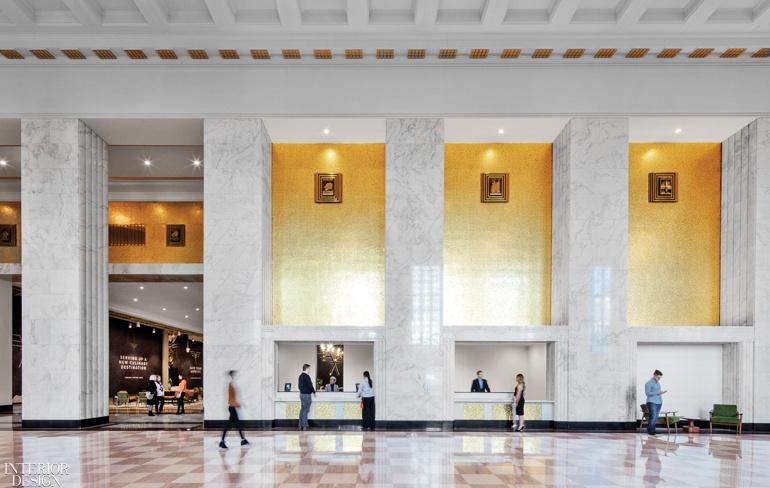 That Gensler was tapped to renovate and repurpose the Old Chicago Main Post Office into a mixed-use hub for business and commerce comes as little surprise. After all, it’s the city’s largest building—encompassing 2.8 million square feet—and the largest adaptive-reuse project in the U.S., so it makes sense that it was masterminded by the world’s largest design firm. Though the nearby Merchandise Mart boasts more square feet, 4 million, according to Gensler principal and design director Russell Gilchrist, “the Mart could actually fit inside the post office.” That’s because the post office is not a skyscraper, it’s what he calls a “groundscraper,” spanning three city blocks.

For more of the backstory, Gilchrist hands the envelope to Gensler principal and global office buildings repositioning and landlord services leader Sheryl Schulze. “Designed by Graham, Anderson, Probst & White, it was built in two phases,” she begins. “In 1921, came the east building, a six-story brick structure to house the early post office days.” Phase two, erected between 1932 and 1934, added two limestone buildings that bookend the existing structure. The 12-story, north-facing edifice has the main entry. Its larger counterpart to the south rises nine floors. Everything is conjoined to create a unique complex, albeit one that presents some offset floor levels. But that’s good. The result are “large floor plates that I like to think can be designed similar to residential lofts, with one
culture per level,” Schulze says.

It was 1997 when the USPS moved to a smaller building nearby, leaving the Old Post Office vacant for years. In 2016, it was purchased by 601 West Companies. By that time, the structure had been placed on the National Register of Historic Places and later accorded status by the Commission on Chicago Landmarks. Ergo 601 West’s overarching words to Gensler: Don’t cut a lot of holes, use the lightest touch possible. Gensler’s concern was “transform­ing a factory warehouse into a modern workplace,” Gilchrist says, “and being able to move people around a floor  plate roughly the size of an airport terminal.” Further, the Eisenhower Expressway bifurcates the building at grade, a railway line covers the entire footprint below, and both transportation modes needed to be operational throughout the renovation.

In the broadest of strokes, the program for what’s now officially called the Old Chicago Post Office, nearly five years in the making, entailed cleaning, polishing, and organizing the ground floor with new points of entry, including for Walgreens, the first tenant, and another along the Chicago River bank for access to the food hall, still under construction. Also needing access was the second floor, given over to a sweep of new amenities—a gym and a cocktail lounge among them—and the elevator banks leading to upper-level offices. Leasing space to tenants began in 2018, and interest has remained steady through the COVID-19 pandemic.

Starting outside, the limestone faces were cleaned and restored. Some 2,200 windows received new glazing, their old steel framing replaced with aluminum. Inside, the lobby, a 350-foot-long grand hall that’s open to the public, reveals gems of the art deco era: flooring of amber and white checkered marble, brass grillwork, alcoves clad in gold mosaic tile—all of it retained and extensively cleaned. Slight alterations happened on the ceiling—newly plastered for the installation of and access to new HVAC systems but its gold leaf replicated—and the 6-foot-long 1920s pendant lanterns newly fitted with LEDs.

More of the past appears farther in, in the concierge area, where the envelope and mood skew more industrial. Marble flooring gives way to concrete and the ceiling is exposed. (Yes, one hole was cut.) Behind the reception desk, brass-finished, floor-to-ceiling shelving displays relics salvaged from the building as well as vintage objets interspersed with oversize images of the interiors captured just prior to demolition. A sprawling Lindsey Adelman pendant fixture presides over the sitting area, furnished with roomy leather-upholstered sofas and lounge chairs.

But it’s perhaps the second floor that’s the real draw here. Escalators transport tenants, expected to eventually tally 12,000 workers, up to 63,000 square feet of amenities rarely seen in a workplace. En route, a stylized brass eagle, abstracted from one on the facade as the building’s new logo, hints at what’s to come. The upper landing platform is pure charm. The Gensler team sourced vintage postcards, scanned them to create wall covering, and then mounted some of the real ones on top for texture.

Beyond that installation, it’s all modern-day charm. There’s Boxcar, the 26,000-square-foot fitness center, which Gensler named after the train cars that used to enter the building to deliver and retrieve mail, and includes, among other features, a regulation-size boxing ring. For the more recreationally minded, Telegram Lounge offers a bocce court, billiards table, fireplace, and a showstopper of a bar. For quiet types, the
Library is actually a 1,700-square-foot co-working space, its name a nod to the division of the Chicago Public Library formerly on-site, outfitted in stunning, acoustics-dampening wool rugs from Pakistan. As if these perks weren’t enticements enough, Telos Group, the leasing agent, has equally attractive sales quarters, a clubby setting with leather-upholstered seating and a Calacatta Tucci–clad fireplace.

The enormous $800 million endeavor is still a work in progress. The 3 1/2-acre rooftop park boasting a ¼-mile running  track, basketball and paddle courts, and bee colonies was just completed. Forthcoming is the food hall. “The building is well-positioned for the new reality, integrating fitness, opportunities for socialization and focused work, and ample access to the outdoors,” Schulze explains. It’s Chicago’s—and Gensler’s—21st-century answer to you’ve got mail.