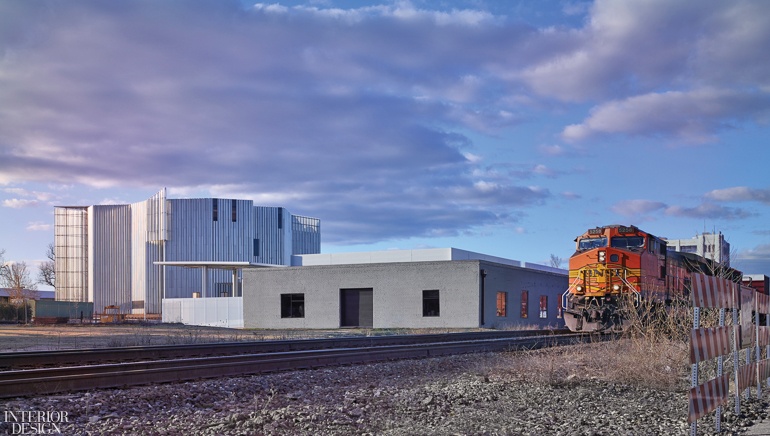 When it comes to Oklahoma, if anyone can sense a place and create a sense of place, it’s Rand Elliott. The state’s
culture, nuances, and history are engrained in the architect’s DNA. He still has vivid memories of childhood tractor rides on the farm where he was born and raised until, at age five, he moved with his family to Oklahoma City. He’s lived and worked there ever since, establishing Rand Elliott Architects in 1976. Three decades later, having produced a distinguished portfolio of mostly regional projects, he was inducted into the Interior Design Hall of Fame. Given that resume, Elliott’s winning the commission for a new building for the relocating Oklahoma Contemporary Arts Center, the region’s leading institution for contemporary art education and exhibitions, was all but a forgone conclusion.

Elliott begins every project with a singular approach. Not with a sketch or a maquette but with what he calls “word paintings.” For OCAC, his verbal picture was “folding light,” which he came up with almost 10 years ago while participating in the project’s early impact studies and focus groups. “Every place has unique considerations,” Elliott reasons. “In Oklahoma, we have Native Americans, the Dust Bowl, Woody Guthrie, the 1995 bombing, the ups and downs of the oil and gas industry.” But in formulating his concept, he eschewed references to any of these; he was looking for something more timeless. What is timeless in Oklahoma City is the quality of light and the constantly changing weather. In fact, extreme conditions, including 50-degree temperatures, two inches of snow, and 60-mile-per-hour winds, occurred during the OCAC’s eight-day photo shoot last winter.

The REA team, led by Elliott and principal Bill Yen, devised a four-story structure of angular planes as the gutsy centerpiece of the 4-acre campus. In accord with the embryonic image, “the building folds, and light moves over its surface,” Elliott explains. For that surface, he sought a matte material that would allow “the light to be captured and let it stand, not reflected.” That substance is recycled aluminum, crafted as extruded fins in nine different shapes, their flat or
angled surfaces assembled randomly to form a skin. The vertical members lock together and screw onto horizontal battens at various attachment points on the structure. “They’re unique, not static,” Yen notes. “They’re constantly changing. Every day they look different.” Elliott likens the assemblage to that of a rain screen, incrementally expanding and contracting: “Water goes through the metal and drains to the bottom. The building can cool itself, making it energy efficient.” The steel and concrete structure has minimal glazing and is sealed with a waterproof membrane to protect artworks that are stored temporarily before they’re exhibited.

Another component of the architectural composition, which explores folds at both macro and micro scales (the planes and the fins, respectively), is a corner beacon. Light from LEDs streams out through its fins. In fact, it’s the first thing seen when approaching the center from the street. Curiously, there is no front entry; that’s around the corner at the rear, off the parking lot—a scheme that makes perfect sense for “a city of 600 square miles with lots of cars,” Elliott notes.

Oklahoma Contemporary Arts Center is precisely that: a participatory nexus for various cultural activities. Sure, at 54,000 square feet overall, there’s plenty of interior space given over to exhibitions, corridors included. “It allows the building to be porous,” Elliott explains. Otherwise, the program plays out as follows: The ground floor is mostly a gathering space, with conjoined lobby and café, lounge, gift shop, and classrooms, none of them square and each with its own gallery for budding artists of all ages.

The main gallery, which, at 8,000 square feet, occupies most of the second floor, extends onto a terrace that overlooks the great lawn and has already hosted outdoor performances. Nearby is the learning gallery,  presently displaying Elliott’s sketchbooks and photographs illustrating “how to make architecture”; a small sound studio for podcasts and classes; and an artists-in-residence space, currently in development. The third floor comprises a 200-seat black-box theater adjoining a dance studio with a mirror wall, sprung floor, and huge windows, enabling it to double as an events space.

The fourth floor is reserved for administrative offices, including that of director Eddie Walker, who gets a view of the state capitol’s dome. Connecting all the levels is a ceremonial staircase that, with its angles and balustrades of illuminated polycarbonate tubes, is “like an M.C. Escher work,” Elliott suggests. Completing the campus, a 1910 former lightbulb factory across the street has been annexed, restored, and turned into studios for ceramics, jewelry making, and woodworking.

OCAC’s opening gala for donors was March 12. The public launch, slated to begin the following day, didn’t happen because of the COVID-19 shutdown. At the moment, the center is open to ticketed attendance so visitors can see the inaugural exhibition, fittingly called “Bright Golden Haze,” taken from a song in the Rodgers and Hammerstein musical Oklahoma! Artworks by Olafur Eliasson, Robert Irwin, Camille Utterback, and Leo Villareal are among those interpreting the theme. Just like the building, they conjure magic with light.