The holiday season inspires visions of sparkling décor—from festive gold tableware to ringing silver bells—so we rounded up an array of projects featured throughout 2019 with decorative details that shine.

Department of Architecture Co. Takes a Fresh Look at Shingles for a Northern Thailand Inn

What makes a shingle a shingle? That was the question Amata Luphaiboon and Twitee Vajrabhaya Teparkum, Department of Architecture Co. principals, asked themselves for Little Shelter, an inn in Chiang Mai, Thailand, that the firm designed and which Luphaiboon co-owns. Wanting to be sensitive to the region’s centuries-old architecture, they decided to take a fresh look at the venerable building material—both outside and inside. Read more about this project

Even luxury can come in small packages. Take this 430-square-foot studio in the West Village. Although it’s situated inside a standard white-brick co-op from the late 1950’s, its location and penthouse views that stretch to the Hudson River compensate for the building’s lack of curb appeal. But everything in the apartment had to go. So in walked Messana O’Rorke with brass accents (and more) in mind. Read more about this project

Architect Carol Kurth, whose practice is based in Bedford, New York, and Interior Design Hall of Fame member Laura Bohn joined forces on a six-bedroom house in Connecticut that covers a total 15,700 square feet on three levels. The focus was on soft modernism, providing plush comfort to counter the interior’s naturally hard surfaces and inlcudes an array of shimmering touches, such as the dining area’s aluminum-tube chandelier. Read more about this project

The grand structure from 1907 that hosts Milanese designer Massimiliano Locatelli’s lower Manhattan abode was designed to house offices. While most such lofts offer long spaces devoid of architectural detail, with windows only at the two narrow ends, this one boasts three exposures and three massive street-facing windows. Stainless steel and a paint color inspired by Italian Riva motorboats accent the kitchen. Read more about this project

The new Western-Japanese fusion restaurant Umi landed on the 4th floor of the luxe Swire Properties mall in Shanghai, but its inspiration can be found far below that. Accessed via a private lift across from a modern Zen garden terrace, complete with a covered walkway, Umi was named after the Japanese word for ocean, and shimmers with aquatic aesthetics—including a private dining space featuring a custom art piece of brass-finished wire mesh, which pays homage to the shape of oysters. Read more about this project

They both hail from China, but Dongzi Yang and Qianyi Lin went abroad for school—and stayed there. In 2009, they met at the University of the Arts London, where Lin studied interior design and Yang architecture, and went on to the Royal College of Art for master’s degrees. In 2017, both just 28 years old, they founded Various Associates, a collective of spatial, graphic, interactive, and product designers working on inter­national research-based projects. One such project is Morph, an 11,000-square-foot event venue in Shenzhen, Lin’s hometown and a relatively new city in a country grounded in tradition. Read more about this project 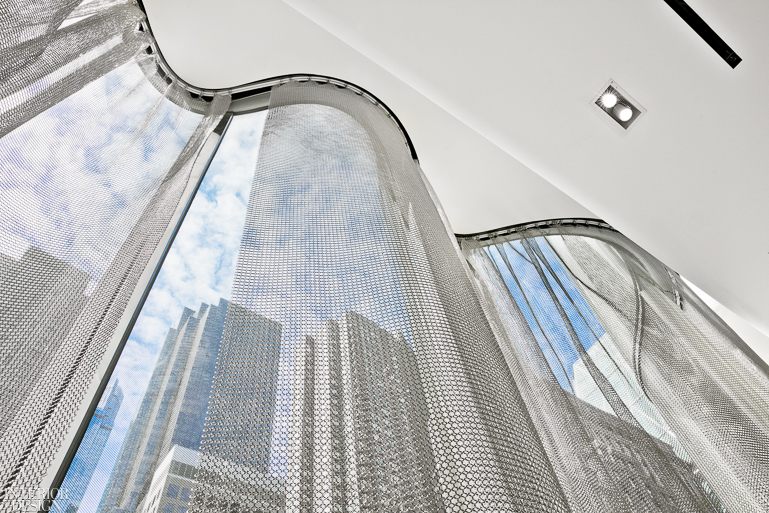 Seattle-based department store Nordstrom debuted its New York City flagship today, a 320,000-square-foot, seven-floor women’s fashion mecca on West 57th Street that features a unique waveforms glass façade with chain mail veils and lighting effects as well as interior spaces that include seven distinct dining venues and concept shops by Nike and Burberry. The building’s striking design by James Carpenter Design Associates opens the retail experience to the street for both shoppers and passersby. Read more about this project

Hotel Calimala, one of Florence's newest and freshest hospitality venues, is a 38-room   transformation of a 19th-century palazzo, officially Palazzo degli Angeli, which last housed offices. Credit goes to architect Alex Meitlis, who divides his time between Tel Aviv and London, where he is known for the design of Yotom Ottolenghi’s restaurants. A happy marriage of the historic and the modern, Hotel Calimala retains the detailed sgrafitto frescoes of its exterior, while its interiors are now a sophisticated canvas of marble, terrazzo, contemporary custom furnishings, and artwork. Read more about this project 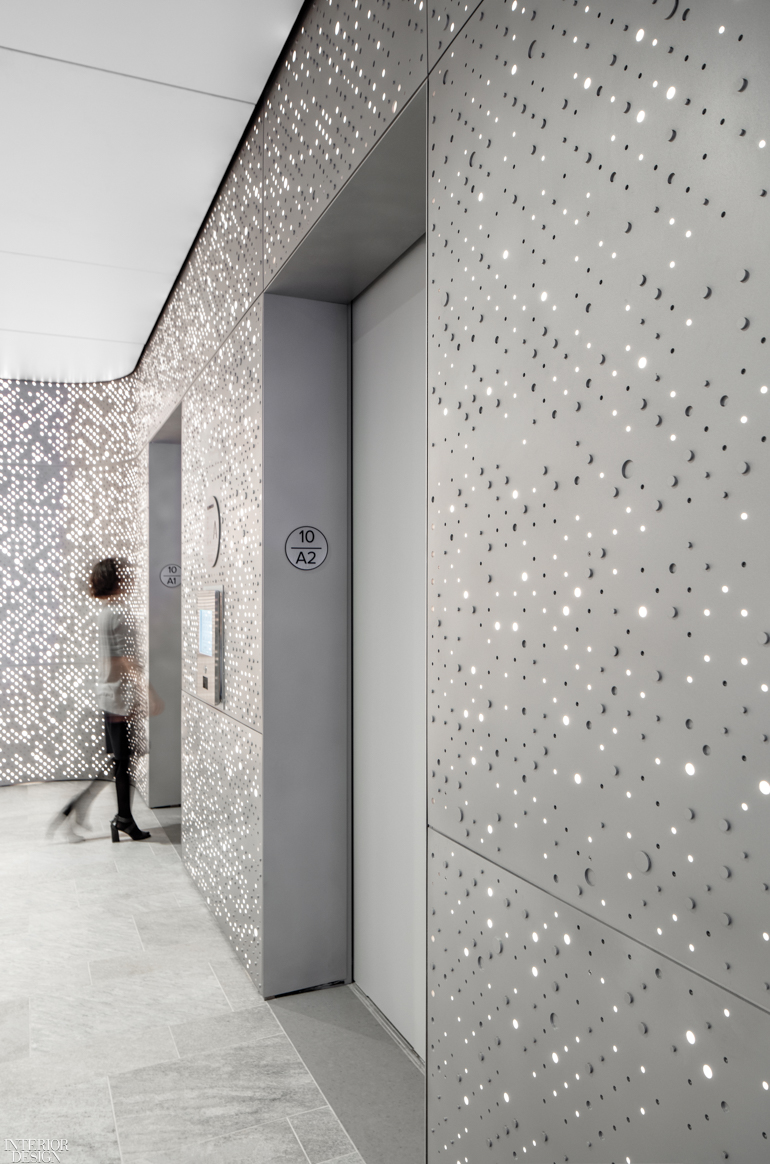 Mergers are a driving principle in American business. In 2016, the owner of a financial-services firm with separate divisions in two different New York buildings wanted to make them feel like a single company. Each group had outgrown its offices, so he hired Architecture + Information, the firm founded by Interior Design Hall of Fame members Brad Zizmor and Dag Folger, to consolidate them under one roof. A cool feature: Panels of perforated bead-blasted aluminum, backlit by LED paper, surround the elevator lobby. Read more about this project

Lugging one’s dirty laundry to the dry cleaners isn’t exactly as glamorous as a visit to a chic Parisian pied-à-terre—but why shouldn’t it be? For Les Nettoyeurs White’s first flagship, a construction just a few years old in a residential neighborhood on the south shore of Montreal, IvyStudio took inspiration from classic French apartments. Read more about this project

If Coolhaven—the name of a waterfront district in Rotterdam, the Netherlands—suggests an oasis of cutting-edge chic, a tour of designer Sabine Marcelis’s elegantly restrained neighborhood loft only reinforces the impression. But the Dutch moniker translates to Coal Harbor, which gives a truer sense of the area’s character: “It used to be quite rough but has changed massively in the three years since we moved here,” Marcelis says. Even so, her 2,800-square-foot apartment, housed on the second floor of a four-story building, overlooks the heavily trafficked Schie river. The cool quotient is mostly inside. Read more about this project

These days, workplaces often contain cafés, wellness rooms, and lounges galore. But a bar? Not as likely... let alone four of them. But such is the case at the North American headquarters of the Campari Group—the Milan-based company famous for its bright-red namesake aperitif—that now also counts more than 50 other beverage brands in its portfolio. Mix them all together, and it makes Campari Group the sixth largest spirits company in the world—a feat worthy of celebrating. Gensler helped the group do so with its new two-story New York office. Read more about this project

“How do we make a physical store relevant?” That’s what the team at Ministry of Design asked themselves, says founder and director Colin Seah, when they got the chance to design a Durasport sporting goods flagship in a new mall in Safdie Architect’s Jewel Changi Airport in Singapore. Their answer? Make the space an experience, make furnishings as high-performance as the products themselves, and—like any good athlete—ensure flexibility. Read more about this project 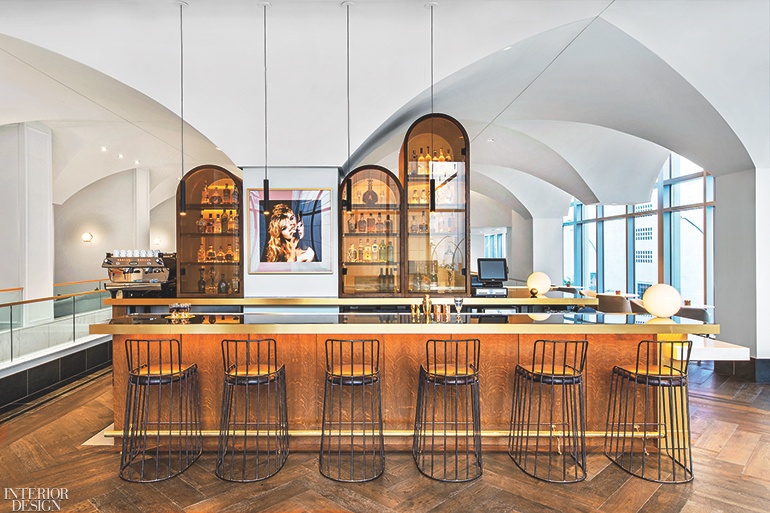 Rottet Studio has designed hotels all over: New York, Chicago, Miami Beach, Las Vegas, and Bogotá, Colombia, plus the Viking Star cruise ship. But none in Houston, where Lauren Rottet’s roots run deep—her firm has been headquartered there for more than a decade. None, that is, until now. Hotel Alessandra, a 21-story ground-up property done in collaboration with Gensler, is the Interior Design Hall of Fame member’s hospitality debut in the city. Read more about this project 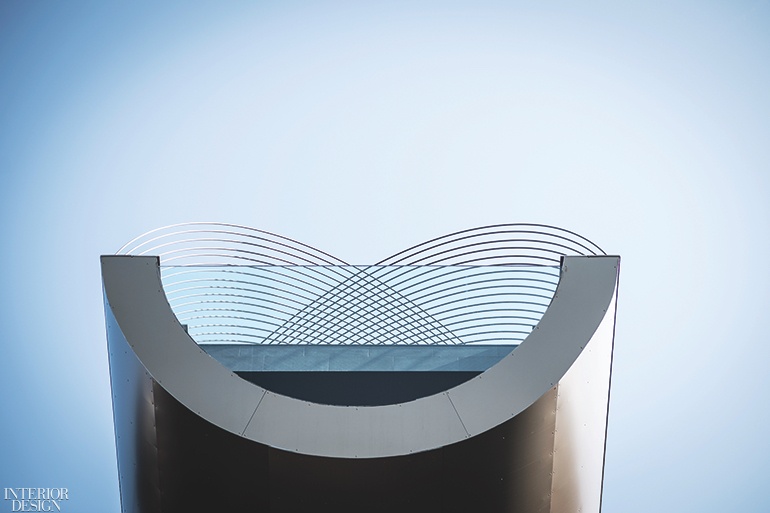 For centuries, residents of the northern Italian city of Bolzano have sought refuge from the summer heat by retreating to the Dolomites. The construction of a cog railway in 1907 gave ready access to the nearby Alpine village of Soprabolzano, where members of Bolzano’s upper crust established warm-weather estates. In their gardens they built gloriettes, small guest houses. That arcaded belvedere, along with its local descendants and the villas they serve, many in the art nouveau style, informed the design of Gloriette Guesthouse, a new 25-room boutique hotel by NOA* Network of Architecture that reinterprets Soprabolzano’s leisured past for the 21st century—complete with a bronze-paneled rooftop infinity pool that cantilevers 7 feet from the mansard roof. Read more about this project