It's about to time to settle into winter. A fireplace calls back to a simpler, rustic time without electricity, gas, or any object belonging to the "smart" category. Whether in restorations or new builds, these 20 fireplaces feel at home in residential and hospitality projects. 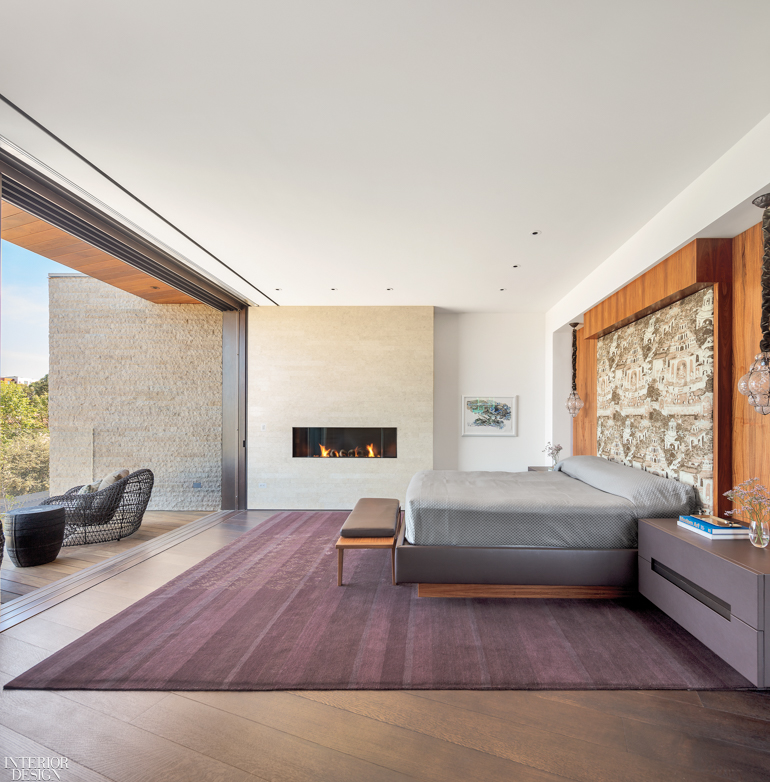 The Pacific Palisades holds no shortage of contemporary houses. Stunning, some. Large, many. This collaboration between Magni Kalman Design and Shubin Donaldson is decidedly both. What makes the property a standout, for starters, is its views of a state park on one side and the Pacific Ocean opposite. The master suite, at 2,000 square feet, is the size of a generous apartment—but its fireplace adds an element of coziness. Read more about this project 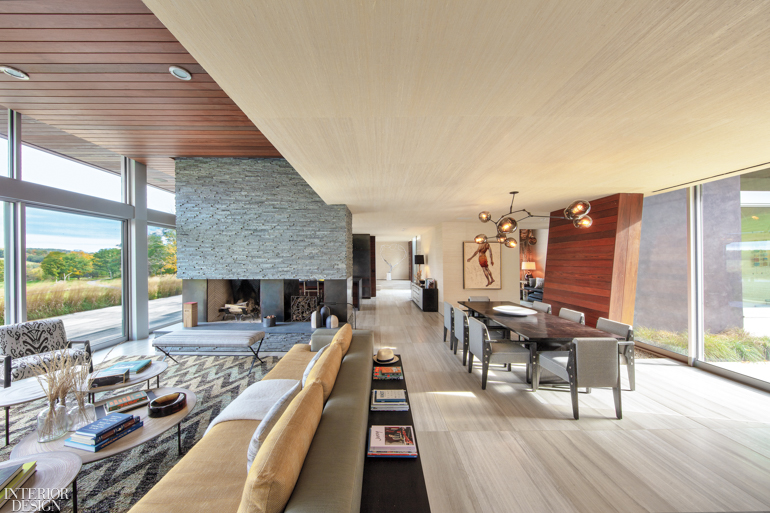 In a world gone digital, we’re all staring at screens. But when sister architects Gisue and Mojgan Hariri set out to design a country house in the Hudson Valley, three hours north of New York City, they thought analog, even though their client makes his living in IT and wanted a smart house he could manage by pushing buttons back in Manhattan. A mix of custom and vintage furniture gathers on the living area’s hand-knotted hemp-and-jute rug in front of the slate-tiled fireplace, while distinctive surfaces in the dining area include marble flooring, Brazilian walnut siding on an angled wall, and woven grass cloth on some other walls and part of the ceiling. Read more about this project

3. Laura Bohn and Carol Kurth Team Up to Create House with a Tango Studio for Dance-Crazy Clients 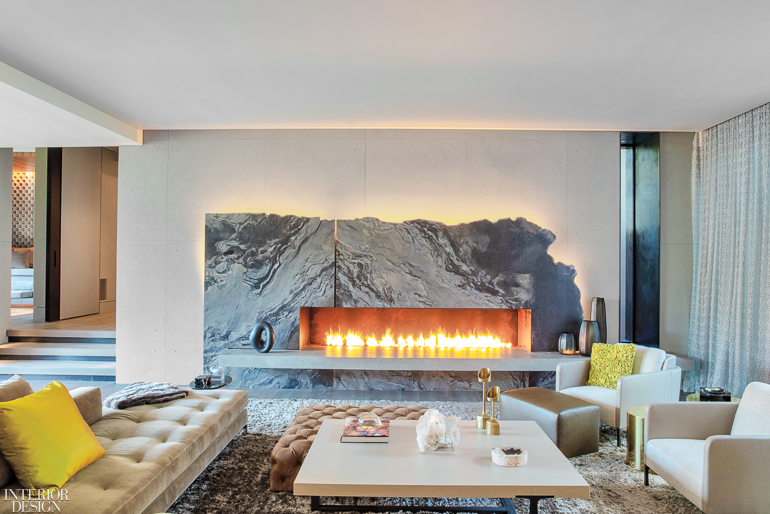 The Connecticut house Carol Kurth conceived is a modern assemblage of interlocking volumes that plays openness against privacy. The primary cladding materials are zinc panels, stucco, and white ash treated thermally, which adds to the wood’s moisture resistance. Ecological responsibility was a consideration in many decisions made for the home, which features geothermal heating and a rooftop solar array. The gas fireplace in the living area is surrounded by slabs of textured Brazilian quartzite with hand-chiseled edges. Read more about this project

4. No.12 Fashions Women Professionals a Room of Their Own in London 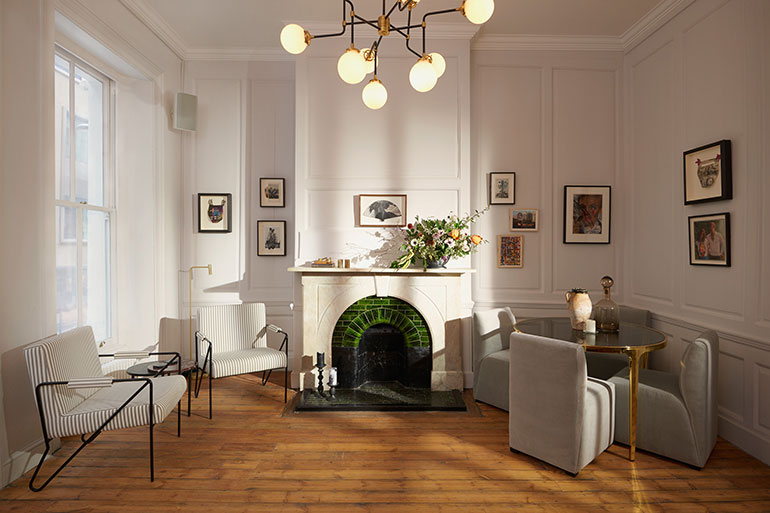 It’s impossible to envision an all-women’s space without harking back to the seemingly immortal words of Virginia Woolf: “A woman must have money and a room of her own.” Recently, for Katie Earl and Emma Rayner of East London–based architecture and design studio No.12, it was time to make this “room”—actually, make that rooms—a reality. The AllBright, which opened on International Women’s Day this year, is an all-women’s private club geared towards networking and professional development. Read more about this project

5. Studio Aisslinger Samples From Around the World for a Zurich Hotel 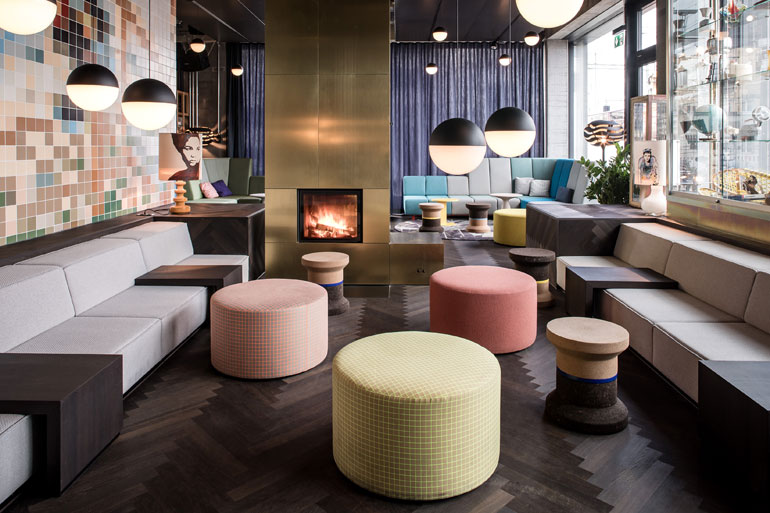 The city’s former red-light district, Zurich’s Langstrasse neighborhood is varied, bridging a commercial quarter with a young, artsy scene. It is fitting then that the design of a new hotel within it, the 70,000-square-foot 25hours Hotel Zürich Langstrasse, would be a melting pot of influences and draw from multiple cultural sources. Read more about this project

6. A Sense of Calm Reigns at a California Country Retreat by Pfau Long Architecture 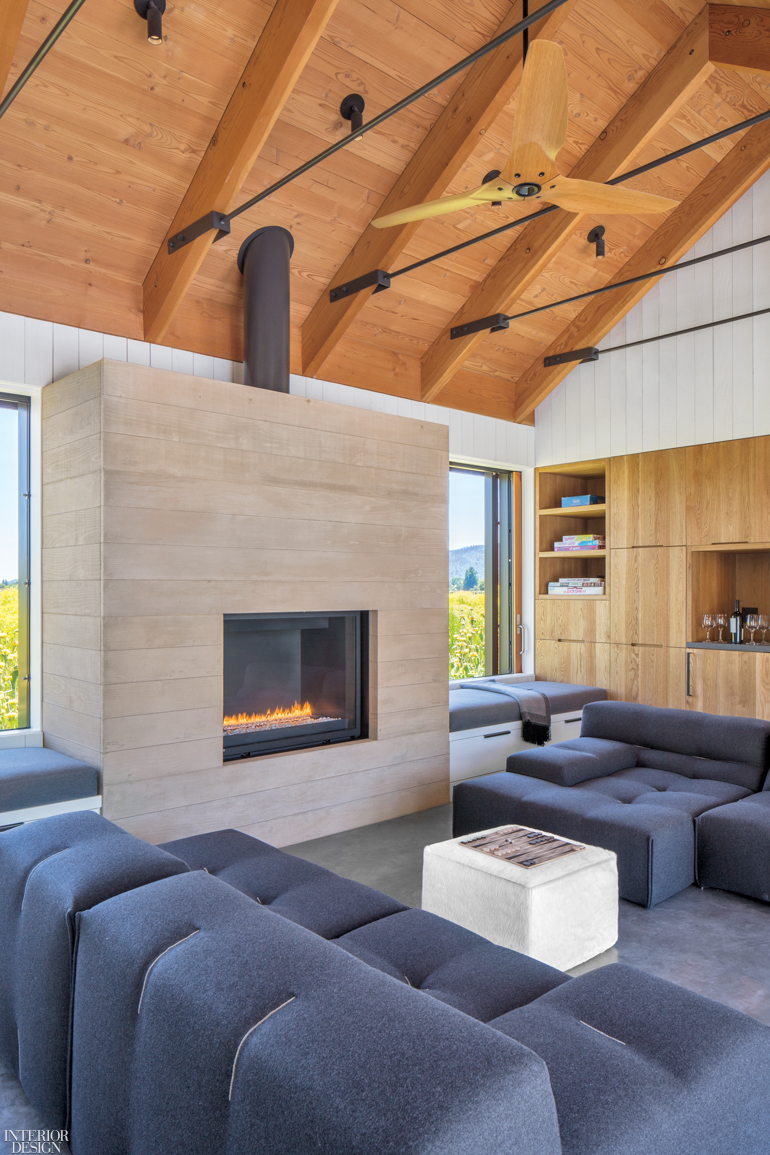 Despite the endless flow of thirsty tourists to its fancy wineries and gentrified towns, California’s Napa Valley remains first and forever an agricultural region. That heritage is aptly honored by a new residential compound planted amid the vineyards and designed by Pfau Long Architecture. In the pool house, Patricia Urquiola sectional sofas flank the board-formed concrete fireplace. Read more about this project 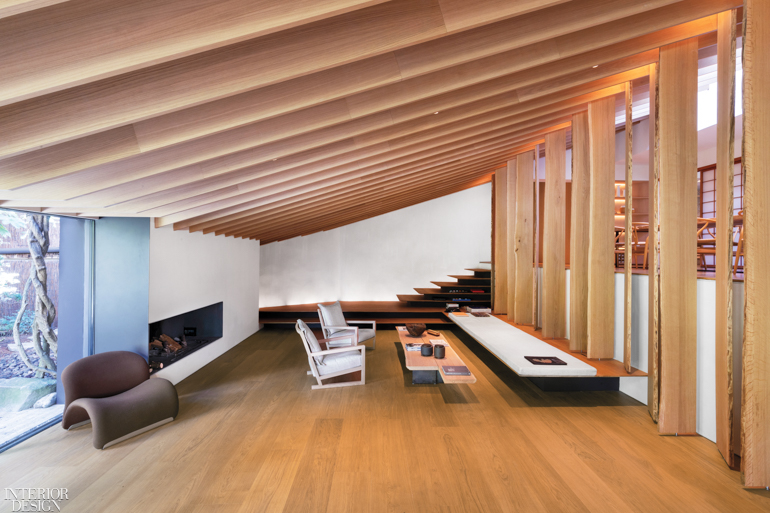 Tucked away in a hidden spot in the Bastille district of Paris is a remarkable house built by Japanese fashion designer Kenzo Takada more than thirty years ago. Set in the courtyard of an 18th-century apartment building, the four-level, 14,000-square foot, cedar-clad residence—replete with its own inner courtyard and planted terraces—took about seven years to complete. When a French family recently acquired the house, they called on the Japanese architect and Interior Design Hall of Fame member Kengo Kuma to infuse new life into the unique property. Read more about this project 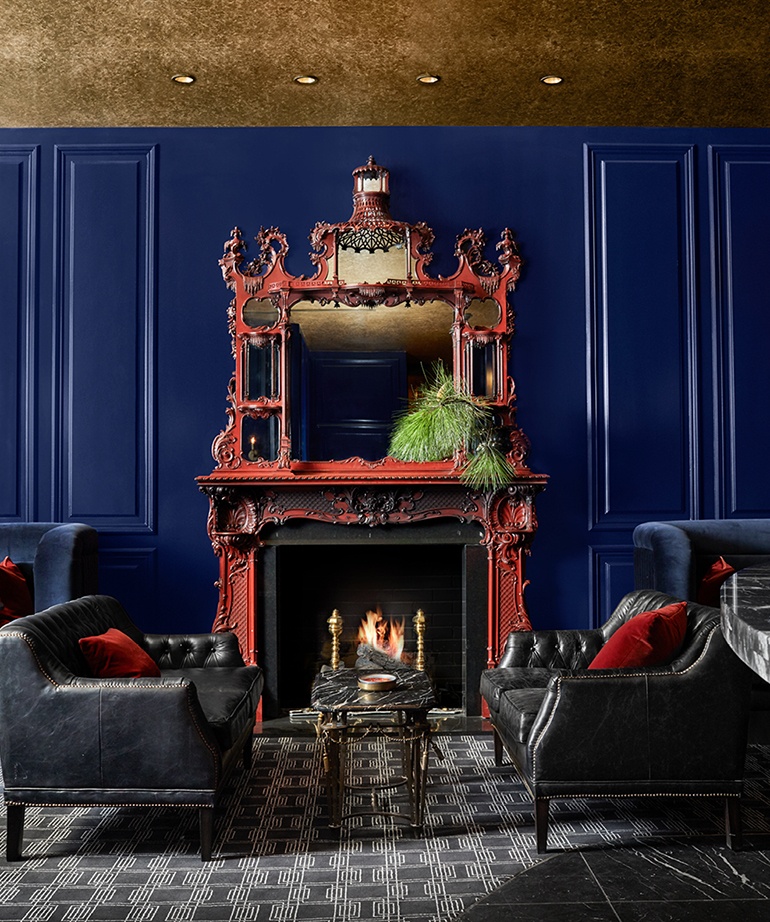 The idea was to restore the former glories of The Adolphus Hotel, but with some restraint. Swoon, the Studio’s founder Samantha Sano and partner Joslyn Taylor employed a Francophile color palette, all butter yellow and deep blues and dark wood, across walls and upholstery for unfussy furnishings. Benjamin Moore’s Deep Royal paint sets off the original fireplace, with Schoolhouse Electric sofas and Crossley Axminster rug. Read more about this project 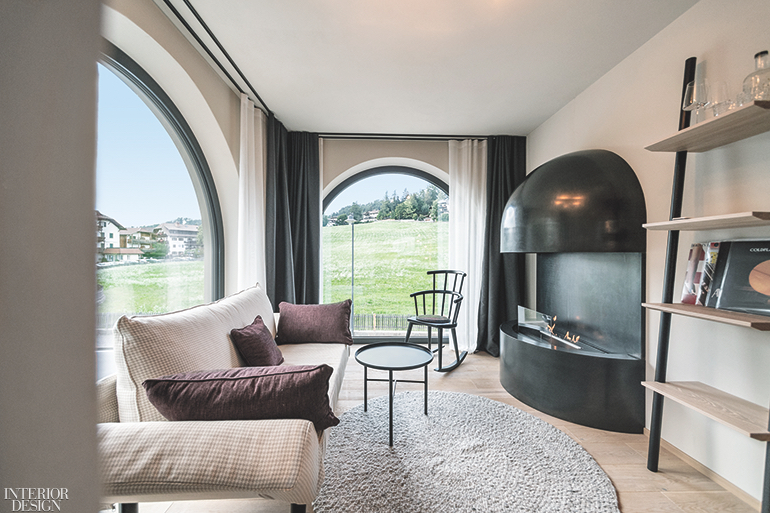 The estates of the Alpine village of Soprabolzano informed the design of Gloriette Guesthouse, a new 25-room boutique hotel by NOA* Network of Architecture that reinterprets Soprabolzano’s leisured past for the 21st century. Each suite’s lounge area is furnished with comfortable sofas, adding to the sense of warmth and welcome; one, appropriately named the Chimney suite, has an enormous blackened-steel fireplace. Read more about this project 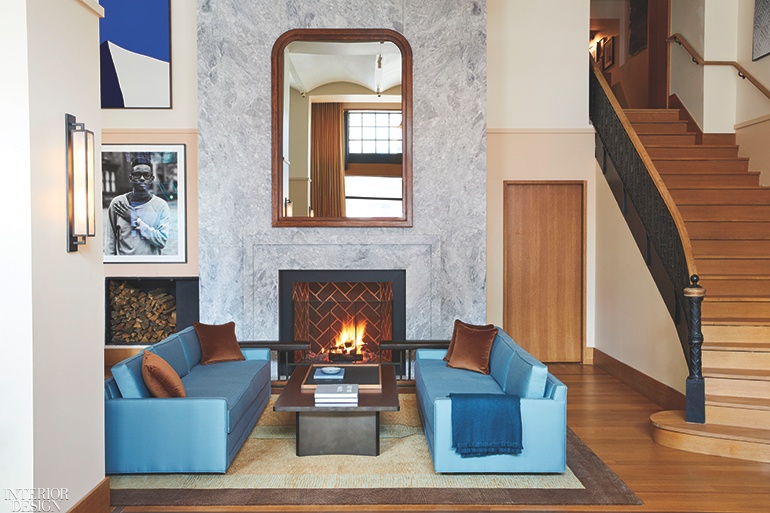 A former department store houses the lobby of this newly opened Detroit hotel by Gachot Studios. The staircase’s iron balustrade dates to 1925 but the wood-burning fireplace and Italian marble mantel are newly added. Artworks are mostly by Michigan-based artists, curated by Library Street Collective, a local gallery. Read more about this project 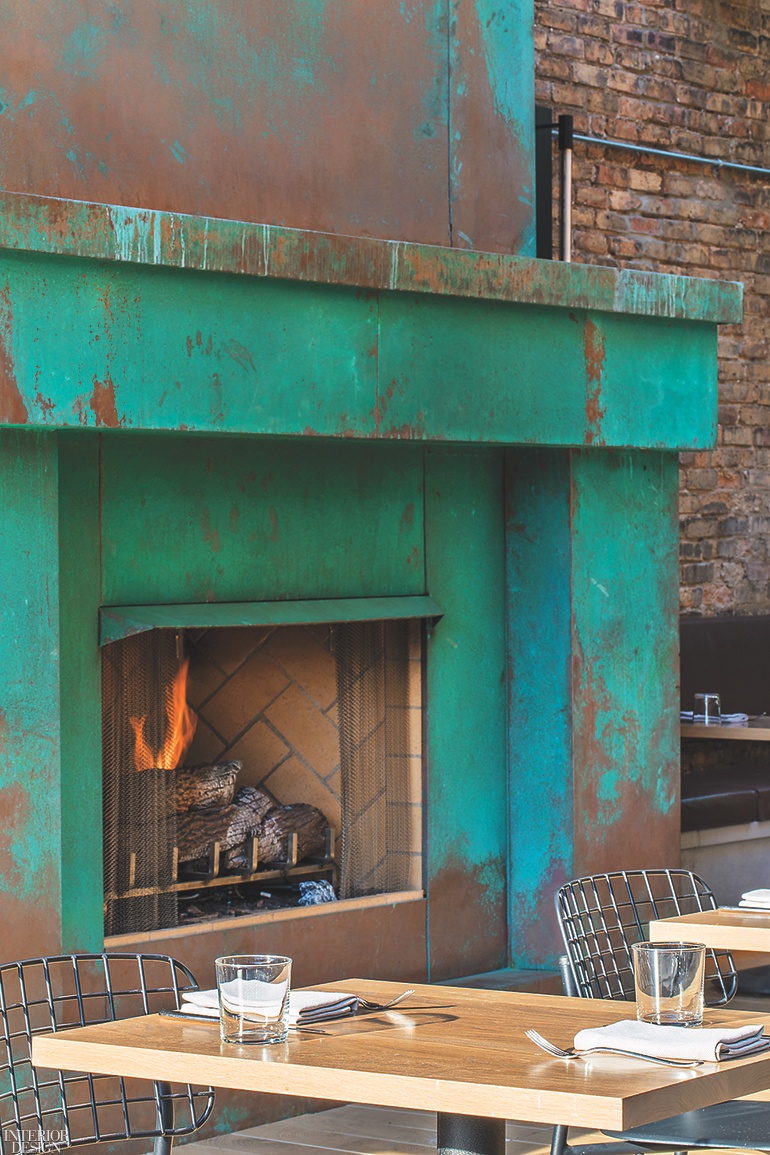 Inspired in part by Chicago’s motto, Urbs en Horto, meaning city in a garden, Gensler left space for an intimate courtyard between the street-front sections of the two buildings of Tied House. Inviting people to gather, a massive copper outdoor fireplace is already starting to patina. Like the copper cornices next door, the fireplace will just get more beautiful over time. Read more about this project 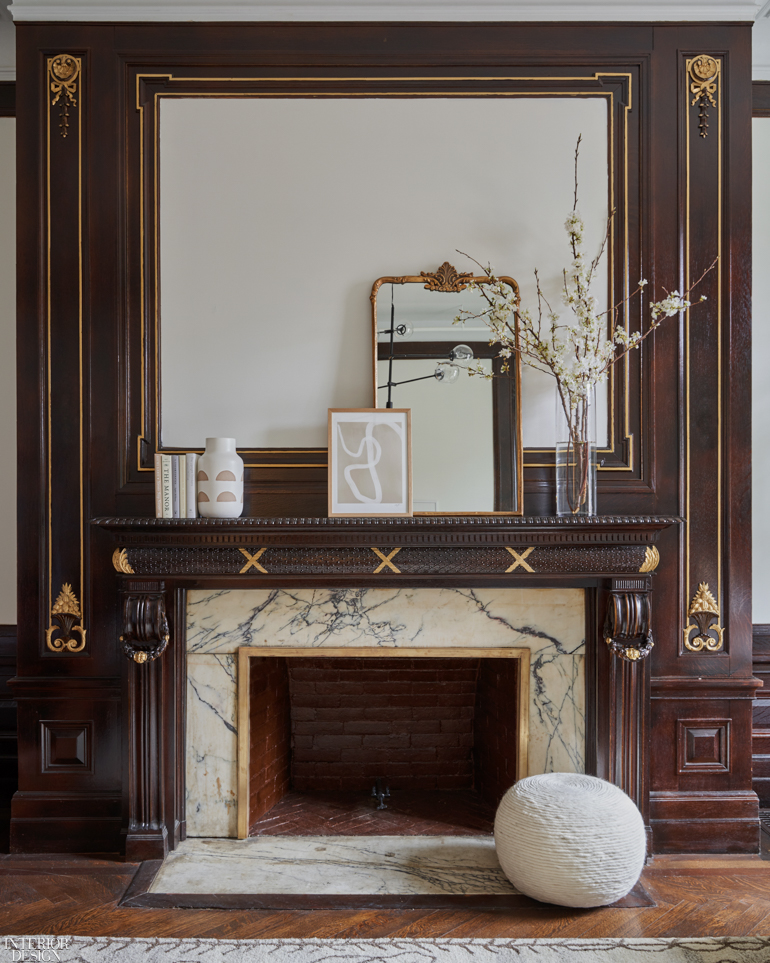 A 6,200-square-foot row house on Grand Street in Clinton Hill, Brooklyn is the newest of Common’s coliving spaces. Built in 1901, Common restored the five-floor home to function for 23 people. Rather than keeping with the two-family tradition, Common densified the historic mansion in order to make the most of the much-desired square footage that Brooklyn has to offer. Read more about this project 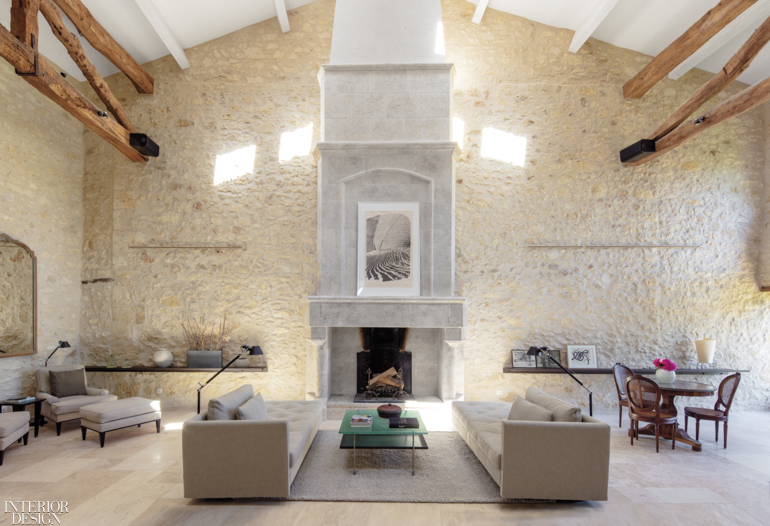 Interior Design Hall of Fame member and NBBJ consulting partner Rysia Suchecka and her husband reinvented a centuries-old farm in Larroque-Saint-Sernan, France. A former barn, one of three on the property, was converted into a salon used for entertaining and for hosting concerts. A Krzysztof Krzywoblodzki artwork sits on the fireplace mantle. Read more about this project

14. Humbert & Poyet Combine Rough and Refined for the Interior of a Swiss Ski Chalet 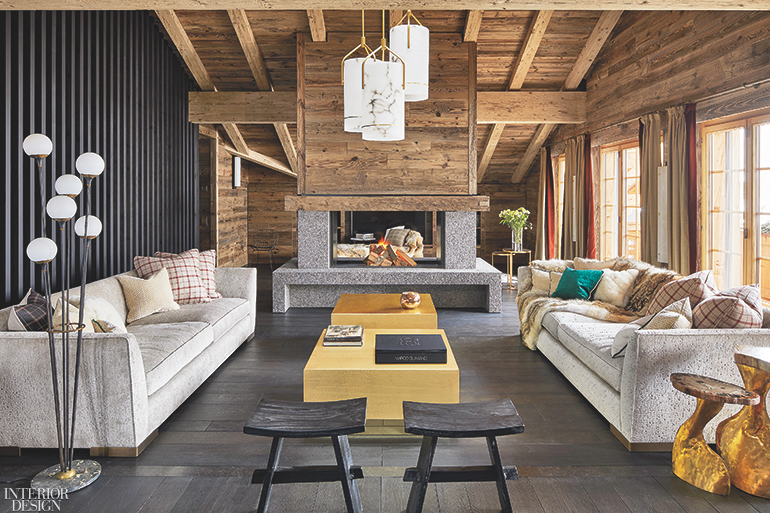 Humbert & Poyet have designed ground-up houses but prefer focusing on interiors, often entering projects when the shell is done but the inside is still raw. Although their commercial projects tilt toward the glamorous, Humbert and Poyet love combining the rough with the refined in their residences. That contrast can be seen in a three-story ski chalet in the Swiss Alps. The living area gathers sofas covered in cotton and brass cocktail tables, all custom, before a Belgian limestone fireplace. Read more about this project 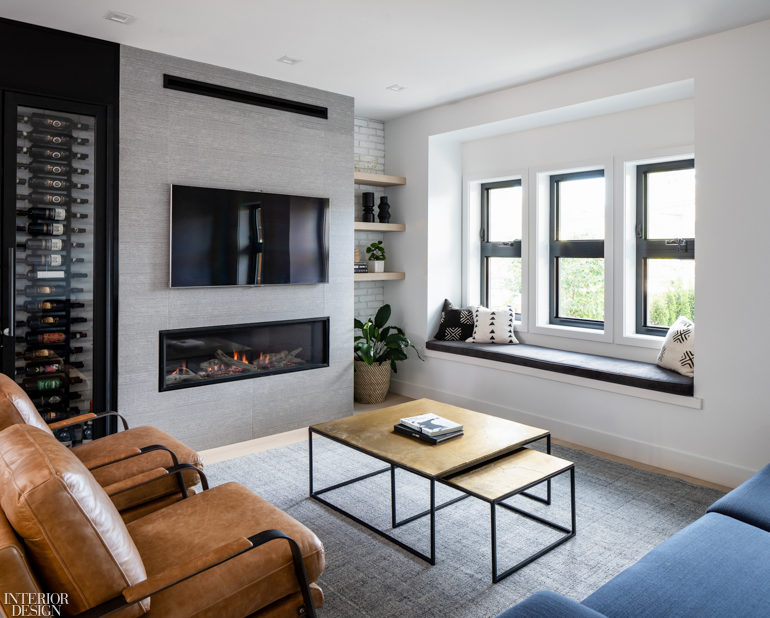 When a young couple in Vancouver approached local firm Moor Design to make their new three-level, four-bedroom, 4.5-bath Craftsman house a home, they had a few guidelines. With two children under the age of three, they needed the space to be family-friendly but still stylish enough to entertain. They liked New York lofts and Scandinavian minimalism. For a perfect blend of hot and cold, they successfully managed to vent the fireplace—so it didn’t overheat the temperature-controlled wine storage right next store—making entertaining effortless. Read more about this project

The design of Jackson Park is richly varied, with materials that are durable and low-maintenance, such as vinyl, rubber and indoor-outdoor upholstery fabric. That’s particularly evident by the indoor pool. Design director Nancie Min originally specified a gas fireplace to overlook it—after all, how can you have water without fire? But when that feature proved too expensive, Clodagh Design came back to the developer with a less-expensive water-vapor version. Read more about this project 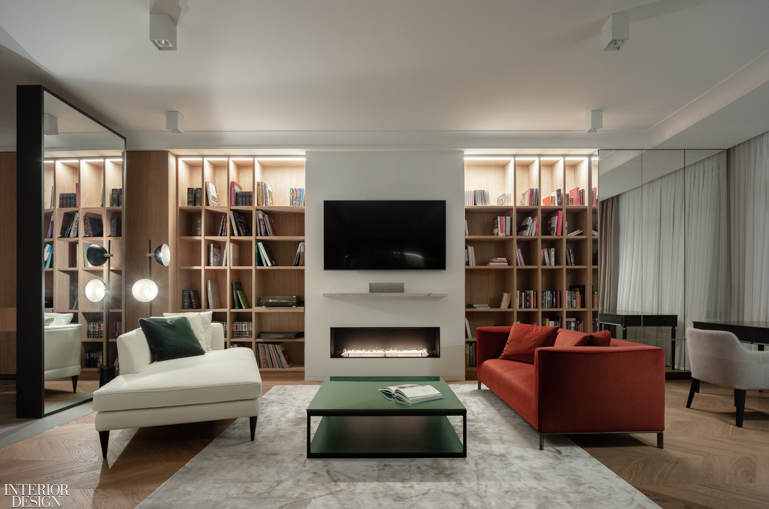 The Ukraine-based firm Balbek Bureau has designed hospitality, office, and residential spaces from Qingdao to London to San Francisco, but when a young businesswoman in its home city of Kyiv asked them to turn her 1,600-square-foot apartment into a home, the project was a little more personal. In the living room, a Molteni & C sofa, custom Stalkon coffee table, and custom armchair gather near the Planika fireplace. Read more about this project 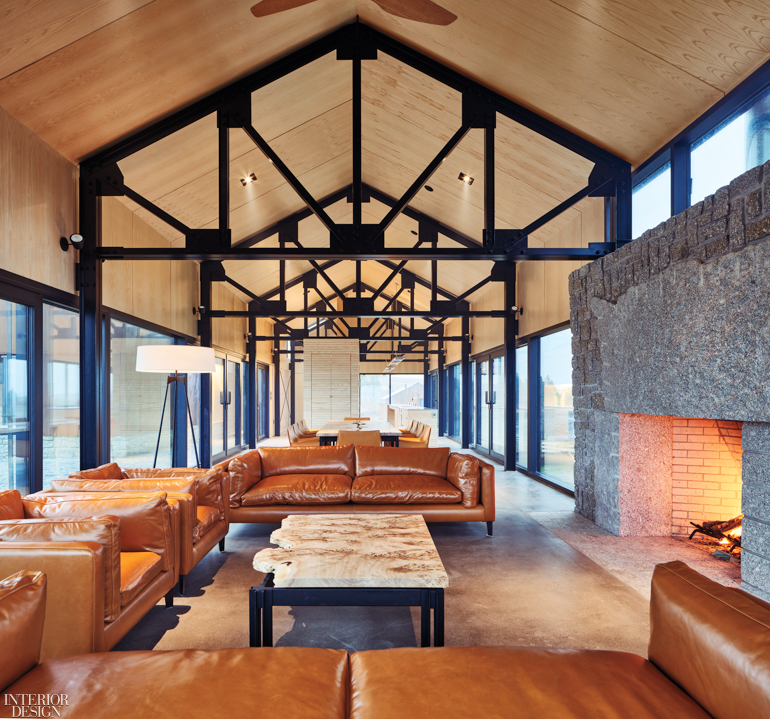 In an agrarian Nova Scotia landscape, a trio of gabled structures echoing local vernacular buildings are made modern through their Corten cladding, sleek fenestration, and minimalist detailing. Two of the volumes—the living pod and the sleeping quarters—are anchored by a plinth of granite, the same stone that comprises the lounge’s mammoth fireplace with five-ton live-edge mantle. Read more about this project 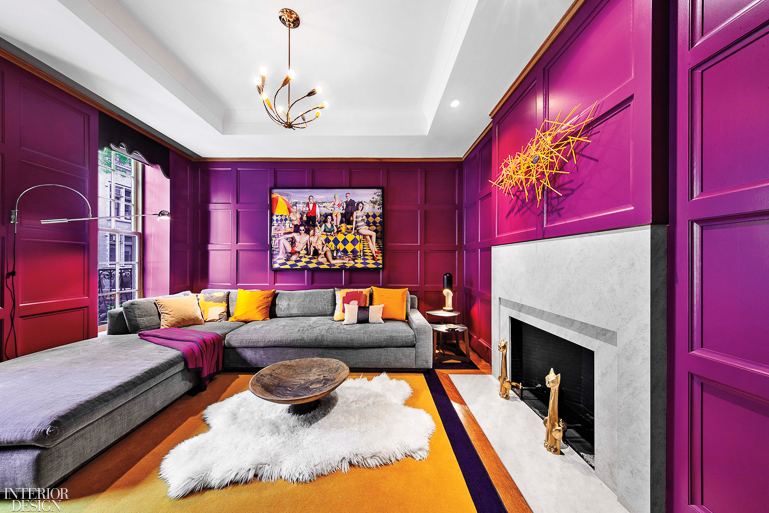 From the outside, historic town houses seem like enviable places to live. But their inhabitants admit that there are drawbacks: Deep lots create dark interiors, bottom floors receive little natural light, and ceilings are often low. Such was the case at a Federal-style town house in New York’s West Village. The project developer hired Peter Pelsinski and Karen Stonely, principals of SPAN Architecture, to convert the 1820s building from apartments into a single-family home. Lou Blass’s steel-rod sculpture hangs above a Lecce stone fireplace in the den, illuminated by a midcentury Pierre Guariche chandelier. Read more about this project 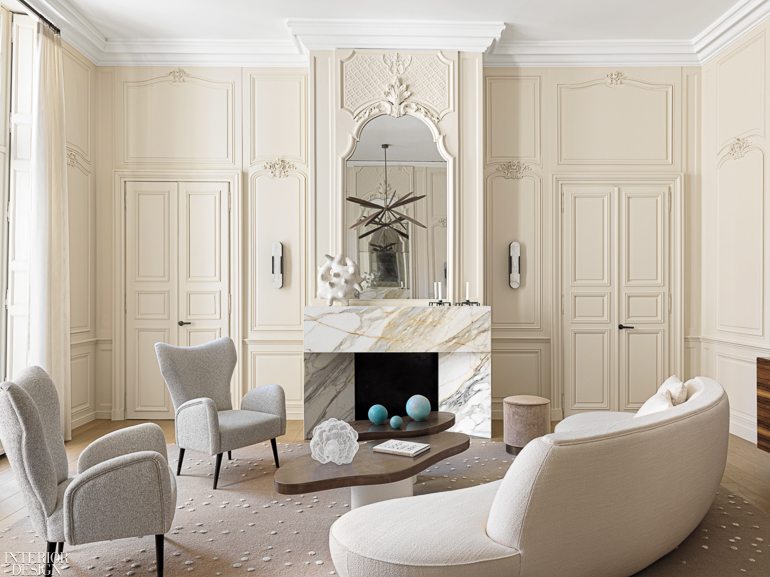 For French interior designer Damien Langlois-Meurinne, principal of Agence DL-M, the notion of living on Paris’s Île Saint-Louis represents a sort of dream. Langlois-Meurinne’s first visit to this grand 2,658-square-foot Île Saint-Louis apartment, which he revamped for a sixtysomething French couple, was appropriately bewitching. It was on a winter morning after an episode of snow. “Everything was completely white, and the silence was compelling,” he recalls. “I had the impression I was entering a country château. It was like being transported elsewhere.” In the living room, a ceramic sculpture by William Coggin sits on the custom Calacatta Oro marble fireplace flanked by Kelly Wearstler’s bronze and alabaster Melange sconces. Read more about this project