Restaurant design continues on an audacious path as chefs and designers collaborate on spaces that are as equally apt to stimulate the eye as they are the appetite. From fine-dining experiences by Michelin-starred chefs to casual spots serving Asian noodles or brunch, here are the best restaurant projects of 2019 featured in Interior Design. One was a Best of Year Awards honoree; check the complete list of BoY winners and honorees for additional casual and fine dining projects that we loved.

After shopping at Neiman Marcus in New York City's Hudson Yards, visitors can also eat there in style, immersed in a shapely environment of rounded apertures, circular screens of laser-cut brass, and an oval coffered ceiling at Zodiac Room. The design won a 2019 Best of Year honoree award for Fine Dining. Read more about this project

Alain Ducasse at Morpheus in Macau by Jouin Manku

The south corridor of the dining floor at Morpheus hotel in Macau curves around to the formal Alain Ducasse at Morpheus, featuring Jouin Manku’s favored palette of neutral beiges, grays, black, and cream. “And we love glass,” Sanjit Manku states. “But the question was how to push it further. We were looking for something elegant, but not too tech.” The answer was found in a trip to Prague, purveyor of Bohemian glass, and the result is a stunning other-worldly dreamscape: a translucent forest of LED-lit blown-glass cylinders suspended from the ceiling and walls and reflected in pools of water that meander throughout. Read more about this project

Tied House in Chicago by Gensler

Schubas Tavern, a live music venue housed in a neo-Gothic landmark, is more relevant than ever, hosting sold-out shows nearly seven nights per week. The building was constructed in 1903 by the Jos. Schlitz Brewing Co. as a “tied house,” a British term for brewery-owned pubs that pushed their own beer. In fact, the orange brick facade of Schubas still features the Schlitz logo—a globe wrapped in a sash—in terra-cotta bas-relief. Schubas is now owned by the Audiotree Group, and it was Audiotree COO and co-founder Adam Thurston and president Michael Johnston who saw the potential in opening a more upscale sister restaurant for Schubas. So Audiotree bought and demolished the diner and parking lot next door, then hired Gensler to build on the site. The result was Tied House. Read more about this project

The Y in Moscow by Asthetique

Millennials aren’t just about avocado toast, although the distinctive green, often mixed with peach, is a clear menu favorite around the world. The Y—a new 6,000-square-foot eatery in Moscow featuring a first floor with two open kitchens and 200 seats divided between a casual dining area and coffee shop and formal areas up above—is a textbook example of that generation’s preferred flavor. “We took inspiration from how the ‘70s vibe touched on this generation,” a look that’s prevalent throughout the city's up-and-coming Hamovniki neighborhood, says designer Alina Pimkina of New York City-based Asthetíque, who headed up the project with partner Julien Albertini. Read more about this project

Audrey at the Hammer in Los Angeles by Michael Maltzan, Fettle Design, and Jorge Pardo 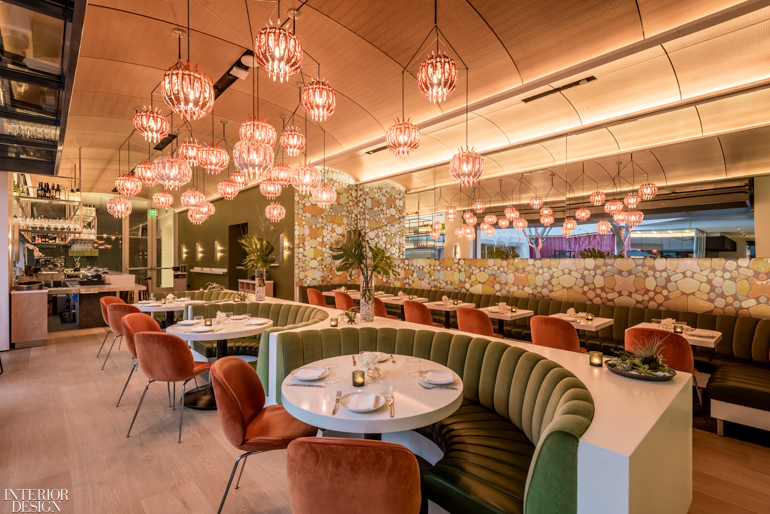 Like a lot of New Yorkers, restaurateur Soa Davies Forrest and chef Lisa Giffen have headed toward the enticing sunsets and glamorous settings of Los Angeles—in this case, for Audrey at the Hammer, located on the ground floor and patio of the Hammer Museum as part of the institution’s renovation and expansion overseen by Michael Maltzan Architecture. LA- and London-based Fettle Design worked with Maltzan on the vivid 3,000-square-foot, 115-seat space. “It takes inspiration from the clean lines and renowned installations of the museum itself,” says Fettle’s director and co-founder Tom Parker. Read more about this project

Kevin Lim missed laksa, the spicy soup he slurped as a child when visiting relatives in Kuala Lumpur, Malaysia. “It was my comfort food,” recalls Lim, who is an architect as well as a trained chef—he attended Le Cordon Bleu, the now-closed culinary school near Boston, after attaining his architecture degree. Now back in Hong Kong, he’s the co-founding partner of OpenUU with his wife, design director Caroline Chou. The soup and other Southeast Asian dishes conceived by Lim have debuted at their first restaurant, Mean Noodles, the winner of the Will Ching Award for a project by a firm with five or fewer employees. Read more about this project

Voyages at Morpheus in Macau by Jouin Manku

The two restaurants in the Morpheus hotel share the main fourth-floor elevator landing and reception area, a luxurious floor-to-ceiling, wall-to-wall expanse of burnished walnut. A curving corridor to the north leads to Voyages by Alain Ducasse, its entrance anchored by a massive circular bar of heavily veined marble with a glittering armada of backlit bottles arrayed on stainless-steel shelves. “It’s like a central chandelier cage, but sitting on the floor,” Patrick Jouin says. “It provides a stage setting for the barman.” Read more about this project

Adaptive reuse transformed this former clothing store—built in a stolid neoclassicism known in Kiev, Ukraine, as “Stalin Empire”—into a stage set for Nam Modern Vietnamese Cuisine, a 6,000-square-foot restaurant by Yod Design Lab. Traveling to Southeast Asia for research, creative designer Dmytro Bonesko became familiar with the region’s French colonial style. To replicate that sultry feeling, he had the restaurant’s natural materials aged artificially, “as if Vietnam’s extremely humid climate had made its mark,” Bonesko says. Read more about this project

London is no stranger to luxury (or eccentricity), but one of the newest arrivals on the city’s hospitality scene has still managed to create quite the buzz. Bob Bob Cité, an upscale brasserie suspended almost 100 feet above the atrium of Rogers Stark Harbour + Partners’ Leadenhall Building, is the latest venture from Leonid Shutov, best known for his beloved Bob Bob Ricard in Soho. With interiors courtesy of Shayne Brady, who co-founded London-based BradyWilliams with Emily Williams, the restaurant is part cruise ship casino, part retro-futuristic diner, and utterly out of this world. Read more about this project 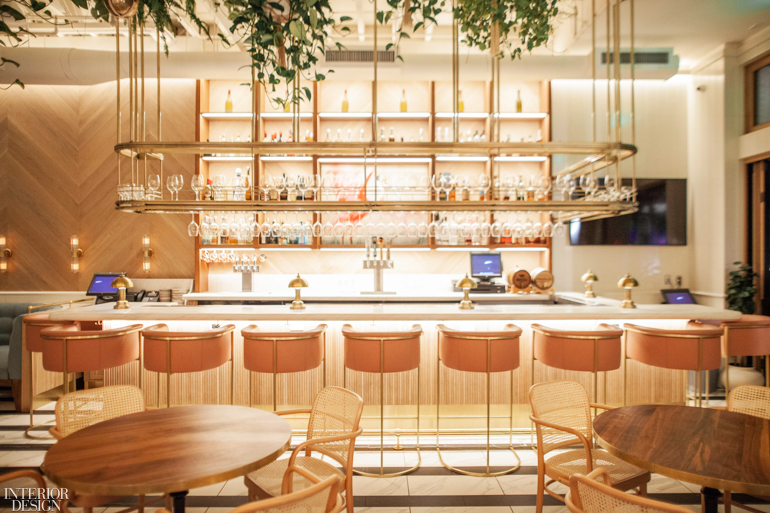 Melding influences that include a West Coast marina, an English tea house, and a Parisian brasserie might sound complicated, but for Sophie Goineau, it was a breeze. Her interiors for Porta Via Palisades—a bistro tucked into Palisades Village, Rick Caruso’s multi-use village concept between Malibu and Santa Monica—effortlessly integrate Ralph Lauren sconces that look like fishing poles, delicate cane and greenery, and classic French touches such as the black-and-white marble floors. Read more about this project 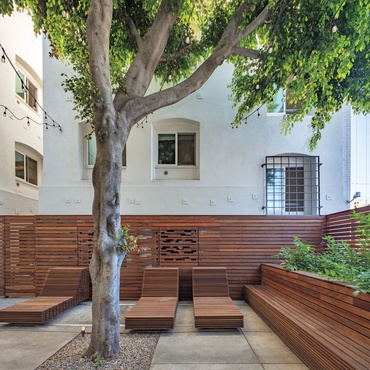 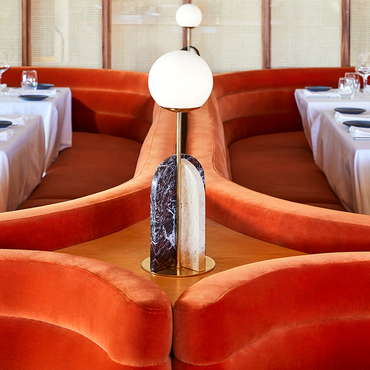 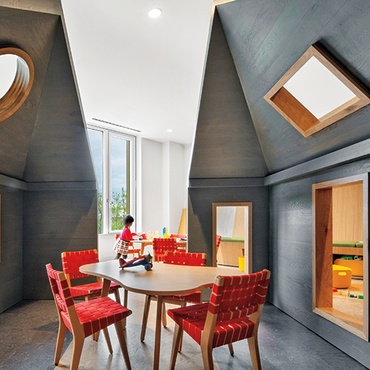