Most Creative Office Projects of 2019

Office design provided some of the most surprisingly cool projects of the past year as traditionally sedate corporate workplaces transitioned to dramatic social hubs designed with the wants and needs of employees in mind. Here are the most creative office projects of 2019—three of which won Best of Year awards and five of which were honorees. 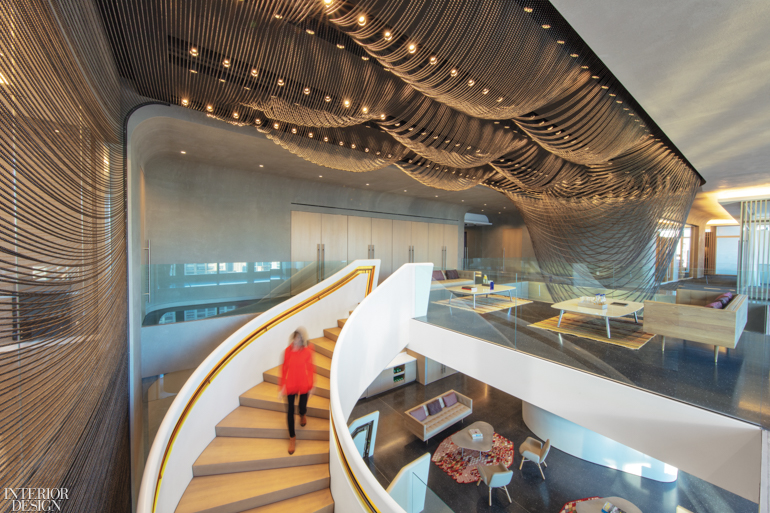 A modernist architect might begin a design with a concept, simple enough to draw on a restaurant napkin. A structuralist might import a typology, everything understood in advance. A text-driven architect might initiate a project with a theory. But for Aaron Schiller, principal of the integrated architecture, design, branding, and strategy consultancy, Schiller Projects, the process always starts with data. Asked to design the New York headquarters for Boies Schiller Flexner, a high-profile international law practice relocating from Midtown to Hudson Yards, the first thing Schiller and his team did was to descend on the firm’s existing offices and, like sociologists with iPads and notebooks in hand, observe work patterns, chart logistics, conduct interviews, and weigh expectations. The result speaks for itself—and won the 2019 Best of Year Award for Medium Corporate Office.  Read more about this project

These days, workplaces often contain cafés, wellness rooms, and lounges galore. But a bar? Not as likely... let alone four of them. But such is the case at the North American headquarters of the Campari Group—the Milan-based company famous for its bright-red namesake aperitif—that now also counts more than 50 other beverage brands in its portfolio. Mix them all together, and it makes Campari Group the sixth largest spirits company in the world—a feat worthy of celebrating. Gensler helped the group do so with its new two-story New York office and won the 2019 Best of Year Award for Corporate Cafeteria/Bar. Read more about this project

“We truly cross the divide,” Calvin Tsao begins, meaning: “We’re equally comfortable with architecture and interior design.” So naturally Tsao & McKown was among the talented mix-masters that members of the Gant family wanted to meet when they were planning headquarters in Burlington, North Carolina, for their growing Sunbrella brand. The Gants had their eye on converting the early 20th-century former mill they owned. “We had the aha moment, literally, in looking at our birthplace,” Glen Raven chairman Allen Gant Jr. says. “So we weren’t looking for an architect who could design us the most beautiful building—we felt we already had that. But instead for someone who could understand the functionality of the business.” The result earned Tsao & McKown a 2019 Best of Year Award for Manufacturer Headquarters. Read more about this project

It was inevitable. Google, which we like to call the first stop for everything, would one day expand its presence in Los Angeles. When that time came, not just any venue would do. The company alit at the hangar built in 1943 to house Hughes Aircraft Company’s Spruce Goose. Google and ZGF Architects had already worked together on six projects, but this would be the largest effort that either had ever undertaken in the realm of adaptive reuse. “The outcome was unknown when we embarked on the project,” Google project executive R.G. Kahoe says. “But we knew we could do something amazing, a moon-shot idea, as well as being the correct stewards for the building.” The project was a Best of Year honoree in the Office Transformation category. Read more about this project

Some of the edgiest programs to hit the airwaves come from Showtime: Dexter, Homeland, Ray Donovan, Billions. The list goes on. You’d never have guessed, however, from visiting the Los Angeles office. The space was unremarkable at best. Relocation offered the opportunity to create “an environment that was warm and welcoming, cool without being trendy,” says Showtime Networks president of entertainment Jana Winograde. For that, kudos go to CannonDesign where Principal Chari Jalali led the project from L.A., while design principal Robert Benson commuted from Chicago. And the project earned Best of Year honoree status for Creative Office.  Read more about this project

Yes, they of the singing telegram and the currency transfer. Western Union has an illustrious heritage of innovation starting in 1851. Fast-forward to the present to discover that the company has developed a robust digital platform and established a headquarters far from upstate New York. “Its roots in the Denver area run deep,” Gensler design principal and studio director Michelle Liebling reveals—24 years, to be exact. “But people don’t know they’re here.” That has changed with a move from suburban Englewood to a high-profile Gensler-designed spec building at the Denver Technological Center, part of a 42-acre campus in the city’s burgeoning tech corridor. Western Union leased 250,000 square feet on eight of the building’s 16 floors and brought Gensler back for the interiors. Their efforts earned a 2019 Best of Year honoree award for Large Corporate Office. Read more about this project 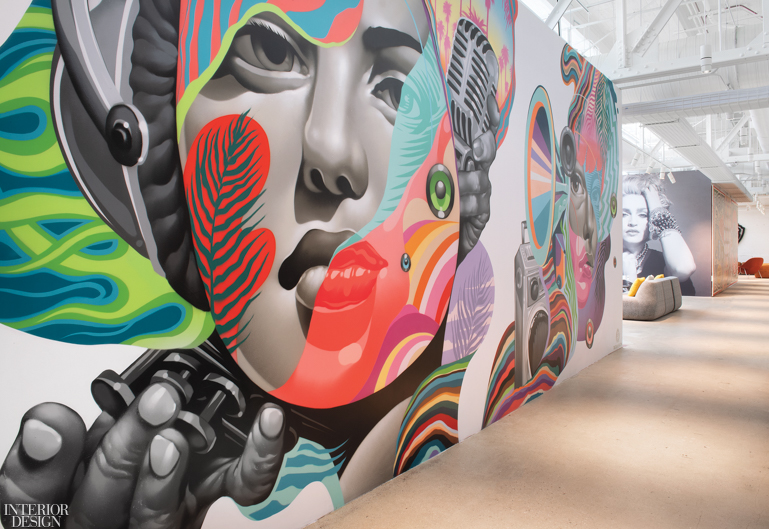 Combine an august site, a prominent entertainment company, and top-notch architecture firms, and you’re likely to have a hit. Such is the case for the West Coast headquarters of Warner Music Group in Los Angeles, which occupies the former Ford Model T factory and showroom, designed in 1914 by Parkinson and Bergstrom and recently re-imagined by Rockwell Group and Rockefeller Kempel Architects. The partnership earned a 2019 Best of Year honoree award for Creative Office.  Read more about this project

Leveling the single-story smattering of 1950s garages and factories was one option. Renovating, repurposing, and enlarging them was another. The former would provide a blank slate, the latter more of a challenge—but more character. Rapt Studio CEO and chief creative officer David Galullo, prolific designer of workplaces for such companies as Google, Twitter, and PayPal, opted to retain all but one of the six brick and concrete-block structures for the Marina Del Rey, California, campus now called MDR Truss that's home to the offices of Zefr, a project that was a 2019 Best of Year honoree for Large Tech Office. Read more about this project

When a firm designs its own studio, you might think it would be the perfect opportunity for creativity to reign—without the limitations set by demanding clients. But the reality is more complicated. Take the case of Cui Shu, who had decided to relocate his Beijing firm, Cun Design. “The project could not officially start,” Cui notes “until we shook off our identity as designers and saw ourselves as the clients.” Read more about this project

In one sense the remit was straightforward: WPP, the London-based international advertising and public relations behemoth, wished to gather the New York offices of several subsidiaries into a single location. They chose 3 World Trade Center, the 80-story tower by Pritzker Architecture Prize–winning Richard Rogers of Rogers Stirk Harbour + Partners, and HOK won the bid to design the consolidated workplace. Many factors raised the complexity of the commission, however, starting with its sheer size: 700,000 square feet (that’s more than 16 acres) on 14 floors, including a 3,000-square-foot outdoor terrace. Read more about this project