Remember the movie version of E.M. Forster’s "A Room with a View" with its honeyed images of Florence, Italy? That’s the swoonily romantic lens through which one can’t help viewing the gloriously eclectic Florentine apartment that architect Massimo Adario recently renovated for his partner—an art, design, and fashion lover, who also happens to be an architect. From its position in the ancient Oltrarno quarter, mere steps from the Arno, the 2,400-square-foot, fifth-floor flat looks across the river to some of the city’s most beloved landmarks, the Galleria degli Uffizi and the basilicas of San Miniato al Monte and Santa Croce, among them. Forster’s Lucy Honeychurch couldn’t have asked for a finer view.

Before discussing the interior makeover, Adario, principal of his namesake firm, recounts the building’s colorful history. Dating to medieval times, it was destroyed by the Germans during World War II and rebuilt in 1951. Though retaining some of the qualities of the original, the reconstructed version was not slavishly faithful to it. “The facade is an irregular fusion between contemporary elements and the character of the location,” the architect explains. Similarly, Adario’s design fuses various influences across the decades from the 1920s to the ’60s, and even the ’80s. With a curatorial eye, he juxtaposes “things that you think would not go together, but they do.” The approach, the Rome-born-and-based architect notes, is not at all Florentine; rather, it’s atemporale—outside of time.

Inside, Adario made only limited structural changes and did not alter the apartment’s L-shape layout. His biggest intervention was to transform it from “a double-corridor borghese situation separating living and service zones” to one with a single hallway linking the rooms. These comprise a small entry foyer; three bedrooms with baths; and, spanning the crook of the L, an imposing enfilade incorporating living, dining, study, and kitchen areas connected by a series of wide marble portals.

Though the spaces flow easily into one another, each has a distinctive look, bold with color and brimming with detail. As for original materials, only the marble terrazzo floor tiles in the hallway already existed. Everything else is new. In terms of palette, two materials prevail: walnut and linoleum. Linoleum, one might wonder, in such an elegant environment? “From the 1920s through the ’50s it was used in buildings as a modern material,” Adario explains, citing its application in such 20th-century masterpieces as Ludwig Mies van der Rohe’s Villa Tugendhat in Brno, the Czech Republic, and Piero Portaluppi’s Villa Necchi Campiglio in Milan, the silent co-star of "I Am Love," another swoony movie. Later, the architect notes, the material became more utilitarian, losing its figurative sheen: “I wanted to bring it back, but make it look modern.”

Ergo linoleum’s pervasive use in the apartment: as two-tone wall-to-wall “rugs” in some rooms; as a brilliant expanse of orange lining a window bay in the otherwise serious hallway; and as rich-toned wall and ceiling coverings in the study and bedrooms. “I’m not afraid of using color,” Adario admits, though he limited his choices to stock hues. When used on walls, ceilings, or built-in bedroom closets, the material is applied as panels framed by thin strips of walnut, “making it more precious.” In fact, the architect refers to such treatment as boiserie.

Actual woodwork is entirely walnut. It appears as regular millwork, lining portals and doorways, forming built-in furniture, and paneling ceilings and walls, occasionally in the guise of tambourlike vertical dowels. The characterful wood is also used to frame the apartment’s windows, most notably those on the living quarter’s two extended walls, one facing the Arno, the other overlooking Piazza Santa Maria Soprarno.

Adario had fun with another favorite material: ceramic clay. Collaborating with artist Francesco Ardini, he crafted rosettes and fantastical beetles as door pulls for bedroom closets. More unusual still are the large glossy-tile panels Ardini made for the kitchen. Using a finger-paintlike technique that Adario compares to “kids drawing on dirty cars,” they depict an abstract landscape resembling the nearby Ponte Vecchio. As pragmatic as they are charming, the tiled panels open to reveal an oven, cooktop, fridge, dishwasher, and all the other paraphernalia of a well-equipped kitchen. When they’re closed, only the sleek stainless-steel and marble island with its twin sinks and sculptural faucets remains in view. Could there be a cooler place to prepare a late-night bowl of pici all’aglione while sipping Chianti Classico?

Enviable eye-candy furnishings abound. Many pieces are incontrovertible classics. To wit, Jan Bocan’s woven straw seating for Thonet, an Ingmar Relling leather armchair, and Marcel Breuer’s Cesca chairs, which surround Pietro Chiesa’s glass dining table, circa 1934, for FontanaArte. Not far from the hallway’s vintage turquoise resin stool stands an Otto Schulz cabinet dating to the 1920s; another one graces the master bedroom where it keeps company with a quirky Philip Arctander chair, bound to be comfy thanks to its creamy sheepskin upholstery. Meanwhile, a quartet of antique rugs that Adario purchased on a Christmas trip to Morocco brings additional subtle colors to living, dining, and study areas.

Added to the mix are elements of the architect’s own design: the floating, double-sided sofa at the juncture of the living and study spaces, the hallway’s window banquette, and the beds with side tables. All by way of saying that everything is either vintage or custom created—you would be hard-pressed to find a production-line piece in view. The apartment is more than ready for its close-up.

> See more from the Winter 2019 issue of Interior Design Homes 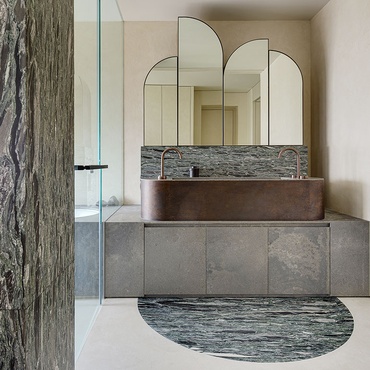 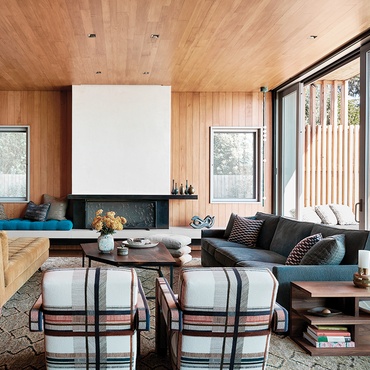 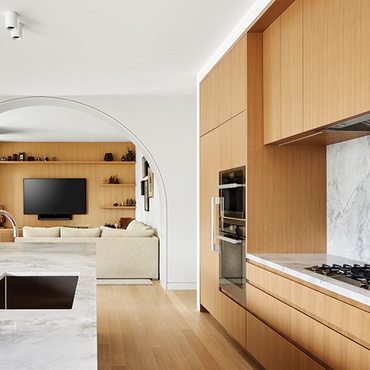