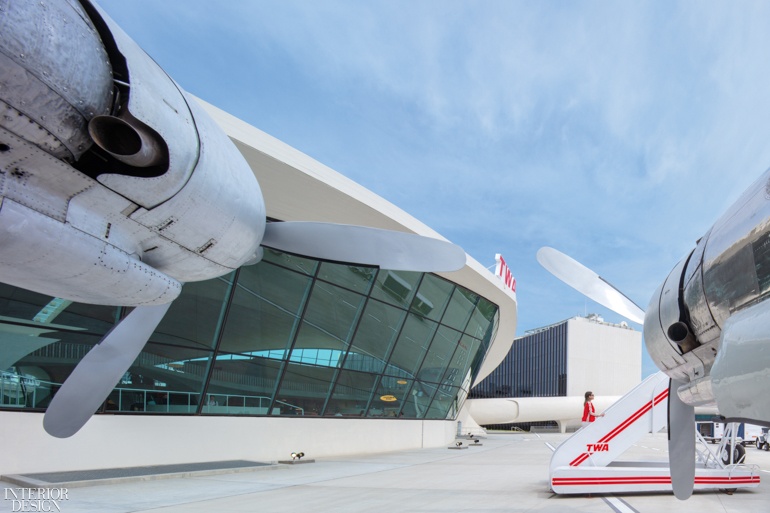 You expect Don Draper to appear any minute at the check-in counter. He would then head past the chili pepper–red sunken lounge to a room in the hotel, which you can see through the soaring glass wall. The raptorlike TWA Flight Center—a terminal for Trans World Airlines, designed by Eero Saarinen, built in 1962, and mothballed in 2002—is finally back, transformed into the lobby, restaurant, and ballroom of the new TWA Hotel at John F. Kennedy International Airport in Queens. The voices of Frank Sinatra and the Beatles float in, establishing the period and mood; hotel staff are uniformed like TWA flight attendants; an elegant Lincoln Continental convertible, circa 1962, the model that looks like a floating barge, is parked at the entrance. But the hotel delivers the punch line sitting on a piece of recreated tarmac between the iconic terminal and the two new hotel wings: The Connie, a 1958 Lockheed Constellation—the four-propeller airliner commissioned by TWA’s owner, Howard Hughes, that was the state of the art in transcontinental travel immediately before the jet age—still attracts passengers, though now they climb aboard just for cocktails.

Looking like a magnificent eagle touching ground, Saarinen’s terminal was one of the aspirational monuments of its time—a segmented concrete-shell structure whose daring construction technology served a sophisticated artistic idea, the “upward soaring quality of line,” as Saarinen put it, defying the “form follows function” dictate of the day: “The structural and rational cannot always take precedent when another form proves more beautiful.”

Function followed beauty at Saarinen’s terminal. Curving form and space subtly thrilled passengers to the idea of flight. As a young man, Saarinen studied sculpture, and he was, as his childhood friend Florence Knoll once told me, “at home in the curvilinear world.” Perhaps straight-lined Miesian rationalism was the dominant postwar architectural style, but there was also an organic subtext to the times: Isamu Noguchi’s freeform table and sofa; kidney-shape pools; biomorphic sculpture, painting, and landscape design. Saarinen brought those fluid geometries into the floor plan and restaurant mezzanines at the flight center, extending compound curves from the roof into spaces where people walked.

Ahead of its time architecturally, prescient given today’s digital extravaganzas, this symbol of dynamic progress could not keep up with aeronautical advances, and within a short decade of its inauguration, the terminal was obsolete. The 80-seat Constellation gave way to the much larger Boeing 707 and eventually to the 747—the first Jumbo Jet—overwhelm­ing the capacity of the terminal, which was finally vacated in 2002. Shuttered by the Port Authority of New York and New Jersey, the flight center—whose interior and exterior were listed on the National Register of Historic Places in 2005—was stabilized in a decade-long series of restoration efforts led by Richard Southwick, director of historic preservation at Beyer Blinder Belle Architects & Planners. In 2015, Southwick began a second phase of restoration, after hotelier Tyler Morse, CEO of MCR and Morse Development, won the RFP to redevelop the terminal as the key structure in a new $265-million hotel and events center. The latter allowed the hotel to achieve a critical mass of rooms that assured its profitability, while the combined facility basically financed the restoration of the terminal as its lobby.

Though the program of arrival and departure of a terminal and hotel largely overlap, the adaptive reuse of the flight center required satisfying current needs and codes. Inside, for instance, Southwick connected the lower and upper lobbies with new ADA ramps—broad pathways enhanced by sculpted walls whose contours capture the buoyant lift of Saarinen’s design. BBB staffers researched the architect’s archives at Yale University, where they found the project drawings and even sample boards, which were helpful in recreating the original materials and color palettes. Thus Southwick was able to accurately restore the first-class mezzanine Ambassador Lounge, which Saarinen had designed with colleagues Knoll and Charles and Ray Eames.

Besides the removal of service appendages, the only major intervention in the terminal proper involved a baggage-claim area that, although original to the “period of significance” (1962 to 1970), had been heavily modified over the years. Adam Rolston, Drew Stuart, and Gabriel Benroth of INC Architecture & Design transformed the space into a small ballroom, with an expanse of upside-down umbrella ceiling fixtures bathing the room in reflected light. INC was also responsible for the new 50,000-square-foot, three-story subterranean events center, located 30 feet below the Connie’s patch of tarmac. For it, the team emulated the strict geometries of Saarinen’s early rationalist buildings. “Mies van der Rohe influenced Saarinen who influenced us,” Rolston explains. “We pursued a strategy of layering to achieve depth and complexity.” Hence the rich stratification of woods and metals on the walls, while backlit clerestories provide illumination and a sense of openness that prevents the underground spaces from feeling claustrophobic.

Lubrano Ciavarra Architects worked with the hotelier from the beginning to develop the master plan that won the RFP. Principals Anne Marie Lubrano and Lea Ciavarra divided the seven-story, 512-room hotel into two partial crescents—the Hughes Wing and the Saarinen Wing—each connected to the terminal lobby by the long tubes that originally led to plane-boarding satellites. The architects kept the twin aluminum-and-glass buildings simple, sober, and straightforward—a neutral backdrop that “celebrates and preserves the legibility of Saarinen’s flight center,” Lubrano says. “The wings’ verticality serves as a counterpoint to the horizontal dominance of their length, and is consistent with examples in Saarinen’s oeuvre,” Ciavarra adds. The firm devised curtain walls that are seven layers of glass and 5 inches thick to protect rooms from the deep boom of JFK’s ubiquitous jets. LCA also designed the roof deck atop the Hughes Wing, which features a bar and lap pool with a built-in bench overlooking the runway and Jamaica Bay. “Sitting there with a drink, watching the planes, is really an unprecedented experience,” Lubrano says.

Michael Suomi and Sara Duffy, respectively principal and senior interiors associate of Stonehill Taylor, used details to bring Saarinen into the hotel’s interiors. They furnished the guest rooms with the architect’s seminal Tulip table and Womb chair. Staging the rooms for romance, the designers included a small built-in martini bar that appeals to everyone’s inner Don Draper. With rooms on both the terminal and runway sides of the buildings, Stonehill Taylor oriented each bed to face the view. The Saarinen building and the airport itself remain the focus of the rooms. “The goal was to bring the sexiness, allure, joy, and wonder of travelling back to JFK,” Suomi explains. “And to not screw up the Saarinen.”

Saarinen’s flight center was never just a building to look at and use: It was an event that offered the excitement of architecture infused with the idealism of technological progress that would benefit society. The reinvention of the terminal as an immersive period-inflected experience compounds that original sensation. Saarinen conjured an anti-gravitational building to which the new team of architects and designers has added what Rolston calls “high-performance nostalgia.” The TWA Hotel has time-machine power to transport visitors into a reverie about lives improved through beauty—it’s an authentically optimistic vision and they enter and leave the building feeling as elated as an upbeat Sinatra song.

> See all images on the project slideshow

> See more from the September 2019 issue of Interior Design