10 Modern-Rustic Weekend Houses in the Country

Hot summers in the city get old pretty fast, so having a weekend house in the country is a luxury. But that doesn't mean that luxury can't be rustic. Here are 10 residences that are stunning in their get-away-from-it-all simplicity. 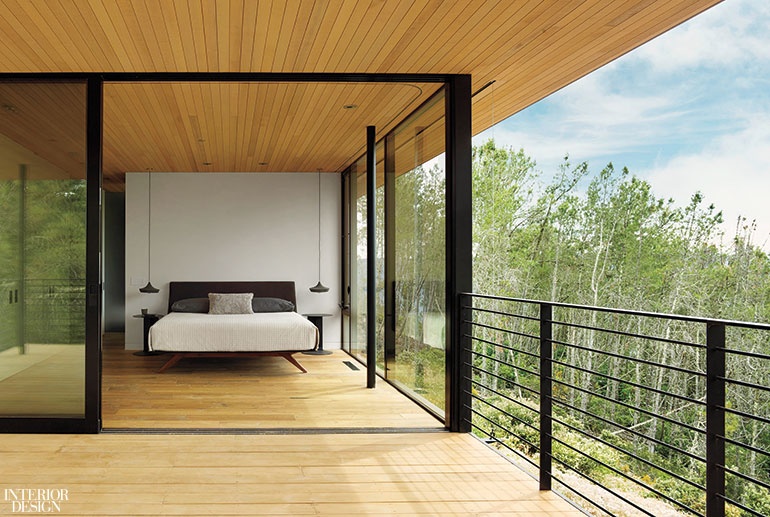 Two San Francisco denizens working in finance and tech came to Aidlin Darling Design with a straightforward proposition. Create a simple, efficient house, restrained in cost and scale, for their empty hillside site in Glen Ellen, about an hour north of the city. The couple’s only imperative? A single-story plan. Since Barry Mehew and David Rice were familiar with tending to aging relatives, they knew to avoid the hazards staircases present (their main residence, a four-story Victorian in the city, has plenty). Although they envisioned this new house as a weekend getaway for now, they anticipate eventually spending most of their time there, and downsizing to a pied-à-terre back in the city. Read more about this project

In the Danish shelter magazine that Finn and Janni Holm subscribe to, architect Jan Henrik Jansen was pictured sitting in front of a house that he had constructed with his own hands. “We just rang him and asked him to do one for us,” Janni Holm says. “That’s where our adventure started.” The Holms had decided to build a new home on a lot and a simple wooden farmhouse was what they had in mind. What they got was entirely different, thanks to Jansen’s standard procedure: always conceiving more than one solution for a project. He first showed the Holms a design that corresponded exactly to their farmhouse brief. Then he surprised them with plans for a radically different idea: a round house. Read more about this project 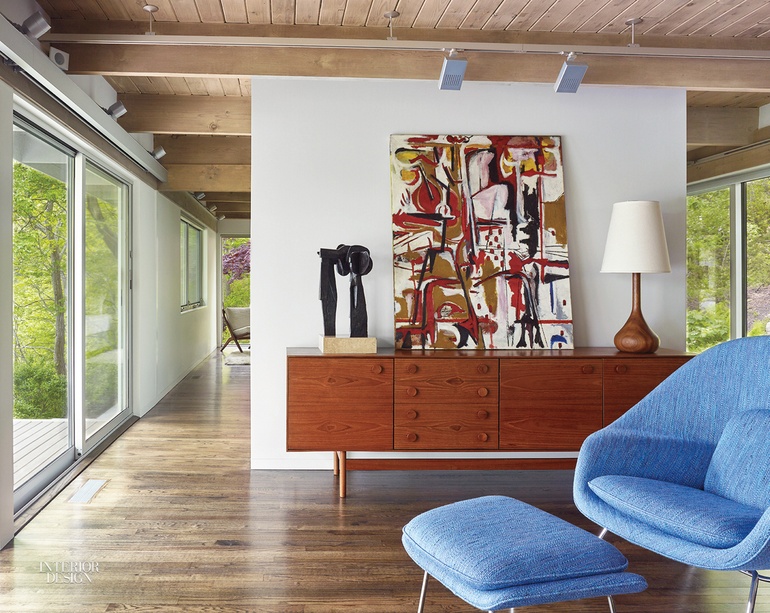 Modernist royalty, by marriage, Lilian Swann Saarinen had met her husband, Eero, when she was studying sculpture at the Cranbrook Academy of Art, headed by his father, Eliel. After the younger Saarinens’ divorce in 1953, she moved to Cambridge, Massachusetts, with their two children and asked former Eero Saarinen and Associates architect Olav Hammarstrom to expand a fisherman’s cottage in the Cape Cod town of Wellfleet for use as a low-budget family getaway. “On the Cape, a lot of architects built on a dime and a prayer,” SPG Architects principal Eric Gartner explains. Considerably more painstaking was his own task: updating the Hammarstrom design for repeat clients, one in financial services and the other a sculptor. Read more about this project

4. The Success of Andreas Martin Löf's House Near Stockholm Lies in Being Playful and Taking Risks 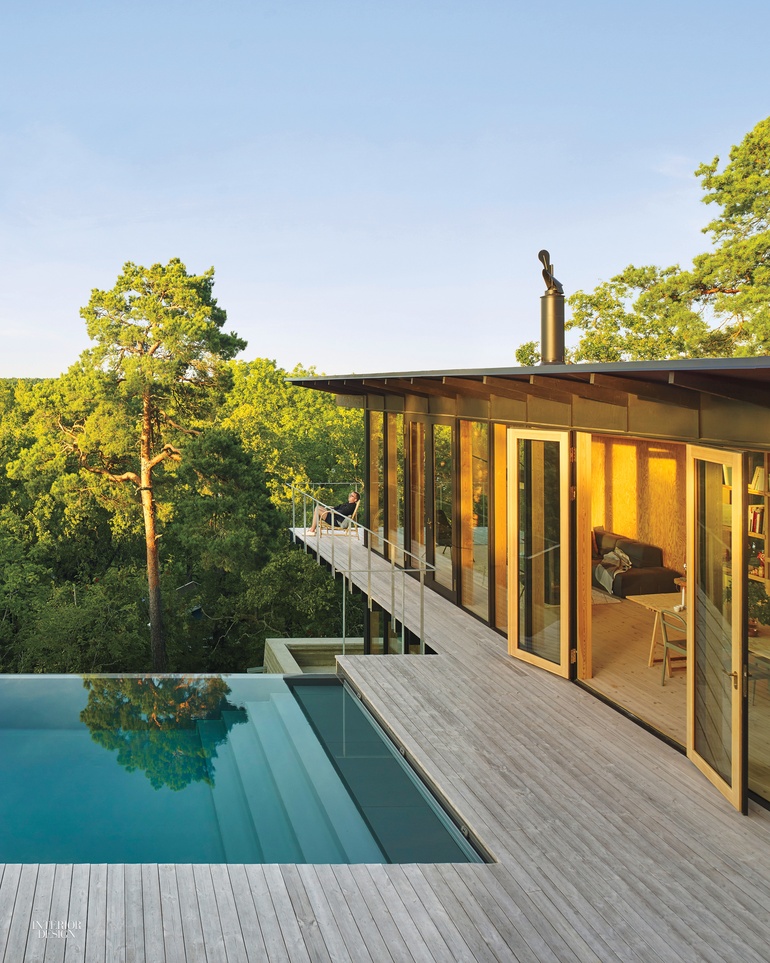 “Everybody was against it,” Andreas Martin-Löf says, looking at the offending infinity pool outside his weekend house in the Stockholm archipelago. “My friends thought it was nouveau riche. They wondered why I couldn’t just go down to the jetty for a swim, like everyone else.” Traditionally, Swedes favor rustic summer retreats, and Martin-Löf concedes that he usually dislikes “luxury” architecture both personally and in his work at Andreas Martin-Löf Architects. Yet he was intrigued by the possibility of the infinity pool as a mirror for the property’s pine trees and expansive water views. “The pool is a crucial part of the success of the house,” he continues. “You have to be a bit playful and take a few risks.” Read more about this project

Read more: 15 Incredible Pools from Around the World

A real-estate entrepreneur clipped and saved a newspaper story about Arjun Desai and Katherine Chia’s glassy weekend pavilion that won a Best of Year Award in 2013. The entrepreneur was intrigued by the way the house practically floated above its spectacular surroundings, a bucolic estate in rural New York—because he had just bought 60 acres on a remote peninsula jutting into Lake Michigan. Arguably even more extraordinary than the New York site, this one sits between a cherry orchard and a bluff plunging 120 feet down to the water. Read more about this project 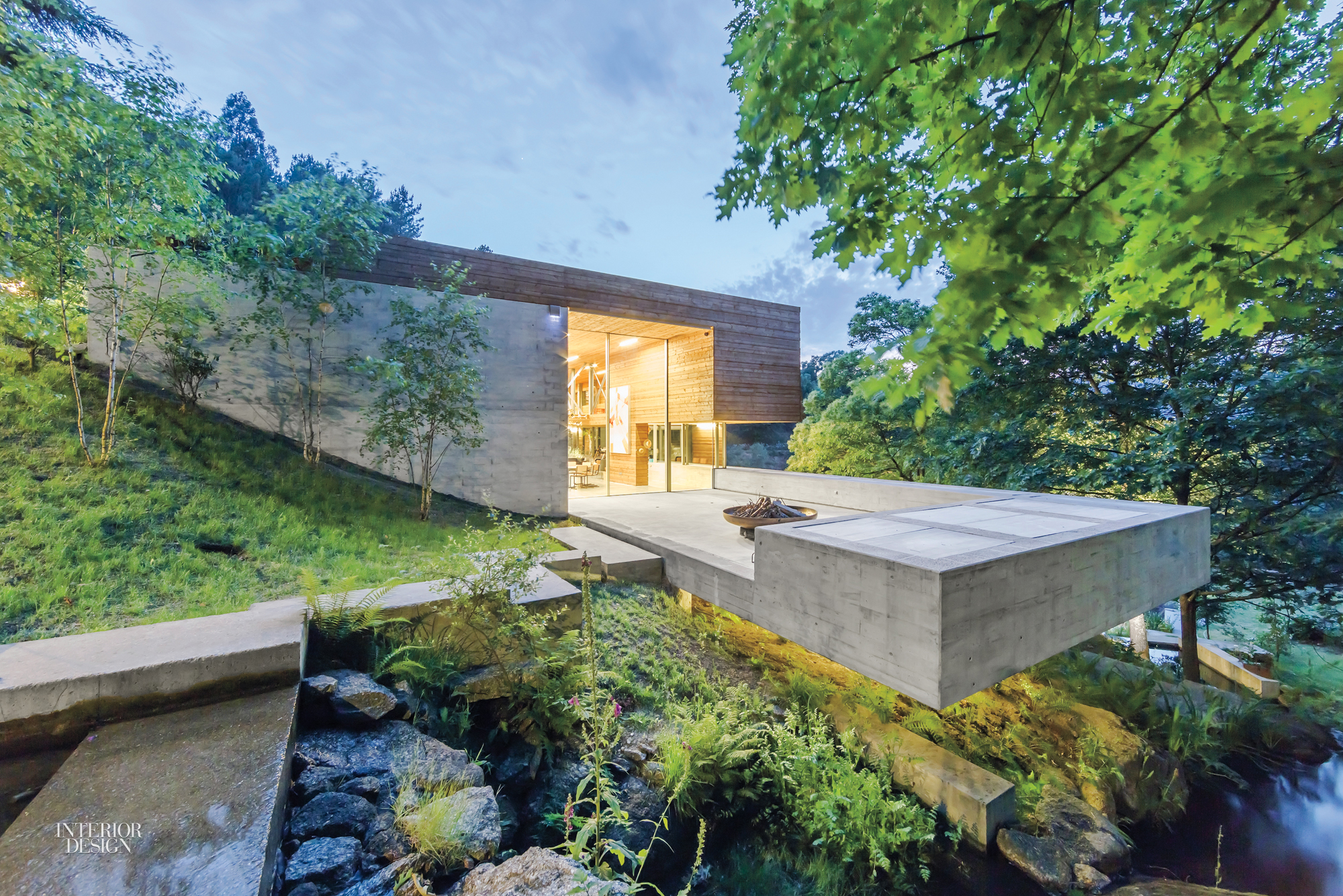 Modernist-minded designers often mine bodies of water for inspiration. Frank Lloyd Wright’s Fallingwater—perhaps the greatest house of the 20th century—wouldn’t exist without the stream that runs, dramatically, below it. Following in this storied tradition, Atelier Carvalho Araújo used water as both guide and counterpoint in designing a house in Vieira do Minho, Portugal. The site is a steep slope overlooking the Caniçada Valley, about 20 miles northeast of Braga. A stream meanders down the site, connecting ponds at the top and bottom of the hillside, both now corralled into freeform pools.“Architecture must have the gift of awakening sensations, emotions,” principal José Manuel Carvalho Araújo says. “The only thing I don’t want to evoke is indifference.” Read more about this project

7. Nathanael Dorent and Lily Jencks Conceive Stone-Clad House Near the Estate of Her Father, Charles 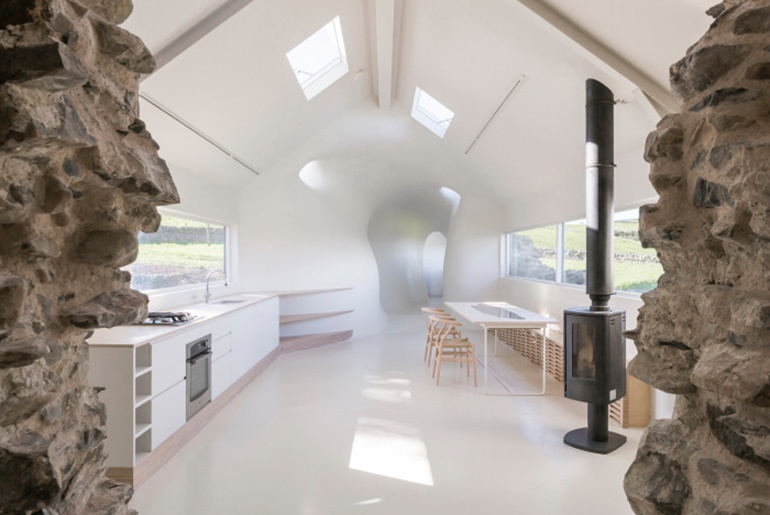 When it comes to delivering the unexpected, Nathanael Dorent and Lily Jencks, respectively 33 and 35 years old, have already developed a reputation. The pair transformed a tiny tile showroom in London with an installation of porcelain planks, playing cleverly with geometry in just four shades of gray to achieve a dazzling op art effect—a tour de force that landed right on the cover of Interior Design. Now, with a weekend house in Scotland, Nathanael Dorent Architecture and Lily Jencks Studio have defied expectation in very different ways. Read more about this project 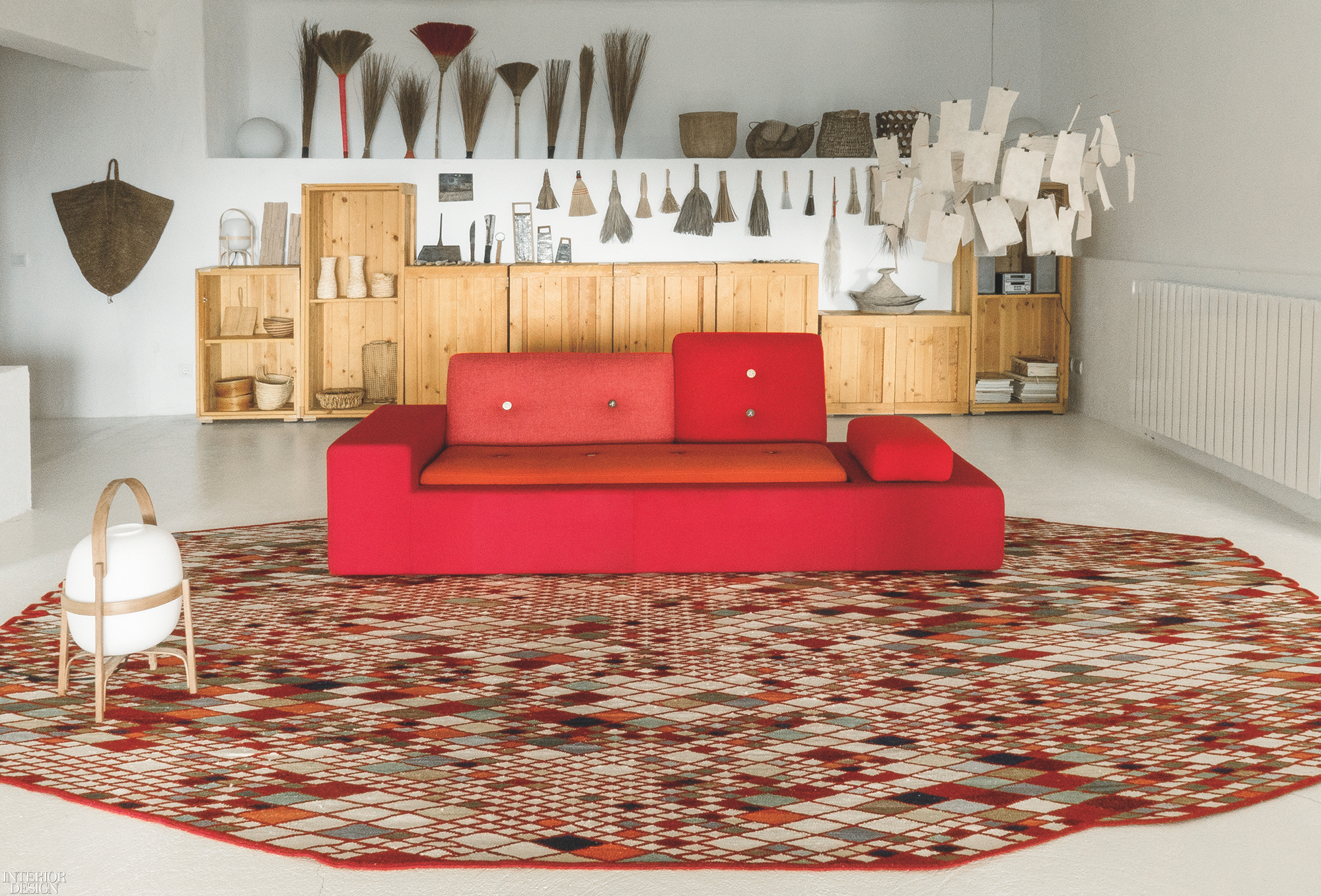 Nani Marquina has a thing for straw hand brooms. The textile designer and Nanimarquina founder owns more than two-dozen such specimens, sourced from locales as far flung as Thailand, Pakistan, and Ibiza. Her collecting passion also extends to woven baskets, beaded necklaces, teapots, seeds, dried gourds, soap, succulents, and sand (stored in fish bowls), all of which garnish the Esclanyà, Spain, getaway she shares with her husband, photographer Albert Font. The 1970s dwelling has a whitewashed simplicity that renders it a perfect backdrop for the couple’s assorted ephemera. “The most important thing is not the container, but the contents,” Marquina says. Read more about his project

9. Architect Mathias Klotz Creates a Pair of Cottages on a Remote Island in Chile 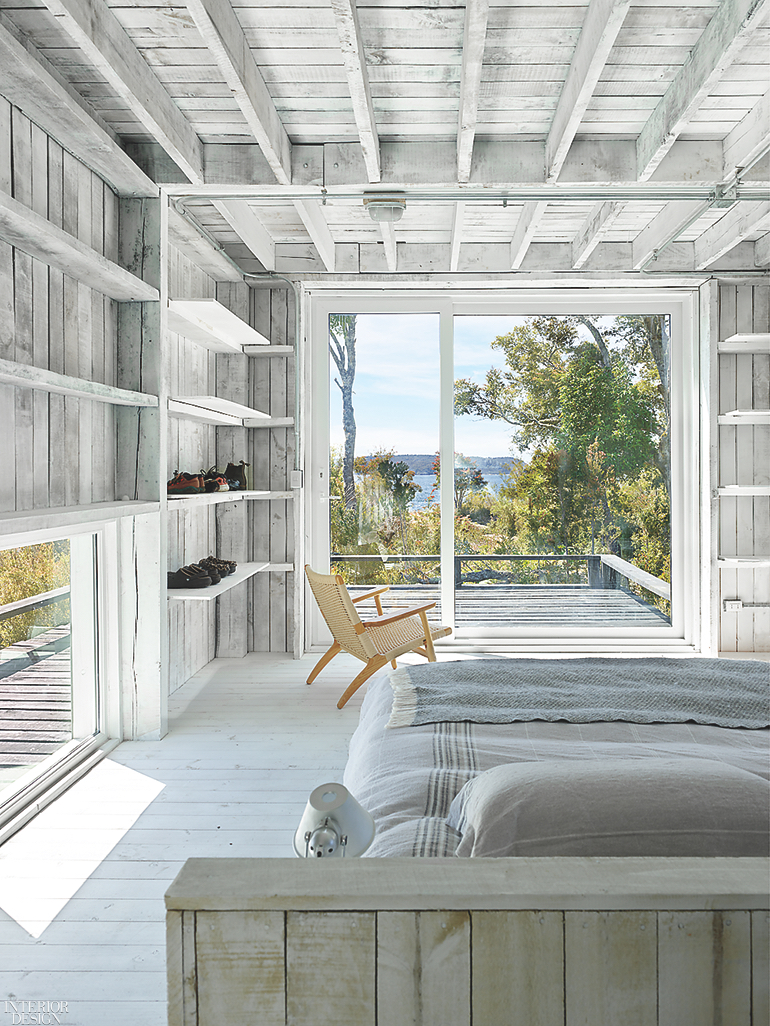 For Chileans—especially those who live in the frenetic capital, Santiago—a second home is an essential refuge, an escape to the serene beauty of the natural landscape. Architect Mathias Klotz, principal of his eponymous firm, has designed many such houses, characteristically with a clean-lined modernism that nods to one of his heroes, Ludwig Mies van der Rohe. For his own family’s retreat on a largely undeveloped coastal island, he used archetypal forms that evoke both past and present. Constrained by the remote location and tricky logistics, the result is a timeless design that blends into the pristine setting. Read more about this project 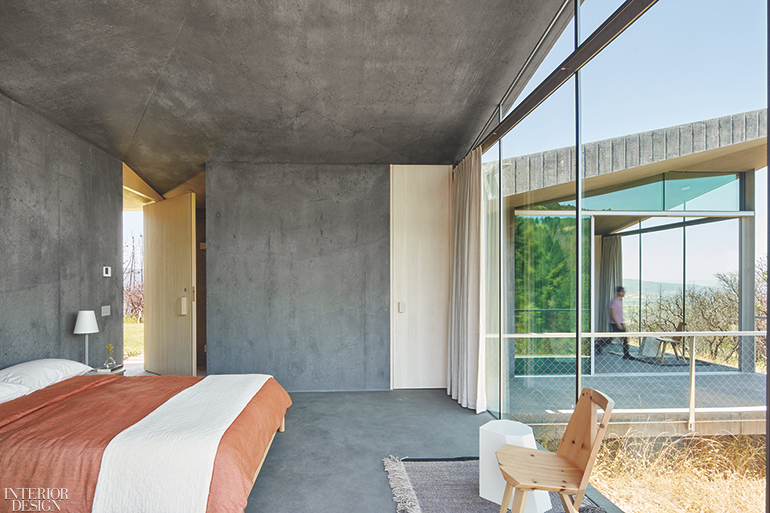 Casper Mork-Ulnes was born in Norway, moved to Italy at age 2, and came to San Francisco at 16. He also lived in Scotland and studied architecture at California College of the Arts and Columbia University before establishing Mork Ulnes Architects back in San Francisco. That’s an unusually lengthy introduction, granted, to an unusual small project in the Sonoma Valley town of Glen Ellen. Mork-Ulnes had remodeled the property’s original house for its previous owners. The new ones, a family of five, brought him back for a guesthouse. At 840 square feet, it comprises three volumes, each of which contains a bedroom and a bathroom. They’re arranged in a stepped configuration, sharing party walls and a canted roof but no internal corridor. Read more about this project