Tidying Up: Check Out These 15 Terrific Closets

We all know winter has come to a close when that familiar tingle of pollen returns to our noses. But there's another itch that manifests during the transition to spring: the urge to clean house. As we've learned from the sage advice of Marie Kondo, good storage is a key to organization. That's why we've gathered 15 terrific closets and wardrobes that make us want to tidy up. 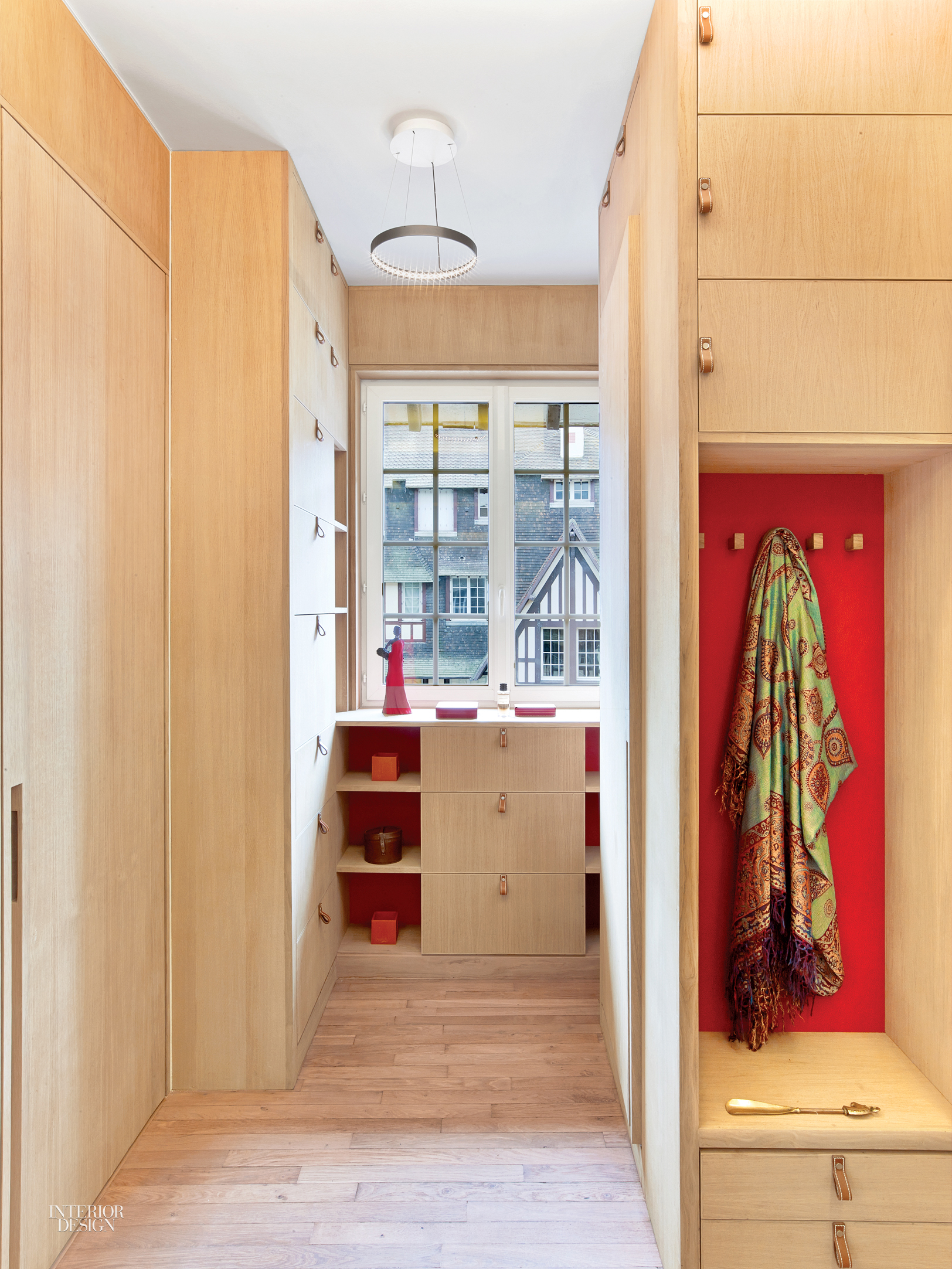 This Normandy Coast apartment already had compelling advantages: a location in a 1939 building, a half-timbered landmark; an appealing 1,300-square-foot layout, anchored by a central corridor; and original oak floorboards in near-perfect condition, having been protected for decades by carpet and rugs. “We kept the bones but modified the skin,” Seguin says. That meant using traditional wood and plaster in strikingly contemporary ways. Read more 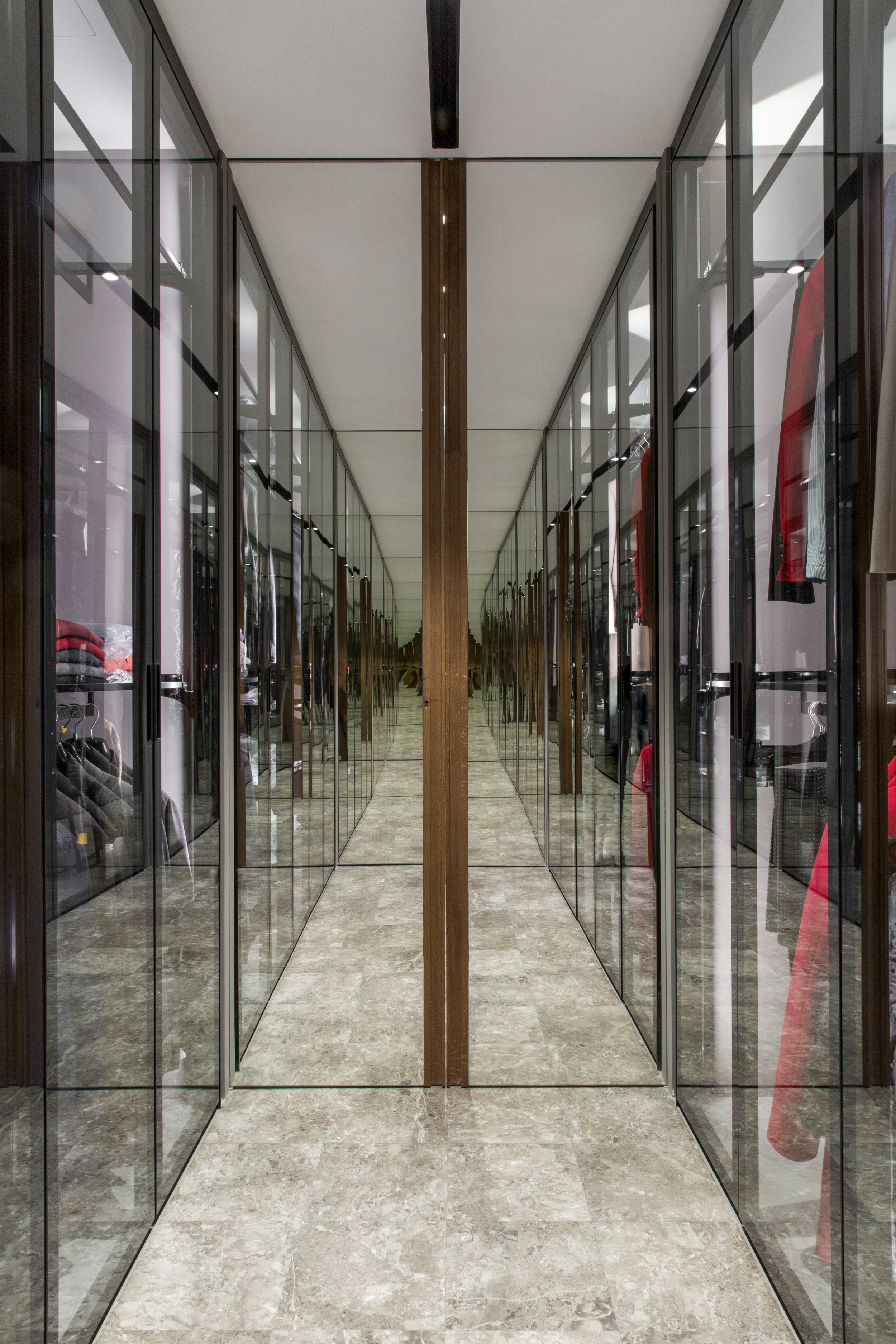 A couple in Palermo had been looking around for a new house; instead, while looking through a magazine, they found local Studio DiDeA and together embarked on a refreshing of their 1,500 square-foot apartment. The walk-in closet is mirrored reflective glass doors by Rimadesio. Read more 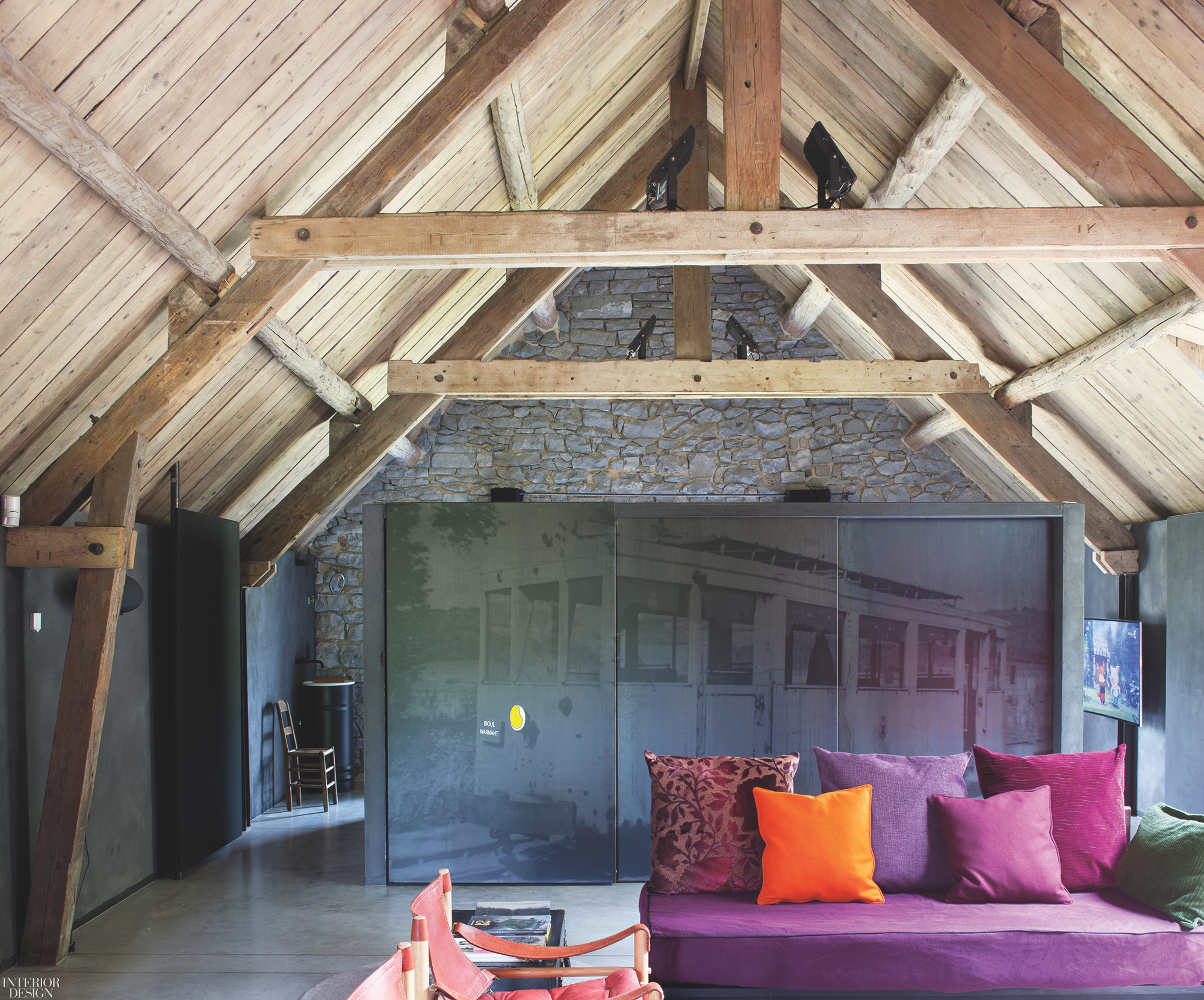 4. Atelier Starzak Strebicki Adds Up the Interiors of a Polish Flat 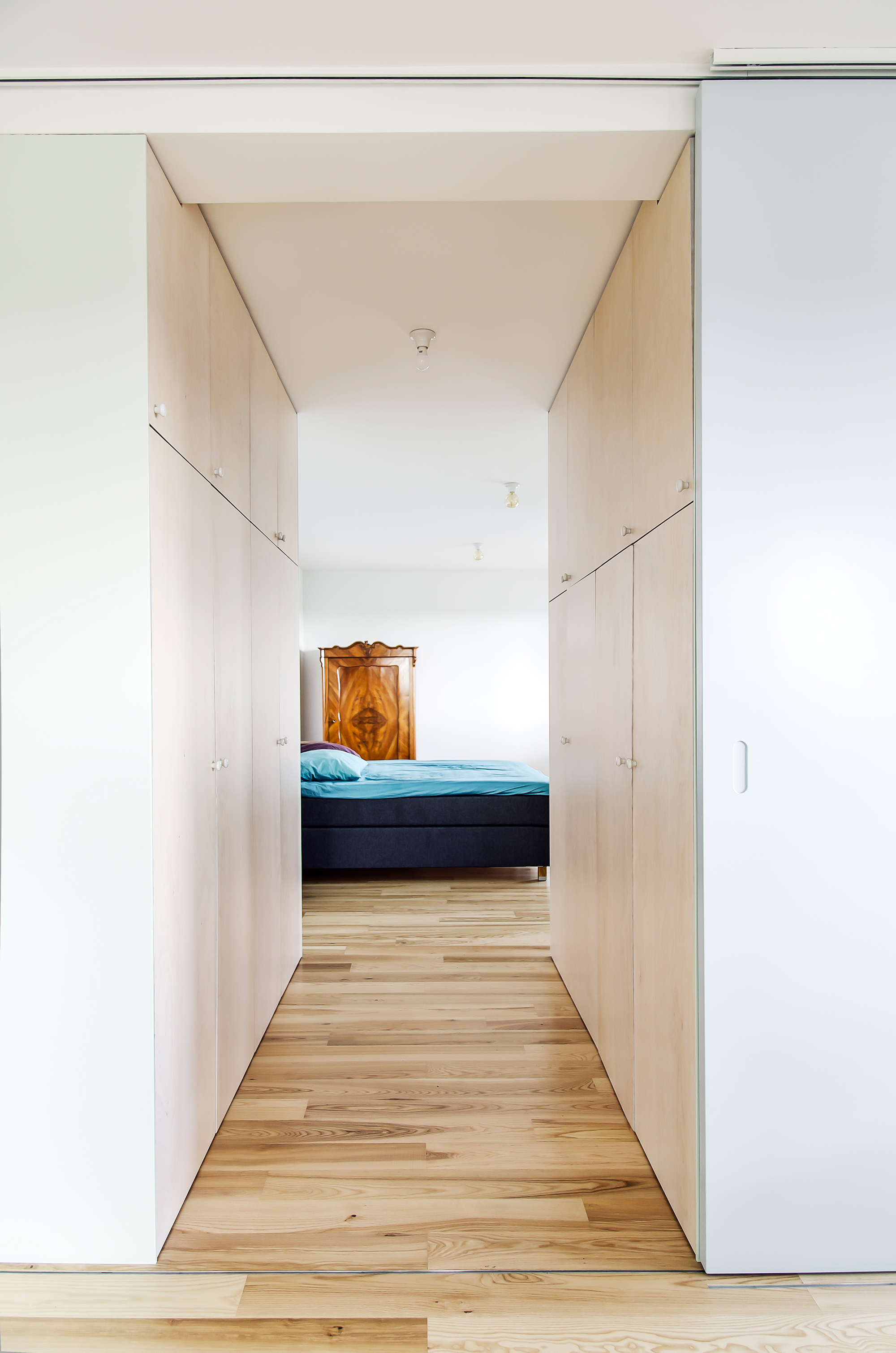 What do you get when you add up two apartments? For a 925 square-foot residence on the seventh floor of a building in Poznan, Poland, Atelier Starzak Strebicki founding partner Jola Strebicki got multitudes. The secret, Strebicki says, “was to convince the developer not to build any walls inside the apartments and leave them as one big open space.” She then built a series of mobile walls that allow rooms to divide or disappear behind expanses of cool blue and mint. Custom storage lines the hallway, with floors of ash. Read more 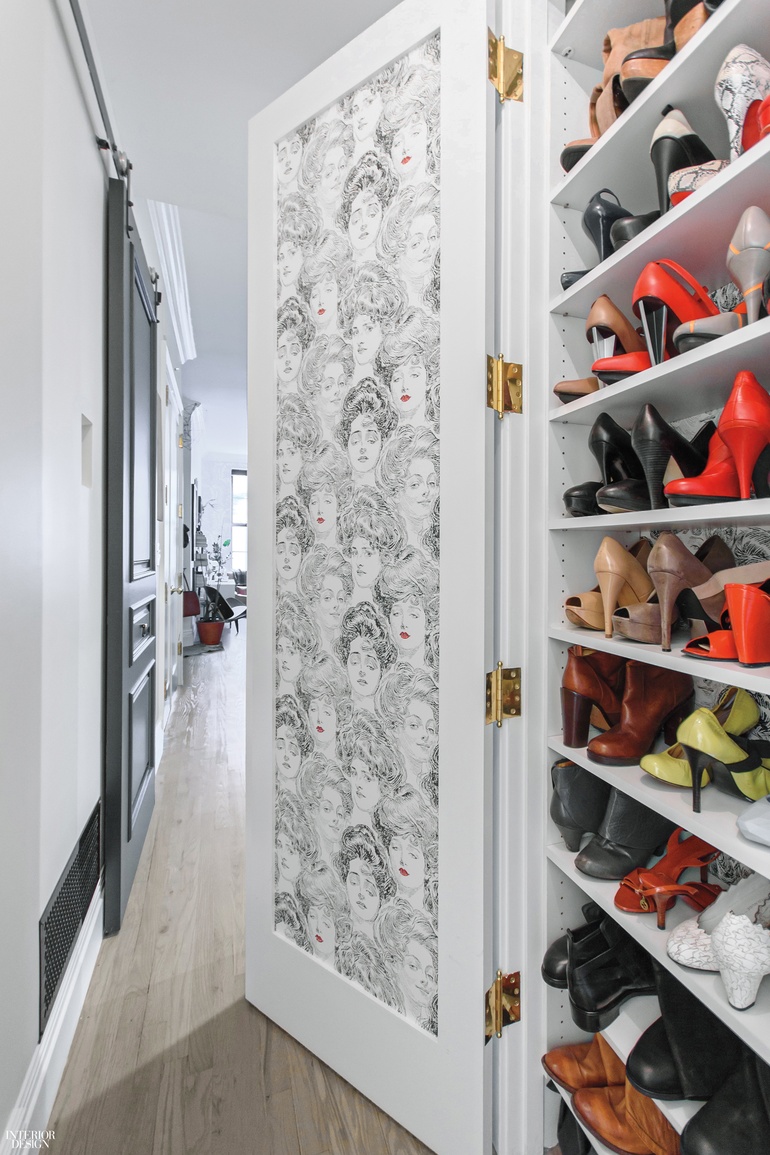 Business and pleasure can indeed mix—when a designer is her own client. Such was the case with Breanna Carlson, who renovated an apartment at 560 State Street (also known as one of Jay-Z’s former residences) into an intensely personal home worthy of her work portfolio. Wallpaper in the shoe closet is derived from a 1920s fashion print. Read more

6. Humbert & Poyet Combine Rough and Refined for the Interior of a Swiss Ski Chalet 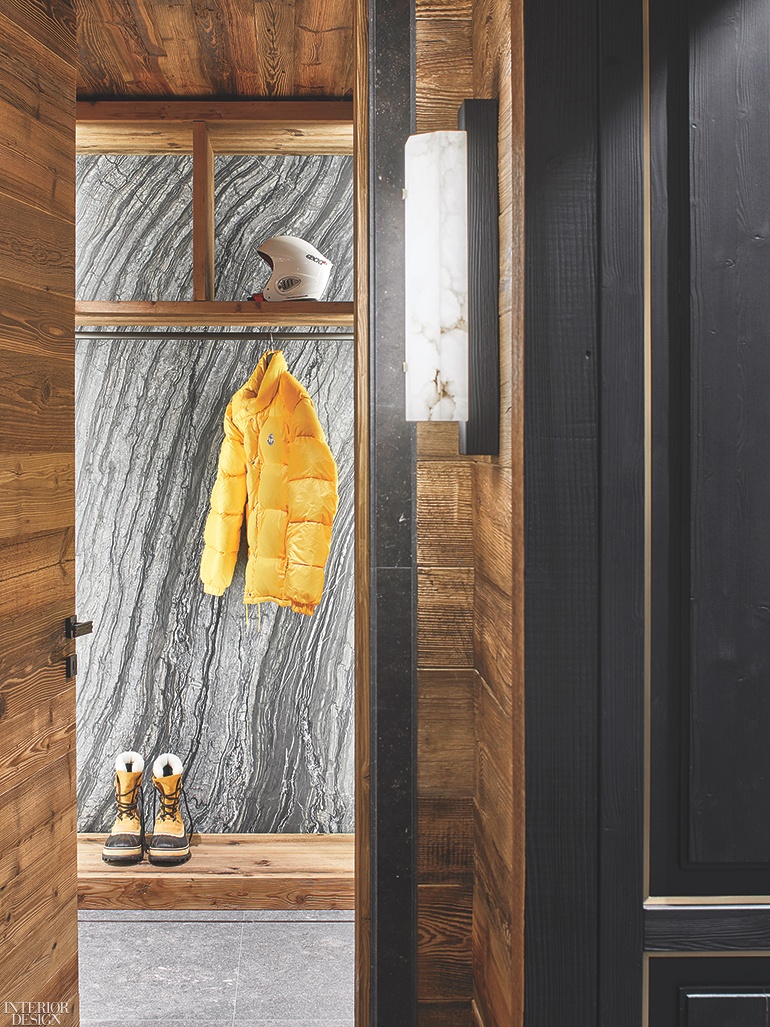 Humbert & Poyet have designed ground-up houses but prefer focusing on interiors, often entering projects when the shell is done but the inside is still raw. There’s nothing raw about their completed work, however, which 36-year-old Poyet describes as “like a movie set, the perfect environment for the perfect place for one particular moment that makes people feel beautiful and good about themselves.” Read more

7. SABO Invigorates a Fashion Forecaster's Paris Apartment with a Cheerful Array of Colors 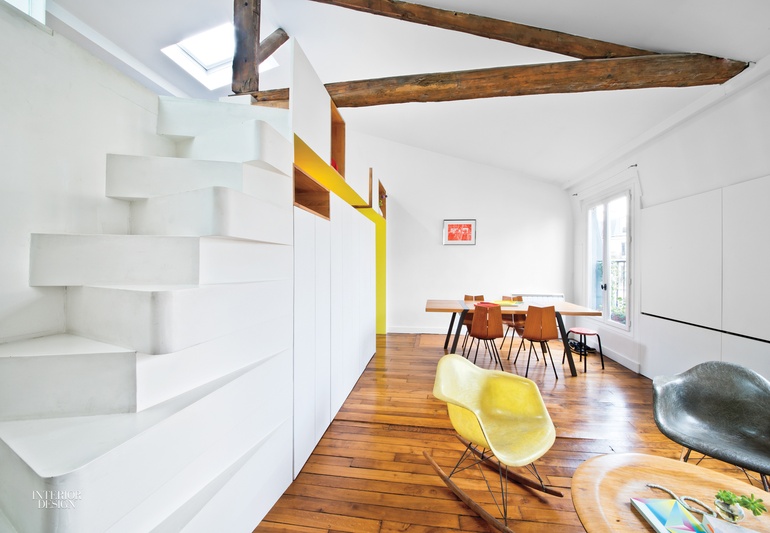 SABO may be short for sabotage, but in this case not the destructive kind. The firm name is an acronym for Super Architecture Beyond Object. Clearly the architect, who toggles between Paris and Brooklyn, New York, likes to think outside the box. Which is just what he did when renovating a 775-square-foot penthouse apartment in a century-old building in the Parisian neighborhood of Montmartre. The staircase leading to the lofted guest room integrates storage, accessible from within the adjacent closet. Read more

8. U-Labprojekte Elevates Multigenerational Living With a Pied-à-Terre in Madrid 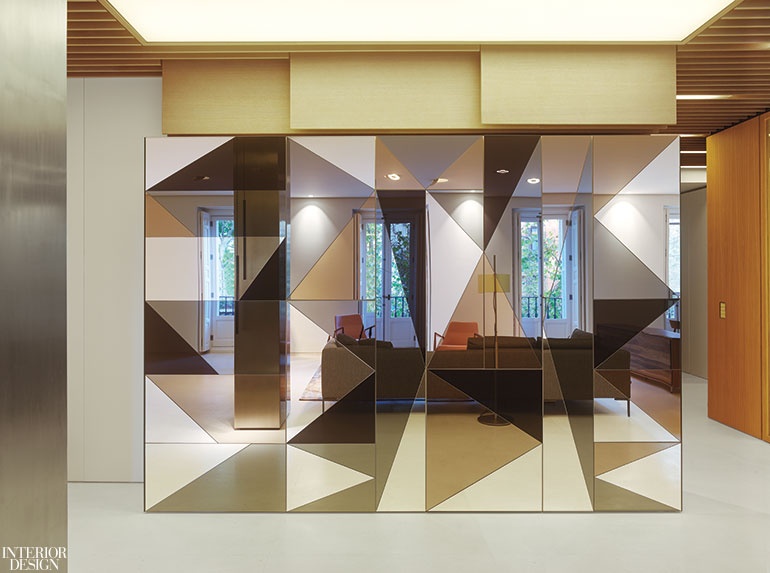 Walking along Madrid's prominent, tree-dotted boulevard Calle de Serrano, one will find old-school grandeur. However, the occasional minimalist facade does turn up. This kind of contrast between old and new happens inside the neighborhood’s residential buildings, too. One such example is an apartment by U-Labprojekte, a small, forward-thinking studio fond of manipulating simple materials to profound effect. Pictured here, the entry closet fronted in custom panels of bronzed, tinted, and clear glass reflects the adjoining living area. Read more 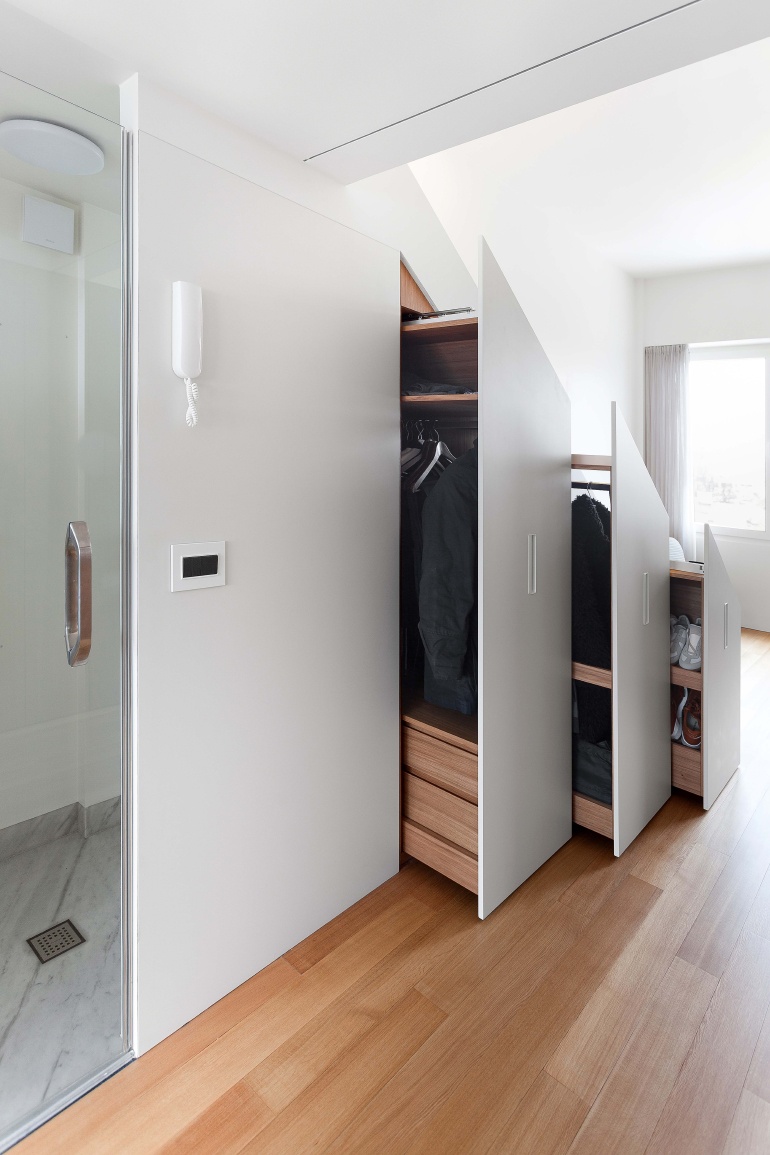 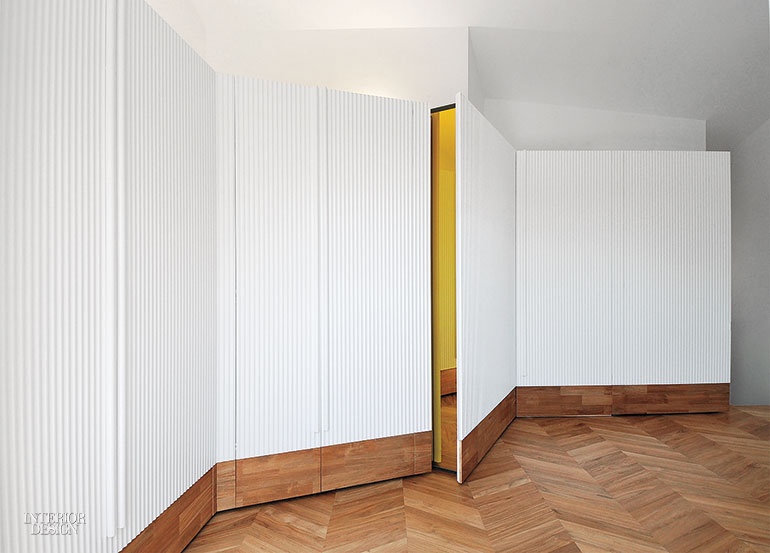 What a delightful surprise to discover in the historic heart of Cesena, a city between the better-known Ravenna and Rimini on Italy’s Adriatic Sea coast, a duplex apartment that’s thoroughly contemporary. Minimal, light, airy, and ingenious are all pertinent adjectives. Cedar cylinders, glued together and lacquered, form panels that conceal shelves, appliances, and an additional work surface in the apartment’s kitchen, and the same panel solution fronts the bedroom closets. Read more 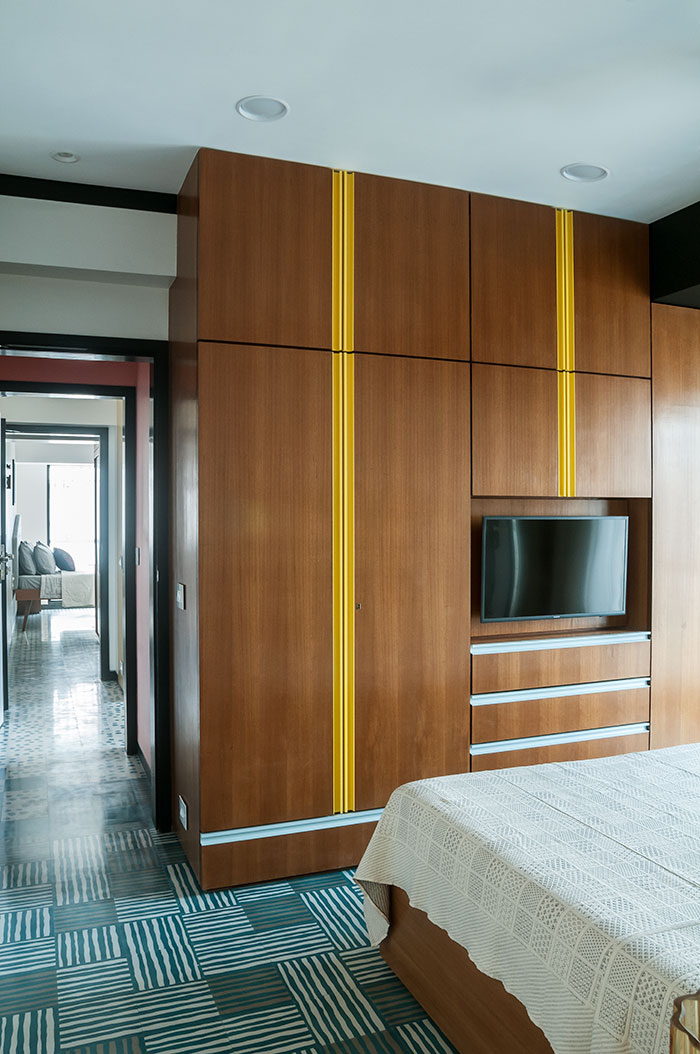 A young couple about to start a family had also just bought an apartment in Mumbai’s seaside Worli neighborhood—when the past came flooding back in the form of memories of a childhood apartment full of Art Deco objects and terrazzo tiles. The couple called their friends at MuseLAB with the idea of bringing the past into their present, 1,250-square-foot home. A teak veneer wardrobe occupies a full wall of the guest bedroom, with handles powder-coated in powder blue and sunshine yellow. Read more

12. Sim-Plex Design Studio Crafts a Hong Kong Apartment for Humans and Their Pets 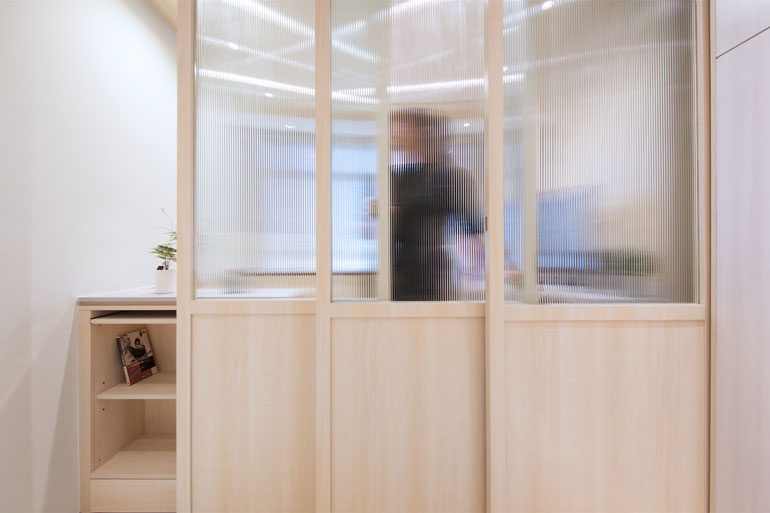 Patrick Lam needed to accommodate the differing needs of two generations and three species when he designed a 450-square-foot apartment in Hong Kong. But Lam, founder of Sim-Plex Design Studio, was not daunted, creating a comfortable and flexible space for a young couple, a parent, a parrot, and a cat. The humans needed ample storage space, room to maneuver, and areas that could become communal. Sliding doors incorporate fritted glass. Read more 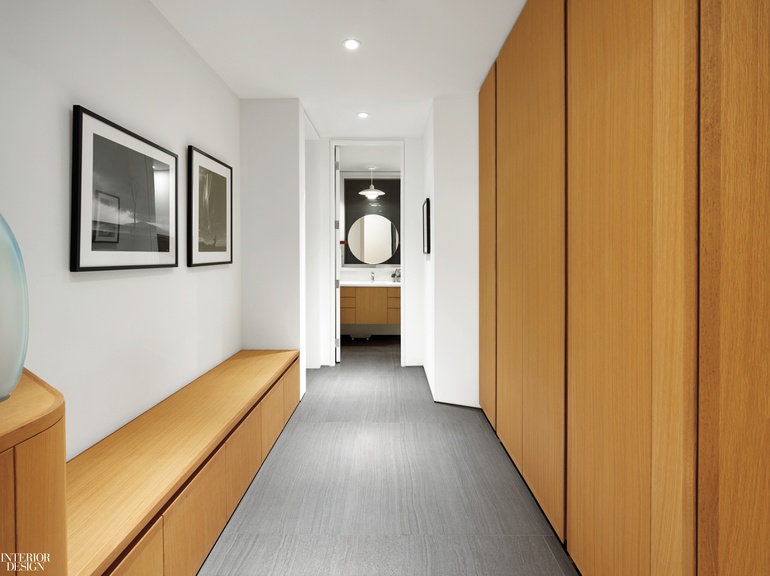 A search for an architect led the couple to another couple, Betsy and Shane Williamson of the firm Williamson Williamson. For the exterior, they selected cedar, echoing the cedar trees that grow there, plus slabs of limestone from a local quarry. Between the slabs, the horizontal joints are raked deep, a detail inspired by the brickwork of Frank Lloyd Wright’s Martin House in Buffalo. “Everything was designed to be accessible,” Shane Williamson notes. In the entrance, porcelain floor tile meets the oak of a built-in bench and closet doors. Read more 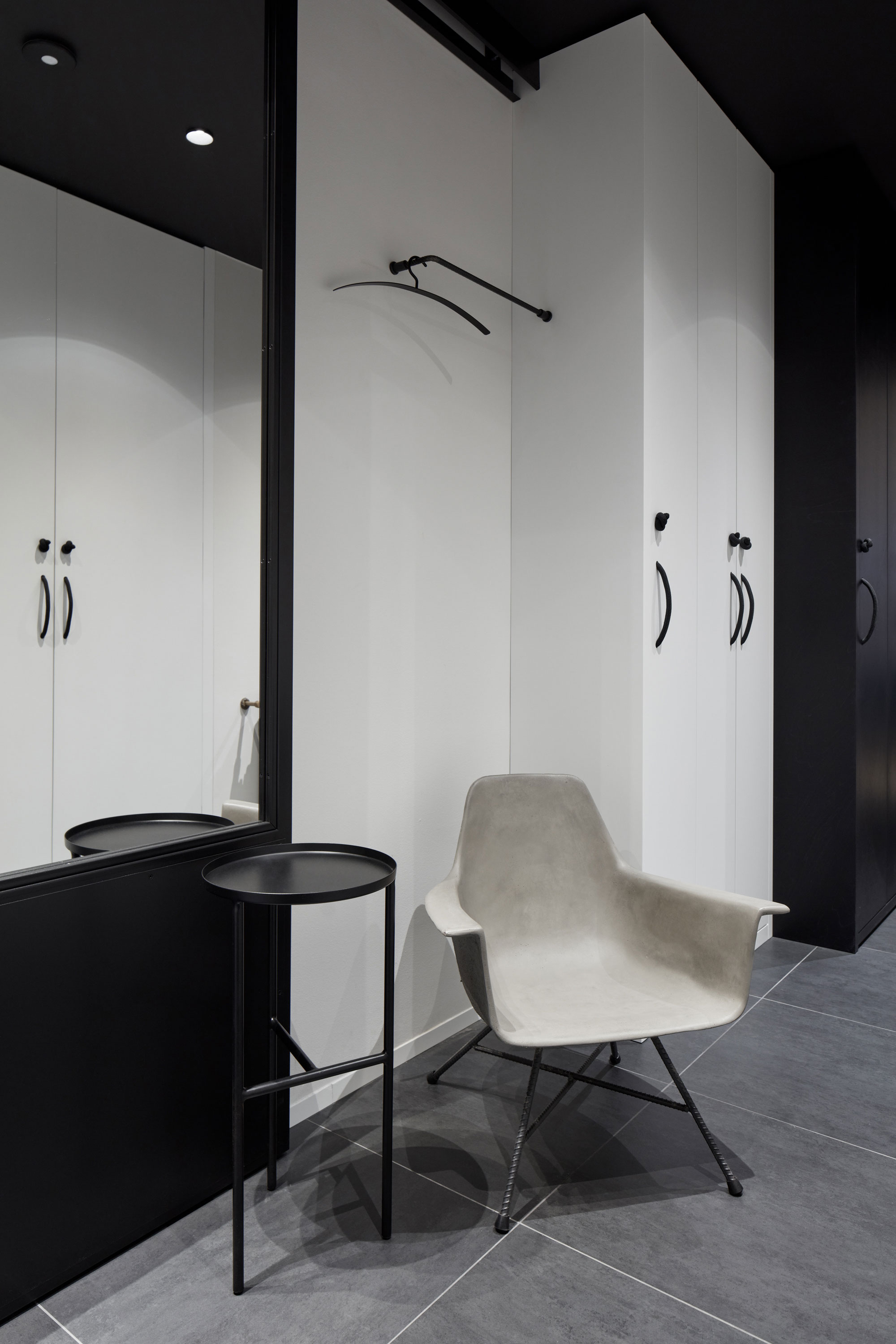 For an apartment in Prague, so completely up-to-date that only its original clad windows remained, developers and the local firm SMLXL decided to go back to basics for the interiors. A minimalist palette of black and white puts emphasis on details like the customized casing door and large-scale parquet flooring. A concrete chair sits in front of a custom steel mirror that hides the electrical switchboard. Read more 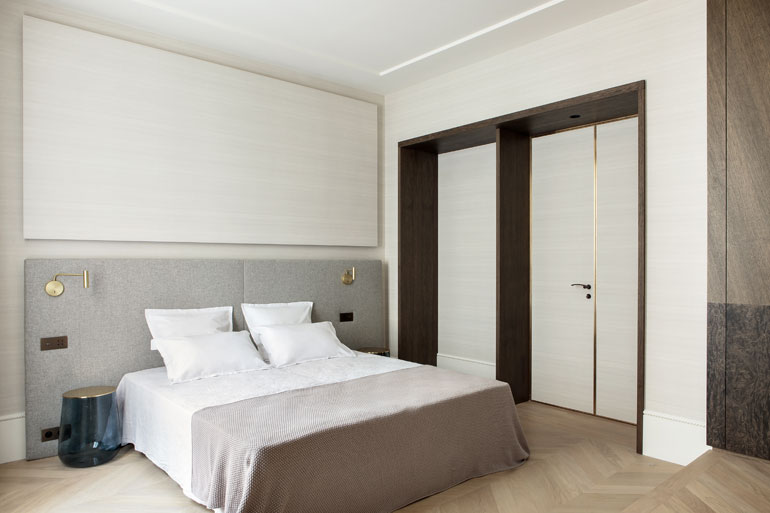 Founded in 1841 by a cabinetmaker, interior architecture firm Rinck has divisions that specialize in cabinet-making and boiserie, which can speed up their projects. For example, the firm completed a Paris apartment with views of the Eiffel Tower and the Seine in just six months. The 3,300-square-foot residence needed a complete overhaul as most elements were either damaged or outdated. Rinck restructured the layout while respecting the integrity of the 19th-century space. Read more