Forget the McMansion. Creativity abounds with a lack of square footage. Despite their size, these small residential and hospitality spaces have charm in spades—and big impact.

1. AM/MOR Architecture Brings Out the Best in a Tiny Manhattan Duplex 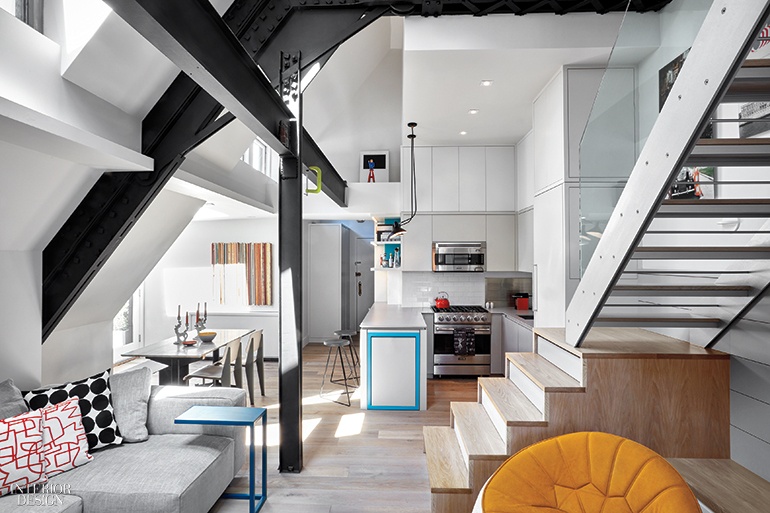 Using models, AM/MOR developed the architectural plan and the interiors scheme simultaneously, using woodwork to tie everything below the pitched roof together and fine-tuning the orientation of the seating. As needed, square footage was sacrificed in favor of flow, resulting in a total of 1,100. Every inch was a debate. Read more 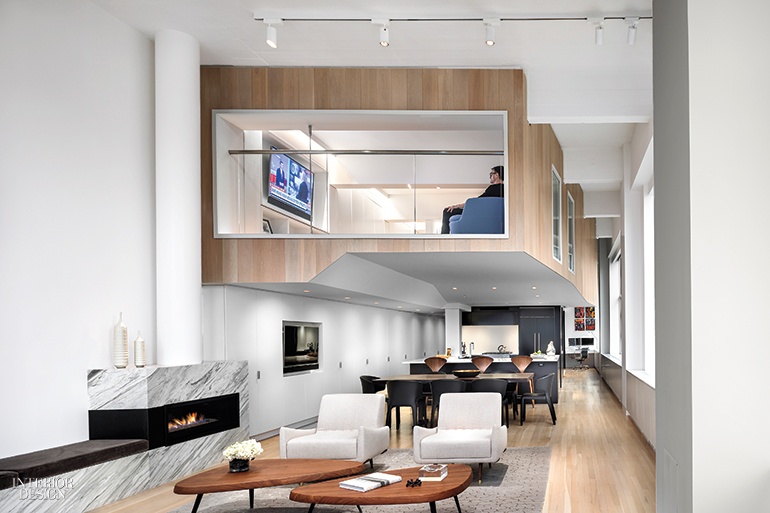 A funky West Village loft caught the eye of a CEO who was looking for a bachelor pad. It held lots of promise: a corner location and tall windows with river views. There were also drawbacks: a cramped upstairs sleeping loft, which obscured some of the windows and made the kitchen cavernlike. But the CEO knew that the right architect could work wonders. Joel Sanders Architect did exactly that by reconceiving the upstairs as what Sanders calls a “sleeping capsule.” Containing the master suite and a guest room, this asymmetrical volume floats free of the perimeter on three sides. Read more 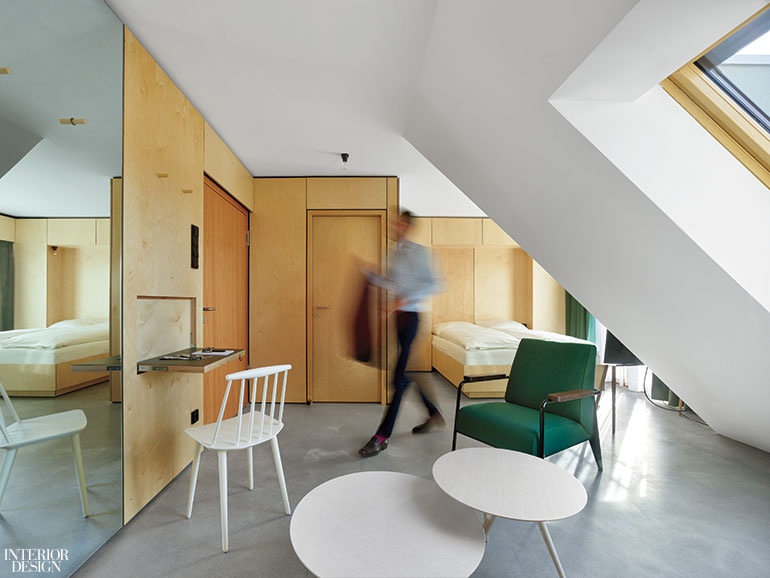 After studying at the University of Stuttgart in Germany, architects Benjamin Krampulz and Michael Meyer each formed their own firm. Six years later, they entered a design competition together and won, thus launching Krampulz Meyer Architekten. Since, the firm has completed the Kitz, a boutique hotel in Metzingen. Inside, a lobby wall boasts foliage-patterned wall covering, hunter-green tiles appoint the café, and rustic birch panels the suites. Read more 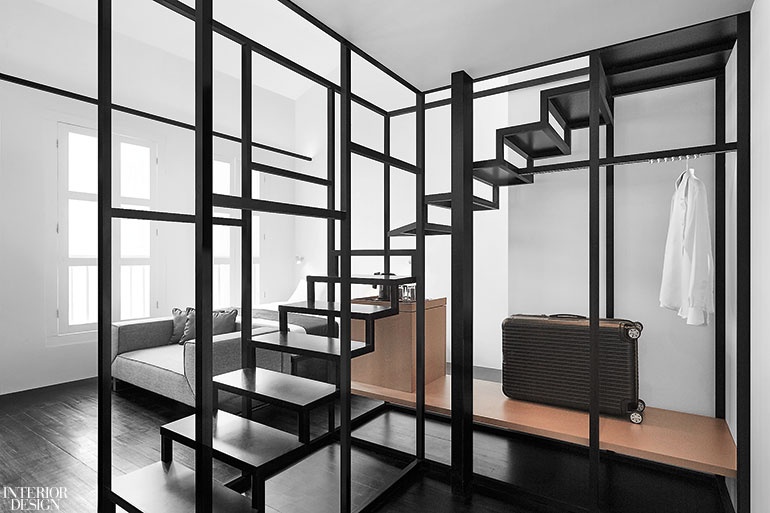 Spacedge Designs’ William Chan painted the six ajoining facades of this hotel black and white. Inside, referencing gray-scale photography and the austere lives of the country’s first Chinese immigrants, he continued the color scheme, staining the wooden floorboards in the 46 existing guest rooms and suites black. Powder-coated steel dominates the accommodations, its most ingenious use in the rodlike light fixtures that double as clothing racks; they stretch across the stark white ceilings like lines drawn in space. Read more

5. Lim + Lu Brightens Up a Bachelor Pad in Hong Kong 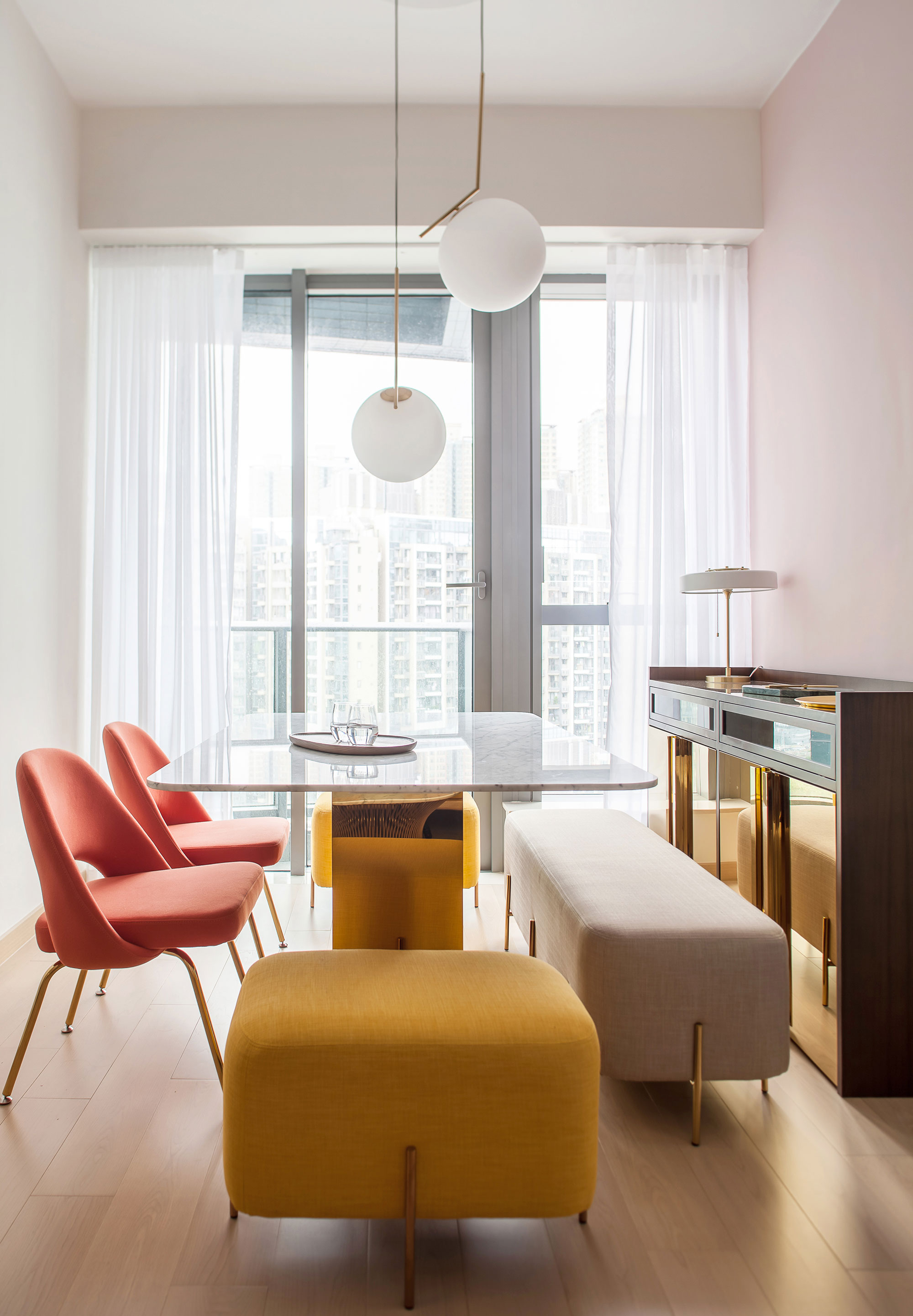 It takes a certain type of client to hire a design firm whose motto is “live differently.” For the firm in question, Lim + Lu, that client was an eccentric French bachelor looking to inject playful personality into a 500-square-foot Hong Kong apartment. The firm achieved the requested atmosphere by combining subdued, pale tones with dynamic pops of color and texture. Read more 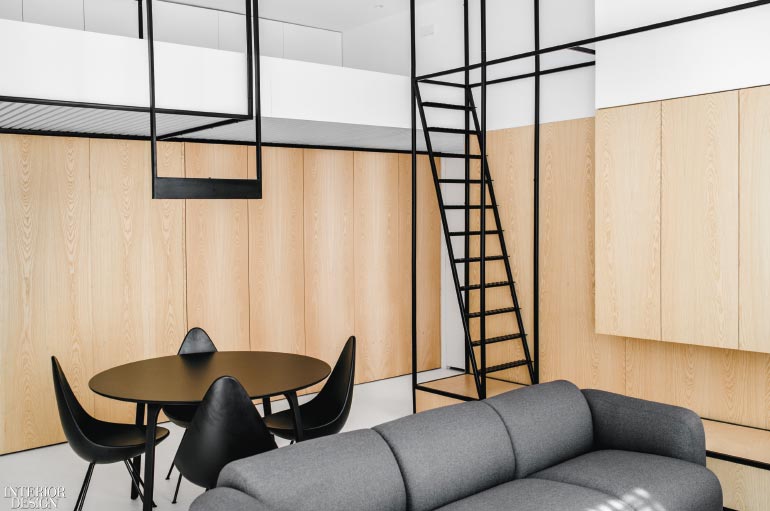 MUS stands for “made-up space,” a tidy synonym for the art of architecture. And it’s an apt descriptor for the firm’s recently completed pied-à-terre in Kraków, where black-painted steel frames demarcate rooms. Though the apartment, designed for a Netherlands-based businessman and his family, was just 495 square feet, it boasted surprisingly high ceilings. That gave cofounders Anna Porebska and Adam Zwierzynski the opportunity to insert a mezzanine sleeping loft inspired by the 3-D line drawings of wireframe computer modeling. Read more

7. Messana O'Rorke Updates an Apartment in a Former NYC Synagogue 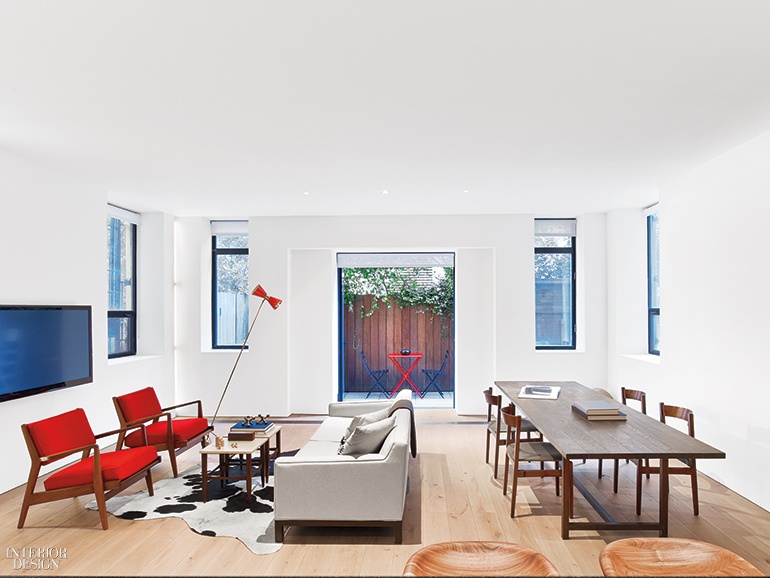 After a decade of living in the garden-level apartment of a converted East Village synagogue, the time had come for an upgrade. The garden apartment’s owners love to entertain. So they asked for an inviting public space with an efficient kitchen, plus a master suite with a spalike bathroom. Messana O’Rorke responded by dividing the 1,100 square feet in half, placing the single bedroom near the front door and the living and dining areas at the garden end. Read more 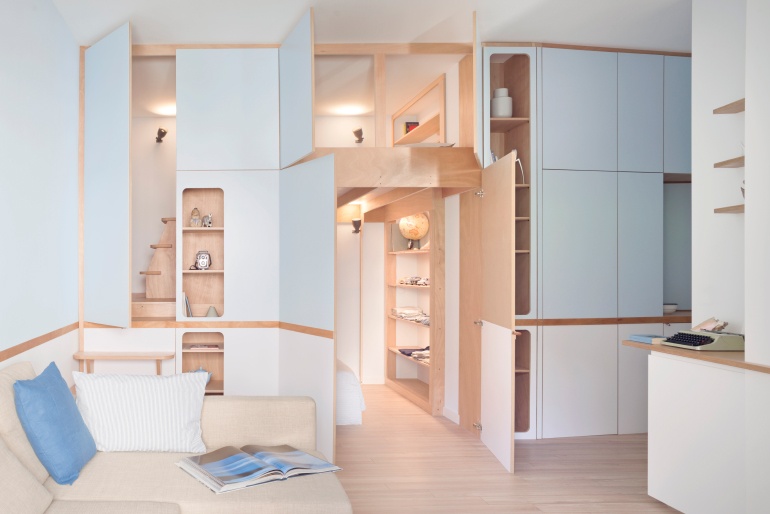 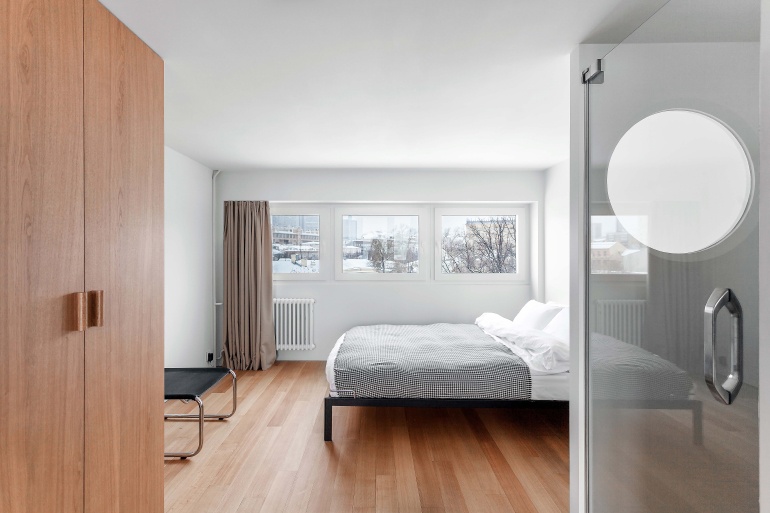 10. Atsumasa Tamura Design Office Creates a Work of Art for All Seasons 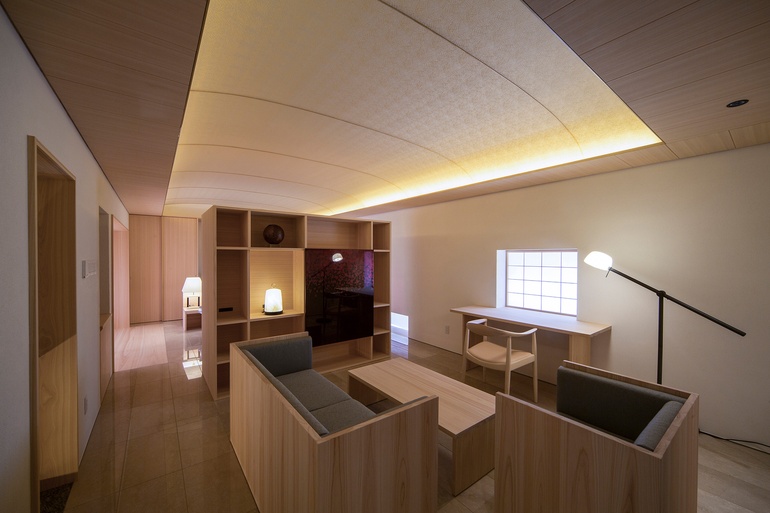 Some art collectors clear off a wall for a new favorite. Some empty a room to display it. Neither option was enough for the client of Atsumasa Tamura Design Office: He renovated an entire 750-square-foot house in Wakayama City so that he could admire Hiroshi Senju’s “Yozakura Gekka.” Hans Wegner’s PP503 chair sits at a custom desk in the living room’s study area, with custom furniture made of hinoki. Read more 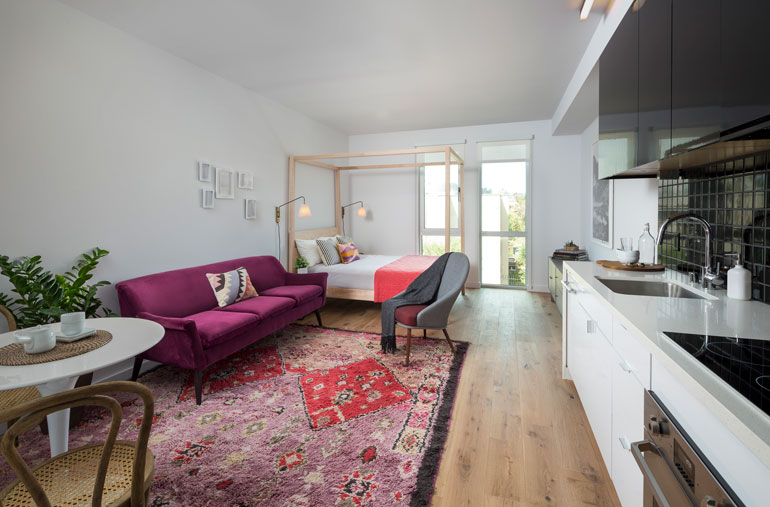 All architects are influenced by other buildings, including their own. For a San Francisco building, 388 Fulton, David Baker Architects didn’t have far to look for inspiration. Just across the street stands their Richardson Apartments, studio housing for homeless residents. 388 Fulton has the first market-rate micro-units in the city, providing “affordability by design,” with built-in storage beds that maximize space. Read more

12. Sophie Dries Mixes Elements for a Paris Apartment in a 17th-Century Building 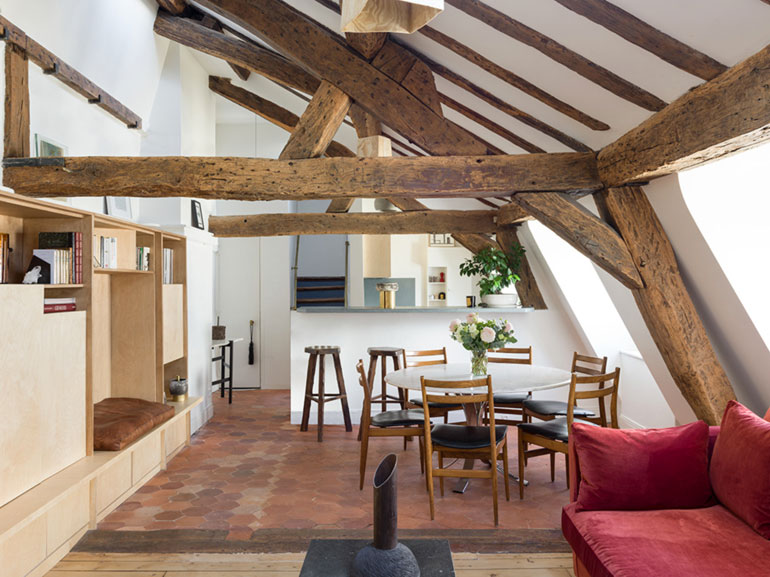 13. Sim-Plex Design Studio Crafts a Hong Kong Apartment for Humans and Their Pets 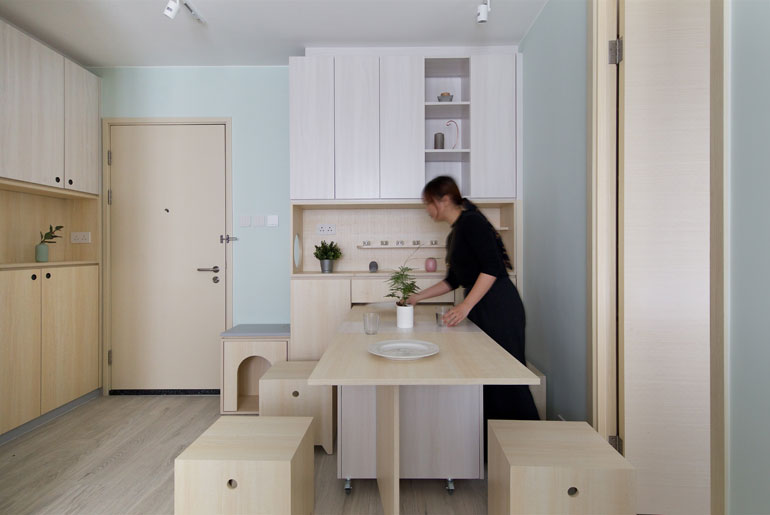 Patrick Lam needed to accommodate the differing needs of two generations and three species when he designed a 450-square-foot apartment in Hong Kong. But Lam, founder of Sim-Plex Design Studio, was not daunted, creating a comfortable and flexible space for a young couple, a parent, a parrot, and a cat. The humans needed ample storage space, room to maneuver, and areas that could become communal. A dining table is stowed within a custom cabinet, pulled out only when needed. Read more

14. U-Labprojekte Elevates Multigenerational Living With a Pied-à-Terre in Madrid 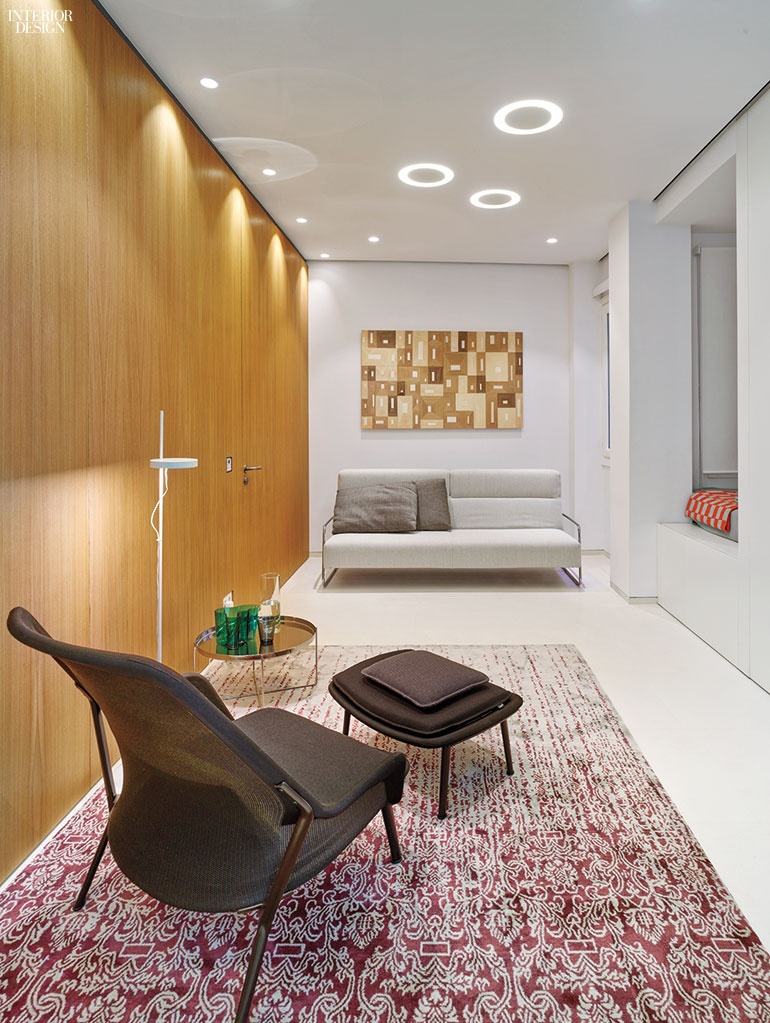 Walking along Madrid's prominent, tree-dotted boulevard Calle de Serrano, one will find old-school grandeur. However, the occasional minimalist facade does turn up. This kind of contrast between old and new happens inside the neighborhood’s residential buildings, too. One such example is an apartment by U-Labprojekte, a small, forward-thinking studio fond of manipulating simple materials to profound effect. Pictured here, the sleeping wing contains a den with en suite bathroom that can become a bedroom when a guest visits. Read more 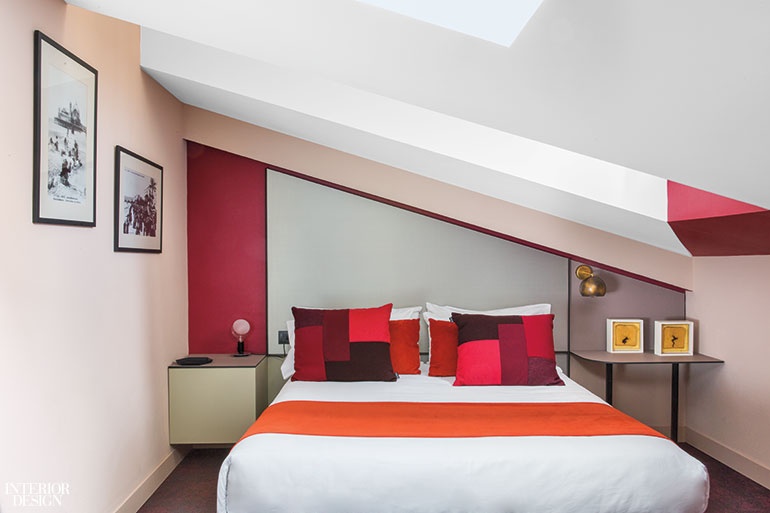 SCEG Architects’s conceptual starting point for this project draws from the founder’s origins: xeno-dochio, Greek for a box that contains travelers, otherwise known as a hotel. The architects’ interpretation centers on a narrative of geometric shapes appearing throughout the 6,000-square-foot, four-story property. Boxy daybeds, round mirrors, and triangulated brass wardrobes furnish the 19 guest rooms, each one unique. Read more