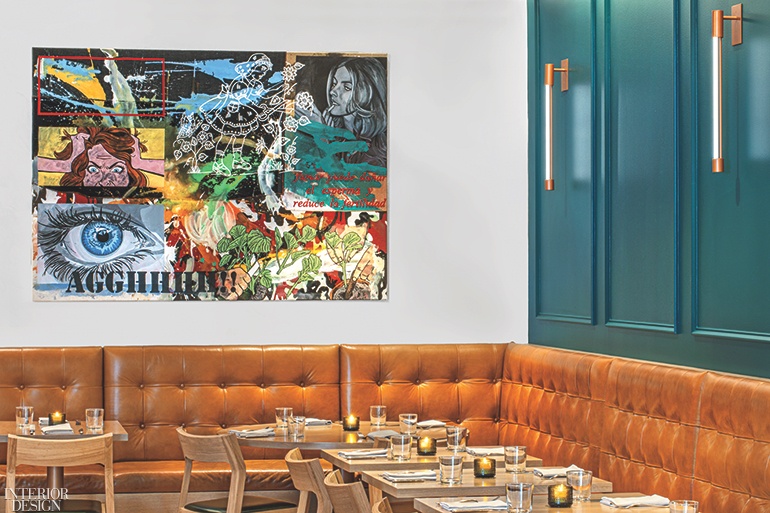 Once ubiquitous, Chicago’s corner bars have closed up shop in ever growing numbers lately. But Schubas Tavern, a live music venue housed in a neo-Gothic landmark, is more relevant than ever, hosting sold-out shows nearly seven nights per week. And that’s just the recent history. The building was constructed in 1903 by the Jos. Schlitz Brewing Co. as a “tied house,” a British term for brewery-owned pubs that pushed their own beer. In fact, the orange brick facade of Schubas still features the Schlitz logo—a globe wrapped in a sash—in terra-cotta bas-relief.

Schubas is now owned by the Audiotree Group, which also operates a music festival in Kalamazoo, Michigan. It was Audiotree COO and co-founder Adam Thurston and president Michael Johnston who saw the potential in opening a more upscale sister restaurant for Schubas. “There are a lot of crossovers between music and food,” Thurston says. “Chefs are like rock stars these days.” So Audiotree bought and demolished the diner and parking lot next door, then hired Gensler to build on the site.

The new structure’s basement would include a luxurious green room for talent, something that Schubas lacked. Thurston and Johnston made it clear, however, that Schubas itself was off-limits. “It felt like we were treading on sacred territory, this be­loved place where people have memories of seeing concerts,” Gensler managing director and principal Todd Heiser explains.

A notion that locales can become more vital, over time, was central to Heiser and principal Eric Gannon’s design of the build­ing for Tied House. At 12,000 square feet, it’s larger than Schubas, but both use orange brick. “Honesty of materials—it’s certainly a Chicago story,” Heiser says. On the upper level of Tied House, window walls are partially concealed behind a brick screen laid out in an X pattern, a nod to the brickwork next door. “In the architecture, you see a series of X shapes that play off each other, and there’s the positive-negative relationship of the brick,” he says. “It all works together.” On the ground level, Schubas has arched windows, whereas Tied House’s floor-to-ceiling glass is more open to the street.

Inspired in part by Chicago’s motto, Urbs en Horto, meaning city in a garden, Heiser and Gannon left space for an intimate courtyard between the street-front sections of the two buildings. Inviting people to gather, a massive copper outdoor fireplace is already starting to patina. Like the copper cornices next door, the fireplace will just get more beautiful over time. “The idea was to give Schubas a little pocket park,” Heiser says.
“In the summer, you can come early for a drink or dinner and then stay for a show.”
When the weather allows, Tied House’s sliding glass doors stack away, opening the bar area completely to the courtyard.

Although the bar proper is purposely similar in size and shape to the antique wooden bar at Schubas, the new one is Calacatta gold marble, selected for both its heft and gold veining. “The bar grounds the space, and the marble speaks to the quality and service,” Gannon says, adding that the bar is one of two big moves on the ground level. The other
is a tufted leather-upholstered banquette that wraps a corner of the dining area, absorbing sound and complementing the dark-green painted paneling on one wall and the Venetian plaster on the other. Oversize molded panels cover much of the ceiling, a response to the tin ceiling at Schubas. “This is a very clean-lined, contemporary project, but there are nuances in the detailing,” Heiser says. “We took trad­itional references and blew them up.”

Compared to the natural lightness and brightness during the summer, the winter experience is much cozier, with candles on every table, copper sconces with slender LED tubes, and indirect lighting from concealed LEDs. Light also bounces off gilt-framed mirrored canopies suspended just below the ceiling. The one over the bar allows drinkers to watch the mixologists, crafting cocktails, from an unexpected perspective. “Almost like a chef’s table,” Heiser says.

References to the past are more mid-century modern in the upstairs space for private events. The furniture, scavenged from thrift stores, can be easily moved into different configurations depending on what’s taking place. During one of the shopping excursions for the project, the design team visited stores selling used stereo equipment and ulti­mately bought a lot of nonfunctional speakers. Now grouped beneath the top of the table-height bar, they’re visible behind mesh punctuated by the Tied House logo in neon.

“We did all the brand work,” Gannon notes. “We were very thoughtful about how to tie that string all the way through.” All in all, the blend of contemporary innovation with historical call-backs strikes just the right note.