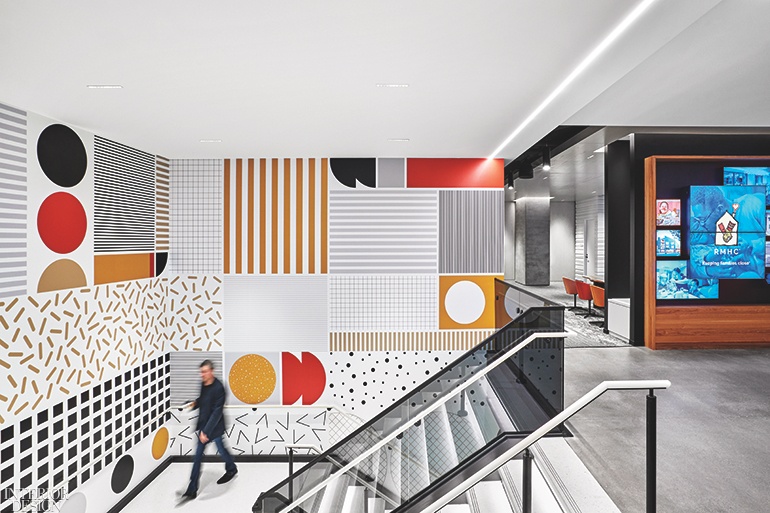 Almost 50 percent of the workplace is devoted to amenities. Office areas are open-plan, choice-enabled, and activity-based. All 2,400 employees are equipped with the necessary mobility tools to work almost anywhere in the 480,000-square-foot facility—from dinerlike booths tucked in corridors to a verdant roof deck. Areas around the M.C. Escher–inspired terrazzo staircase that staggers up the four-story central atrium are ground zero for impromptu hangouts and on-the-fly ideating. Wi-Fi and connectivity in the nine-story building are so robust you can dial into a conference call on your cell phone while exiting your car in the below-ground garage, hop on an elevator, and then join the meeting in the eighth-floor boardroom without dropping the call along the way. Visitors check in not with a receptionist but a tablet-wielding greeter à la the Apple Store.

What sounds (and looks) like the paradigm-shifting headquarters of a venture-funded Silicon Valley startup is in fact the home of an iconic Fortune 500 corporation founded in the 1950s, the kind of company you’d envision rooted in some cubicle-centric suburban campus. Which in fact describes McDonald’s former Oak Brook, Illinois, HQ to a T. The story of why the global burger giant decamped to Chicago’s West Loop—the formerly fringe-y neighborhood that’s now a burgeoning tech hub and fine-dining epicenter—is a classic American tale of reinvention. The new office is just the latest phase of a top-to-bottom corporate culture shift the fast-food entity set in motion four years ago, when Steve Easterbrook was appointed president and CEO.

IA Interior Architects, which had been tapped years ago to consult on the company’s Oak Brook campus master plan, was hired again—this time to help with the real-estate search and an extensive workplace strategy initiative. The latter process netted three key objectives: “To connect work and people, foster and showcase innovation, and create a sustainable, flexible, and evolving workplace that would respond to changing needs,” McDonald’s director of corporate real estate Scott Phillips recalls. The client’s gung-ho embrace of internal mobility sparked a chain reaction that would ultimately impact everything from employee onboarding to technology infrastructure. “That drastically changed how the building was selected and ultimately designed,” IA principal and design director Neil Schneider begins.

The winner of the six-month site search was a not-yet-built structure slated to replace Oprah Winfrey’s former studio. The block-wide edifice, designed by Gensler, had the right vibe and enough square footage that McDonald’s could be the sole tenant—giving it the leverage to weigh in on the base building design. “The ability to modify the structure to match the design intent was something we couldn’t have achieved elsewhere,” Schneider notes. “McDonald’s wanted an industrial, exposed-concrete look,” he continues. “But the space also needed to perform.”

The only catch was having to complete the ground-up project within the client’s aggressive 18-month timeline. Pulling off the impossible entailed piloting a novel construction method to simultaneously build up while excavating down. “Every team member brought their most cutting-edge solutions to the table,” says IA senior associate Ruben Gonzalez, the project’s senior job captain. Including Studio O+A, who collaborated with IA on the interior design and oversaw environmental graphics. “We weren’t going to get any give in that schedule!” O+A co-founder and principal and Interior Design Hall of Fame member Primo Orpilla says with a laugh. He and design director Elizabeth Vereker had just 13 months to dream up and fabricate branded art moments to vivify every floor and outfit the copious ancillary zones. “We created lots of little nooks and crannies, from engaged shelters and soft seating in hallways to long arrays of sofas,” he adds.

One such seating-scape—an enfilade of Patricia Urquiola’s Tufty-Times—commandeers the main lobby, which has a view to the second-floor kitchens, where executive chefs cook up menu innovations. (Workplace strategy extended to the culinary spaces, designed to catalyze collaboration.) Sofa sitters can also marvel at sculptor Jessica Stockholder’s vortex of cooking utensils and equipment patented by McDonald’s employees. “That beautiful volume was begging to be filled with art,” Vereker says. “We wrote briefs for how artworks could tell the McDonald’s story and tie into the broader design concepts.” The brief for Jacob Hashimoto’s acrylic-disk waterfall filling the atrium: innovation through scale (think billions served).

The piece summarizes the tone of other spatial graphics, which range from a display showcasing decades of Happy Meal toys to fries-motif frit glass on workstations. “In a desire to pivot to new thinking, the client initially said, ‘Don’t look back!’” Orpilla says. “But the more we dug into the company archives and history, the more we understood the value of revisiting their past.” Vereker adds, “So the challenge was how to look ahead and back simultaneously.”

Now, it’s all about forward momentum. Just eight months post move-in, recruitment is already up 22 percent. But metrics aren’t necessary to gauge the project’s success. “In the old space, employees were sequestered,” Vereker notes, “they didn’t meander. Here, it’s buzzing like a college campus.” Phillips concurs: “We’ve seen a great adoption of the public spaces.” You might even catch sight of the CEO talking with colleagues in the café, modelling how high-level innovation happens.

This project was the winner of not one but two Best of Year awards in 2018, for Environmental Branding/Graphics and Extra-Large Office.

> See more from the February 2019 issue of Interior Design