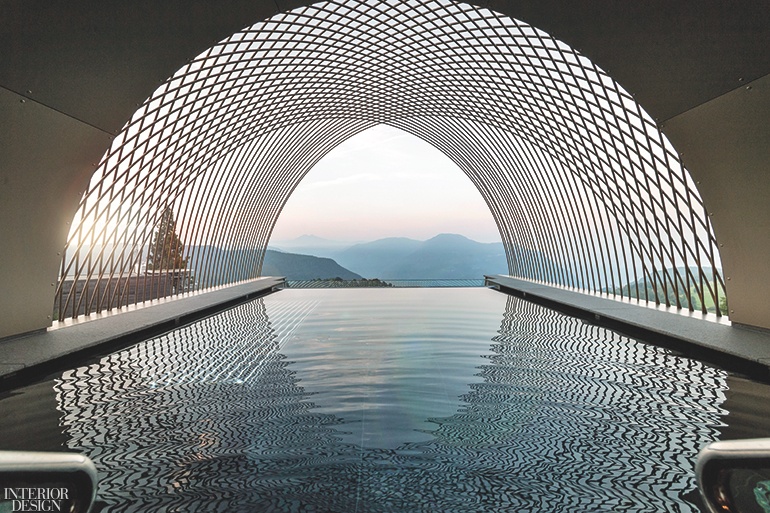 For centuries, residents of the northern Italian city of Bolzano have sought refuge from the summer heat by retreating to the Dolomites. The construction of a cog railway in 1907 gave ready access to the nearby Alpine village of Soprabolzano, where members of Bolzano’s upper crust established warm-weather estates. In their gardens they built gloriettes, small guest houses, one of the most known being the 18th-century pavilion on the grounds of Vienna’s Schönbrunn Palace. That arcaded belvedere, along with its local descendants and the villas they serve, many in the art nouveau style, informed the design of Gloriette Guesthouse, a new 25-room boutique hotel by NOA* Network of Architecture that reinterprets Soprabolzano’s leisured past for the 21st century.

Naturally, NOA founder Lukas Rungger begins all his and co-founding partner Stefan Rier’s projects with consideration of site and context. But stringent municipal regulations heavily influenced Gloriette’s size, form, and materials. “I took them not as limitations, but as inspirations,” says Rungger, who demolished the sloping property’s existing hotel and replaced it with a compact six-story building. One of its facades reads as three stories topped by a mansard roof; on another, the land falls away to reveal an additional  story housing seven suites, each with a private terrace opening onto the garden. Overall square footage is 21,500 square feet.

The neoclassical arches of Vienna’s Gloriette are echoed in the sinuous curves and rounded windows of Soprabolzano’s art nouveau buildings. Respecting that tradition, Rungger has made the semicircular arch a defining architectural element of this hotel, inside and out. “New building techniques allowed us to twist and mirror the form,” the architect says, referring to its most prominent exterior use: a rooftop infinity pool that cantilevers 7 feet from the mansard roof, making it visible from the hotel grounds and further away. A massive horizontal half-cylinder, whose inverted “U” cross-section Rungger likens to a smile, the aerial structure is clad in bronzed panels and, above the pool, sports a canopy of crisscrossing aluminum rods that casts geometric patterns on the surface of the water.

Entry to the pool is via sliding glass doors set in a large cylindrical portal reminiscent of an airlock on a space station. Accessed by a monumental resin platform, it’s a sleek, sculptural object that dominates one end of the top-floor spa, defining the atticlike volume as strongly as the angles of the mansard roof overhead.

“The spa is organized as one floating space surrounded by more intimate niches,” Rungger explains, acknowledging the need to create moments of enclosure in the face of the omni­present mountain views. Custom beds, for example, are pushed against low peripheral walls paneled in herringbone oak that serve as anchoring headboards, and upholstery-padded alcoves are outfitted with mattresses on oak platforms, like a luxury take on a mountain grotto. The spa’s more private spaces include a steam bath and a sauna.

Rungger weaves the arch form into the six additional suites and 12 guest rooms occupying the three floors below the spa. All have a balcony framed by a semicircular arch in the hotel’s facade. In some rooms, the inverted “U” reappears as a sort of partition between the sleeping area and the bathroom. On the bathroom side, it’s mirrored and set above the vanity and sink.

“Rungger has made the arch a defining architectural element of this hotel, inside and out.”

Beds, desks, built-ins, and paneling are all in European oak. Wood is an essential part of the regional vernacular, after all, but the architect was sure the interiors didn’t read as what he calls “Alpine rustic.” So, wherever the material appears, it’s silky smooth with knots and imperfections minimized. “We used a lot of timber, but with clean lines and surfaces,” Rungger explains.

In a nod to the geometric forms mixed in with the curves and arches, Rungger has given some suites cuboid bays that project  from the hotel’s facade. Fitted with arched windows and built-in daybeds, these nooks feature walls and ceilings upholstered in cot­ton in a deep blue, a reference to the signature color at the client’s restaurant, Vögele, in Bolzano. Each suite’s lounge area is furnished with comfortable sofas, adding to the sense of warmth and welcome; one, appropriately named the Chimney suite, has an enormous blackened-steel fireplace.

Arched and rounded elements repeat on the ground floor, where reception and the lounge, restaurant, and bar areas are located. “There’s not a single door,” Rungger notes of the mostly open plan. The fireplace near the entry is circular, while the shiny black bar is a semicircle. Extra-wide arched windows give access to the dining terrace. Angularity figures in through some of the lighting, particularly the bronzed pendant fixtures that bend out and down­ward, like peaks of a mountain.

These areas are peppered with salvaged treasures, antique cupboards and tables from the previous hotel that Rungger refinished and mixed with new furnishings. That touch is representative of the way he blends past with present to create a contemporary environment—an effect he calls “a journey through time.”