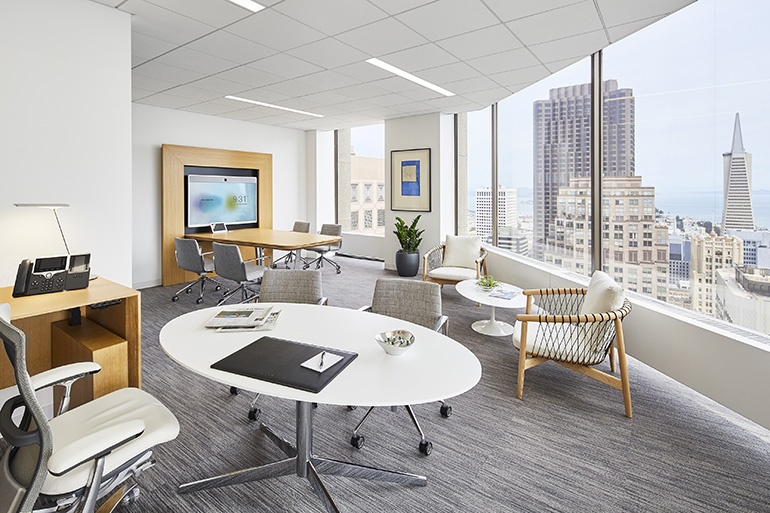 McKesson, the largest U.S. distributor of pharmaceuticals and a Fortune 500 habitué, held prime San Francisco real estate as its headquarters. At Market and Post Streets mid-downtown, the office encompassed 25 floors of a 1969 tower by Welton Becket & Associates. Unfortunately, much of the workforce were unable to profit from the main asset. Picture-perfect views of the Golden Gate and Bay bridges were obscured due to walled-off planning and dark corridors. Huntsman Architectural Group changed all that.

Downsizing and consolidation entailed reducing “from 1,600 to 800 desks, and down to eight floors. We moved half of the staff to Los Colinas, Texas,” reports Huntsman principal David Meckley. “Even so, we increased the density on floors by 50 percent.” No worries, though. Any sense of overcrowding is nil. Credit goes to a change from private offices to bench desking on six of the floors. Enclosed offices occupy the remaining two, accorded executive status. Break areas, previously hidden at the core, are now easy to find amid a landscape of perimeter flex and confab spaces. Light and views are open to all, from anywhere.

Speaking of light, Huntsman took a delicate approach with materials and colors. Among the former are birch and creamy marble. The latter, starring the corporate blue, incorporates palettes built on “a different aspect of the Bay Area—the sea, beach, hills, and sky,” Meckley explains. Furnishings are undeniably contemporary. Sui generis, however, is a break room’s custom bench, a repurposed conveyor belt hinting at McKesson’s core business. Which brings us to the fact that the premises are going for Well Building certification as well as LEED Gold.