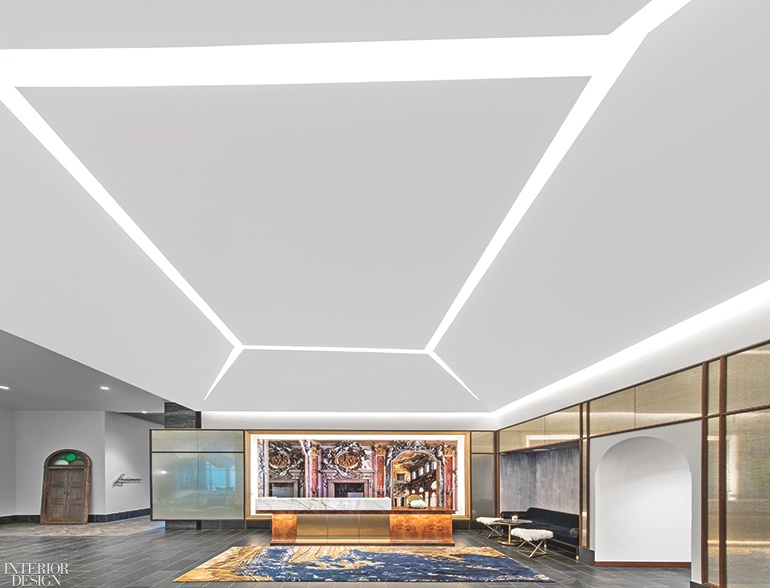 Rottet Studio has designed hotels all over: New York, Chicago, Miami Beach, Las Vegas, and Bogotá, Colombia, plus the Viking Star cruise ship. But none in Houston, where Lauren Rottet’s roots run deep—her firm has been headquartered there for more than a decade. None, that is, until now. Hotel Alessandra, a 21-story ground-up property done in collaboration with Gensler, is the Interior Design Hall of Fame member’s hospitality debut in the city.

“We love to tell stories,” Christopher Evans begins. He and Anja Majkic, both associate principals, led the project with Rottet. Part the stuff of novels, part reality-based, the plot line goes like this. Alessandra is conceived as a woman, an old-world European sophisticate, the older of two sisters who comes to freewheeling Houston from Spain with her dowry and falls in love with an oil man. (The younger sister is alluded to at the Hotel Sorella, another Houston property operated by the same developer client, Valencia Group. The company’s vice president of branding and design Brandi Montgomery loves stories, too.)

Typical of Rottet, the project evolved as a hybrid: traditional glamour paired with contemporary implementation—fitting for a locale that’s home to such cultural institutions as the Rothko Chapel and the Menil Collection. In fact, Alessandra could be a doppelgänger for Dominique de Menil, who brought a level of art and culture to the Texan city. Rottet herself even characterizes Houston as simultaneously rough and polished, “like crude oil and yellow diamonds, gardenias and tobacco,” she notes.

Narrative aside, the 188,000-square-foot hotel immediately departs from the norm. The entry is merely that, a drop-off for bellman and valet. (City regulation mandated  a percentage of the narrow area be allotted to retail, but that’s still speculative.) Social spaces, including reception, are one flight up. “So we had to create a vertical pull, architecturally,” Majkic states. Ergo the grand stairway of creamy Brazilian marble and gleaming bronze handrails capped by a stunning cast-plaster vaulted ceiling. To assure guests would make the passage, “We even hid the elevator,” she continues. But sharp-eyed visitors appreciating the décor’s unusual art objets can find it tucked behind the stairway, next to one of two centuries-old French stained-glass doors.

Another ceiling treatment defines the reception area, it too filled with artwork eye candy. Here it’s coffered, the slots of its knife-edged planes illuminated. “We were looking to recall an arcade of the past without trying to literally re-create one,” Evans explains, “not fake people out.” Rottet adds, “These treatments are like sculpting, making the interiors feel old world. But on second glance, you see that there’s actually not a single old-world or traditional detail.”

The space glows golden thanks to its panels of laminated glass sandwiching bronzed mirror and copper-textured fabric. Central is the check-in desk in brass, myrtle burl, and veined white marble. Some seating, sofas upholstered in navy mohair, is semi-concealed in niches. A symmetrical setting of armchairs and loveseats, cozily arranged below the truncated ceiling vaults, is more open. Dare we mention that the swirling blue-gold rug reminds us of an oil spill? “Absolutely,” Rottet laughs of the pattern derived from a photograph and interpreted in shimmering silk and wool. An actual photograph, enormous and installed behind the desk, is by Reinhard Görner, chosen, Rottet says, “because it’s so immersive.”

Nearby is Bardot, the cocktail lounge. It’s an intimate enclave anchored by a brass and walnut bar, its top a reflective resin reminiscent again of oil, this time a black-crude variety. “I channeled the Viennese café culture for the restaurant,” Evans says of the neighboring Lucienne. A ceiling vault bifurcates the long, narrow space, where banquettes line the walls and four-tops run down the center. The half-height window treatments look like traditional toile de Jouy from afar. Upon closer inspection, however, the fabric is a playful contemporary version with images of landmarks and people snapping selfies. Green is dominant here—chairs and some upholstery are a minty-seafoam. “Houston is a lush city, so we used the color throughout,” Evans adds.

Guest accommodations begin on the fifth floor, also home to the fitness center, spa, and pool deck (conference and service facilities are on floors three and four). “Everything’s bigger in this state,” Rottet says of the 218 guest rooms, “but these are still intimate in scale.” Depending on their positioning, mirrored bifold doors make the bedroom or the bathroom appear larger. Otherwise,  common elements throughout include an oak-framed headboard, a corner sofa, and contemporary photography. But no clever mirror usage is needed to amplify the hotel’s five suites. Offering a large terrace off the bedroom, a dining room that seats eight, and 1,600 square feet, the presidential suite is truly Texas-size.