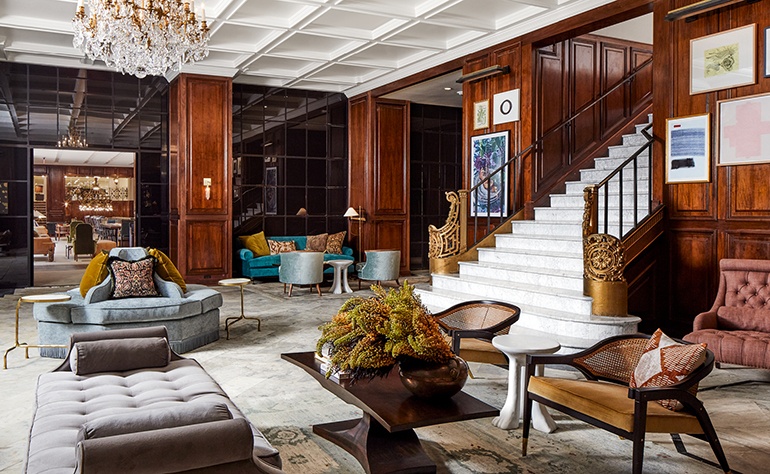 In 1912, Adolphus Busch built Dallas’s first grand hotel. A century later, The Adolphus Hotel’s Beaux Arts grandeur and Germanic exterior still charmed, but some refreshment was in order. While Swoon, the Studio didn’t have Busch’s Texas-sized budget—$2 million, or more than $52 million in today’s dollars—it had similarly big ambitions, tackling each communal space with an eye to modernize all the decadence without diminishing Busch’s achievements.

The idea was to restore the former glories, but with some restraint. Swoon’s founder Samantha Sano and partner Joslyn Taylor employed a Francophile color palette, all butter yellow and deep blues and dark wood, across walls and upholstery for unfussy furnishings. Careful touches of gold leaf and custom rugs only accentuate true gems, such as a 100-year-old marble floor Swoon uncovered during demolition.

And new gems were installed. “We’re deeply in love with the dual antique fireplaces we had imported and reconstructed in the lobby,” Taylor says, creating the perfect spot in winter to contemplate the passage of time.