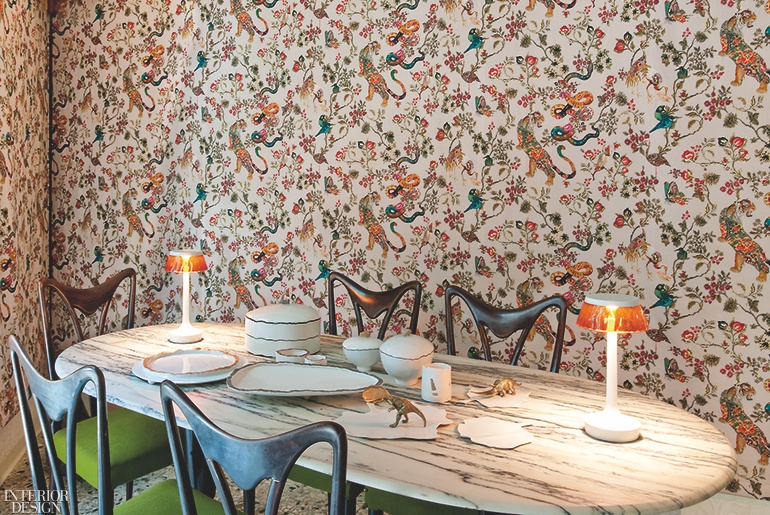 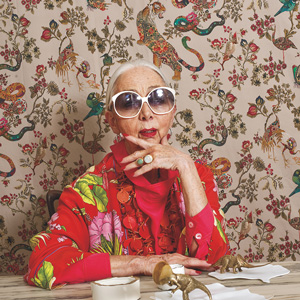 Galleria Rossana Orlandi is a mandatory Milan stop for design aficionados. The namesake owner opened the gallery and shop in 2002, inside a former tie factory on one of the city’s quiet residential streets. Through a series of refreshingly un-museumlike exhibitions mounted in the stylishly gritty, 19,000-square-foot space, most notably during the Salone Internazionale del Mobile, she gave early exposure to such international stars as Nacho Carbonell, Piet Hein Eek, Formafantasma, and Jaime Hayon. The three-story emporium encourages visitors to linger: They can wander through its labyrinthine rooms, sit in the greenery-filled courtyard, and even have dinner at Aimo e Nadia BistRo, Orlandi’s restaurant located next door.

BistRo opened in 2018, replacing Marta, which was designed in 2015 by Orlandi’s good friend, Interior Design Hall of Fame member Paola Navone. Where Marta’s look echoed that of the gallery complex in general—chockablock with a mix of objects, vintage and new—the new restaurant, for which Orlandi recruited the help of Fabio Pisani and Alessandro Negrini, the chefs at the Milan culinary mecca Luogo di Aimo e Nadia, feels plush and glamorous. “From shabby chic I went very luxurious, to make people feel coddled,” Orlandi explains.

The restaurant is also a shoppable showcase of work by the designers, both established and emerging, that Orlandi displays and sells. Hayon’s Beetley seating, for example, appears throughout. A downstairs room houses chairs by Hein Eek and a rug by Kiki van Eijk. One of Jacopo Foggini’s methacrylate chandeliers, in a custom purple, hangs back upstairs, in a dining room. Nearby, younger designers are represented in McCollin Bryan, the London-based duo consisting of Don McCollin and Maureen Bryan; their sizeable brass wall piece installed above a banquette is reminiscent of utensils. A wood and ceramic pendant fixture by Andrea Zambelli and Nat Wilms of Hillsideout, a Berlin studio that often combines antique and new components, hangs in a corner of this room, near a round mirror by Jorge Penadés, a Spanish designer whose work Orlandi happened upon in Prague. Works by French artist Aurélie Mathigot, who combines photography with embroidery, are also here and in the women’s restroom. A framed “portable window” video by Anotherview, whose co-founder Marco Tabasso was formerly Orlandi’s right-hand man, hangs in the bar area.

Orlandi’s design partner in the restaurant was Etro Home, the residential branch of the storied textile and fashion house. Orlandi worked with creative director Jacopo Etro to create custom adaptations of fashion textiles for the eatery’s upholstery and wallpaper, in particular a feminine tiger print surrounding another dining room. The cumulative effect that Orlandi sought was that of “walking into a dress,” she notes, “but with fabulous food.”

In working with Etro, Orlandi returned to her roots. After graduating from the Istituto Marangoni, where she studied textiles, she spent 20 years working as a consultant to her family’s business, which produced yarns for such fashion giants as Giorgio Armani, Gianni Versace, and Issey Miyake. And she’s a bit of a fashion icon herself: The oversize white-framed sunglasses she wears are her signature. But Orlandi always had her eye on design. “I like the design world much better than the fashion world,” she states.

Orlandi often finds her designers at universities and their juries. She discovered Formafantasma, for instance, when she saw their degree show at the Design Academy Eindhoven. And that’s where she recently encountered the work of Guglielmo Poletti, whose spare, sculptural furniture is, she says, “about equilibrium.” And Orlandi keeps looking, taking the occasional time-out to indulge her secret vice: playing Italian card games on her iPad.

Another Eindhoven gem is the Dutch designer Dirk Vander Kooij, who caught Orlandi’s attention with his 2010 Endless chair, made robotically out of a single string of plastic recycled from old refrigerators. In fact, sustainability is a topic close to Orlandi’s heart. She’s even inaugurated an awards program with categories for design, limited-edition art, textiles, and packaging made of recycled or recyclable plastic. “We must try to transform all the plastic in the world,” she proclaims. “All of us can contribute to the solution.” If anyone can find new designers with solutions of their own, it’s Orlandi.