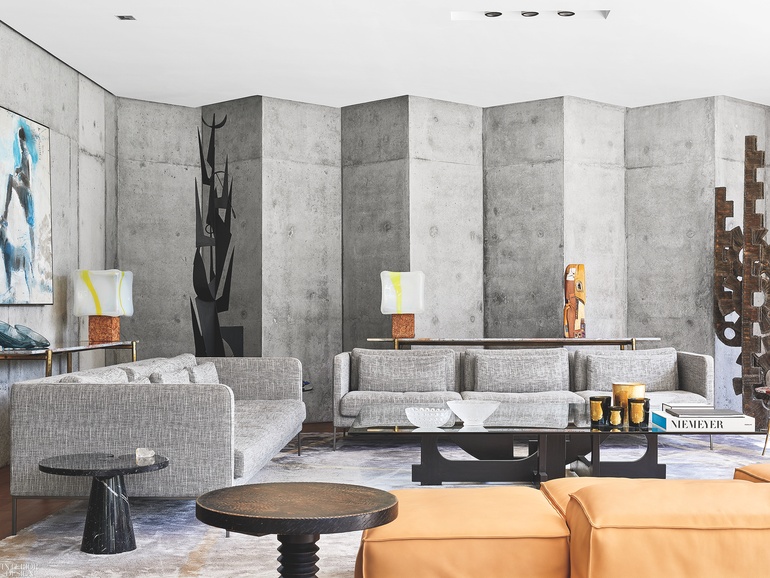 When the French took control of the Moroccan port of Casablanca a century ago, they set about transforming it into a showcase of colonial power. The city they left to an independent Morocco in 1955 was not only the country’s largest but also its most modern, a well-planned metropolis with an array of distinguished 20th-century architecture—a legacy that Casablanca’s designers have continued to build on. “Today, the houses are very minimalistic—white boxes with holes cut out of them,” architect Mohammed Kabbaj says of his hometown’s dominant residential style, which grew out of Le Corbusier’s early, machines-for-living aesthetic, itself inspired by indigenous North African architectural forms. The principal of Mohammed Kabbaj Architects is influenced by Le Corbusier, too. But as a glance at the two-story villa he recently completed for his family, it is Corbu’s later brutalist phase (from béton brut, or rough concrete, the master’s favored material after World War II) that has affected Kabbaj more. “I was trying for something more sculptural, more personal than the typical modernist house,” he acknowledges.

“Brutalism was huge here in the ’60’s and ’70’s,” Kabbaj continues. “The large concrete buildings, where structure and raw materials are celebrated, had a big impact on me.” Along with Corbusier, the architects he most admires—Louis Kahn, John Lautner—all worked in that tradition. But perhaps his strongest influence was Jean-François Zevaco, a Casablanca-born French architect, often referred to as the Moroccan Oscar Niemeyer. “Zevaco designed an amazing house for my father in the ’70’s,” Kabbaj recalls. “Watching them collaborate is what first drew me to the profession.”

But Kabbaj grew up in a French 1940’s bungalow. The new 8,000-square-foot, four-bedroom house he designed sits on its exact  footprint. “I gave myself permission to tear down my childhood home as long as I replaced it with something better,” he states. He was also determined not to touch a single tree on the lushly planted corner lot, even creating a hole in the roof overhang so the branches of an enormous Ficus elastica he climbed as a boy need not be trimmed.

The abundant greenery helps soften the architecture, which is all post-tensioned concrete, including the multiangle roof. The material supports spans of up to 40 feet, so Kabbaj was able to create enormous window openings and as free-flowing a floor plan as he desired. “The whole house rests on only six columns, giving a feeling of lightness,” he reports. “The roof is one massive concrete sheet, folded origami style, giving my children the sensation of sleeping under the kind of pitched roof you’d find in an alpine cabin.”

He’s also provided his two daughters and son, ages 4 to 13, each with a large bedroom and en suite bathroom. “Today, kids sometimes stay at home into their late 20’s, so you have to design rooms for adults that are suitable for children and not the other way around,” he reasons. His son’s shower, which features a wall sheathed in colorful Brazilian marble, is particularly stunning. “I sometimes sneak in to use it myself.”

Another distinctive marble, this time from India, clads a partition flanking the main entry. “It’s the only piece of the old house left standing,” says Kabbaj, who gave it a concrete twin across the hall. Neither touches the ceiling, establishing a sense of both mass and weightlessness that’s found throughout.

Although Kabbaj was initially reluctant to work with an interior designer, he changed his mind after meeting Christophe Vialleton and Charles-Phillipe Mommeja, two Frenchmen who own Laboratoire Design. The three men share a passion for mixing contemporary furnishings with quirkier vintage and artisanal pieces. But Kabbaj didn’t see eye-to-eye with the designers on everything: “They hate the Mario Bellini leather chairs I insisted on keeping from the old house,” he says with a laugh. “My father has a set from the ’70’s, which have developed a patina I adore and look forward to seeing on mine.”

Perhaps it is the salon, the most formal space in the house, that best represents their sensibilities working in perfect synergy. “Moroccans constantly entertain on a large scale,” Kabbaj explains. “We reinterpreted the classic salon marocain, with its emphasis on seating, by giving it a mid-century modern vibe.” Jean-Marie Massaud’s sectional sofa, upholstered in pale-gray and Hermès-orange leather, are arranged in a wall-hugging U. On the wall hangs a graphic tapestry by Daniel Drouin, “which we saw in Paris, liked, and bought unresearched, only to learn later that he’s quite well-known,” Kabbaj reports. It’s joined by three mismatched vintage cocktail tables—in petrified wood, brass, and aluminum, respectively—also bought on Paris shopping expeditions. The softly patterned wool-and-silk rug and the light gently filtering through the foliage outside give the space a calm, underwater feeling. “It’s the most traditionally Moroccan room in the house, and I love it,” Kabbaj says with justified enthusiasm.