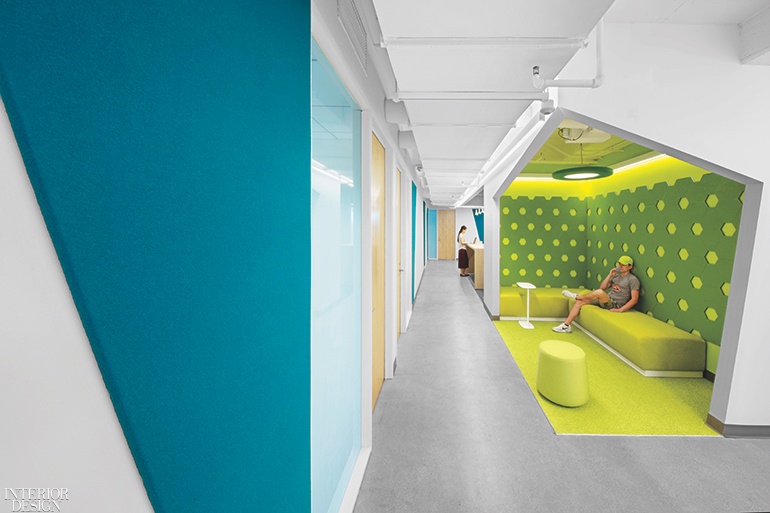 After two years spent at the venerable California Institute of Technology, with its world-class status in science, mathematics, and engineering, you’d think that Mike Goetz might have come away with, say, a deep understanding of some arcane theorem. Nope. Goetz is a senior designer at HOK, and his time on Caltech’s Pasadena campus was devoted not to academic pursuits but to renovating the home of the math and physics departments. And what did he learn? The importance of. . . chalk. Which requires lots of places to put it. That’s because, as he discovered, the entire faculty still writes with chalk, on blackboards, as a form of mind-body communication.

So chalk was factor number one in his design equation. Here’s another: history. The renovation involved a pair of conjoined structures, the earliest being a 1922 building by architect Bertram Grosvenor Goodhue. Originally known as the Sloan Lab, it was the first U.S. laboratory to have a million-volt power source. Then, in 1931, a wing called the Kellogg Building—three stories and two subterranean levels, like the Sloan Lab—was added to form an L. The last major renovation of Sloan Lab had occurred in 1959.

Many decades later, a drab scenario of classrooms with rows of tablet-arm seating and offices crammed with ad hoc accumulations of desks and chairs greeted Goetz. There had clearly been no furniture plan. “Yes, everything felt old and dated,” he recalls. “But I felt respect for the place and the knowledge that had passed through it. Generations of smart people had been sitting there.” He says he envisioned “a place where the coming generations could leave their own mark.”

HOK’s project entailed completely renovating the 1922 building’s three main levels, transforming part of the 1931 wing’s top level into an auditorium, and replacing all mechanicals, electricity, and plumbing. All told, it came to 27,000 square feet. An endowment from an alum trustee and his wife was the catalyst. Ergo the new name, the Ronald and Maxine Linde Hall of Mathematics and Physics.

Gutted to the slabs, then rebuilt, interiors boast private offices for the departments’ professors and postdoctoral candidates as well as shared offices for graduate students. Goetz’s planning intermingled these offices on every level of the 1922 building, alongside classrooms and conference rooms. But here the scheme departs from the norm, a response to input from the professors that he had interviewed. “They were thinking outside the box, looking to teach in different ways. They were the most receptive to new ideas of any client I’ve ever had,” he says. (Except, of course, for those chalk demands.)

Because the physical act of crossing an office threshold is inherently intimidating, suggesting a specific ask or mission, he provided plenty of spaces where faculty and students could meet serendipitously, without structure or intent. It starts just inside the entry, where lounge chairs in an eye-catching chartreuse gather in a circle near a chartreuse alcove—a hangout for all passers, not just official visitors. On two, a hallway widens to accommodate a seating niche wrapped in perforated felt in contrasting chartreuse and lime green.

The niche is on one side of the floor plate. On the other is that universal hub, a coffee bar. It’s accompanied by a break area’s round chairs, angular benches, and laptop tables, anchored by hexagonal carpet tiles. This may not be a hospitality project, per se, but it’s downright  hospitable. Likewise, up on three, a large events space is created when folding doors between a classroom and a lounge retract. The space furthermore benefits from a fortuitous find, revealed during demolition: striking steel trusses that crisscross beneath a 16-foot ceiling.

This is where speakers, faculty, and students mingle before or after major presentations—thereby bringing us to the 1931 wing. While the events space is part of the original building, the auditorium is in the wing, in a double-height volume formerly housing a helium tank, interestingly enough. At the juncture of the two structures, framing a wide portal between them, Goetz preserved details of the 1922 facade.

With pragmatic and historic aspects squared away, he added a touch of levity. That would be a pervasive program of graphics hinting at math nuances. For example, the entry’s floating ceiling is downlit to emphasize cutouts representing the transcendental number pi. Frosted film on glass walls alludes to geometric forms. One iteration, fronting a graduate-student office, is Caltech orange. Even a coffee bar references sine waves, via wall tiles. Given the profusion of pattern, the pops of color, and the prevailing openness, graduate-level math might not be so forbidding after all.