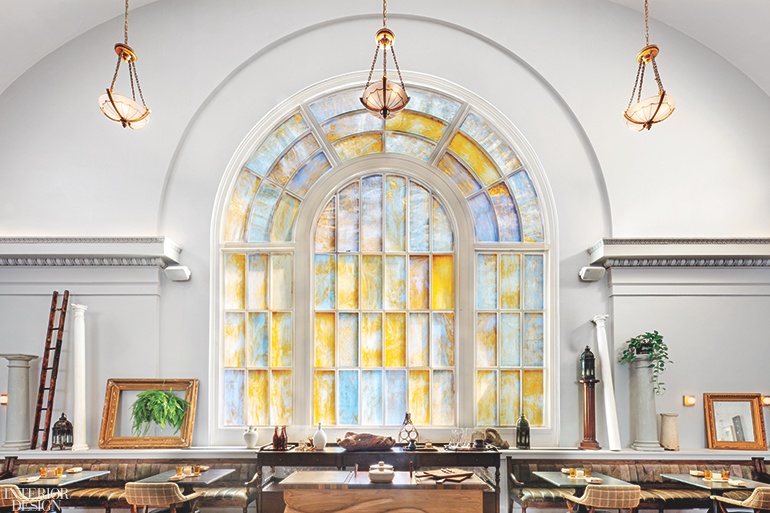 During the six years it took to transform a landmarked Washington church into a hotel, INC Architecture & Design went through a dozen concepts. The Line DC is the brainchild of hotelier Sydell Group, which counts such buzzy properties as the Nomad and the Freehand in New York, the Ned in London, and the Line LA among its portfolio. With the Line DC, however, Sydell founders Ron Burkle and Andrew Zobler were trying to hit upon the right formula to appeal to traditionalists, millennials, and globe-trotters. Perched on a corner site in the funky Adams Morgan neighborhood, the imposing Roman neoclassical building was built in 1911 by the First Church of Christ, Scientist, and is a striking example of the City Beautiful Movement. For INC, the elephant in the room was the main room itself: a 60-foot vaulted sanctuary with massive Diocletian stained-glass windows. While turning deconsecrated churches into commercial space is hardly cause for pearl-clutching these days, the grandeur of this particular nave made its ecclesiastical heritage impossible to ignore.

“Guys, like it or not, it is a church,” INC partner and field director Drew Stuart recalls stating at one point during the design process. “Instead of trying to cover it up, let’s honor that history and make it fun.” Something clicked. “We suddenly understood the narrative: The kids take over the church!” laughs Adam Rolston, copartner and managing and creative director. “It’s weird to think how long we took to accept the reality of the church.”

The architects proceeded to riff on the ecclesiastical theme, often with tongues firmly in cheeks. Dozens of the church’s original pews appear to have been partially dipped in pale pink or blue paint. Room numbers and other signage are displayed on authentic hymnal boards sourced from around the region. A tall gilt mirror sits askew on the original marble stair landing, as if abandoned by naughty Sunday schoolers.

However, before the fun could begin, the INC team had to reverse-engineer the sanctuary, which had been originally designed with stadium seating and a sloped floor to facilitate hearing a sermonizer at  the center. As this space would become the hotel’s future lobby and café, the opposite acoustics were required, something “less bouncy,” Stuart explains. So, the firm designed a structural steel system to level the floor and support a cloverleaf mezzanine, which would help temper the room’s scale and sound levels.

Since the M.O. of the Line properties—the third, in Austin, Texas, just opened— is “synthesizing site-specific design with dynamic culinary offerings to create an all-hours social hub for locals and travelers,” dining establishments weigh in significantly here. The mezzanine overhang creates an intimate space on the ground floor off the lobby for Brothers and Sisters, chef Erik Bruner-Yang’s all-day café. Upstairs, overlooking the lobby scene, is a Rake’s Progress, the more formal restaurant and bar created by chef Spike Gjerde and cocktail-master Corey Polyoka. The game-focused menu was inspired by the series of 18th-century Hogarth paintings that trace the downfall of a spendthrift heir of a rich merchant. The moral of the story might be lost on patrons caught up in politico-spotting (President and First Lady Barack and Michelle Obama have visited). That is, if they can take their eyes off the restored stained-glass windows flanking the space. The wispy white glass sparkles with shades of azure and gold, which bathe the room, and everyone in it, in a flattering glow.

The Rake’s open kitchen is tucked into a center vault, where the church’s pipe organ used to reside. As for the instrument, its brass pipes are now welded into a magnificent chandelier that hangs centrally from the vaulted ceiling. “We tried to give it away,” Stuart says, “but for the cost to de-install and reinstall an old organ, most churches would rather just buy a new one.”

Kids today, of course, cannot live without their tunes, and eclectic music effervesces throughout the hotel’s 130,000 square feet. Further, Full Service Radio, a community podcast network and internet radio station covering culture, food, and music, can be listened to 24/7 on guest-room TVs. Its source is a glass-box lounge near the entry.

Past the lobby’s reception desk, which naturally resembles a confessional, a gray-paneled hall connects to a new seven-story addition containing the 220 guest rooms and suites, plus 10,000 square feet of meeting and event space. In this wing, the church references are more subtle. End tables contain Gothic arches, and brass beds are sumptuous versions of iron bedsteads in the seminary dorm rooms of yore. Local touches come in the form of drawings and photographs by area artists. Even the vintage tomes on the oak desks are from the neighborhood’s Idle Time Books store. Although, some could be straight from the Church Lady’s personal bookshelf—sample title: Armchair in Hell.

Perhaps this is why Rolston, Stuart, and Gabriel Benroth, copartner and studio director, refer to themselves as a trinity. “Like brothers,” Rolsten notes, “we argue as much as we hug. It’s an unholy marriage that renders us whole.” And INC is keeping the divine theme going. An upcoming New York project, the Vandewater, a 32-story condominium building, is set to rise adjacent to the Jewish Theological Seminary.