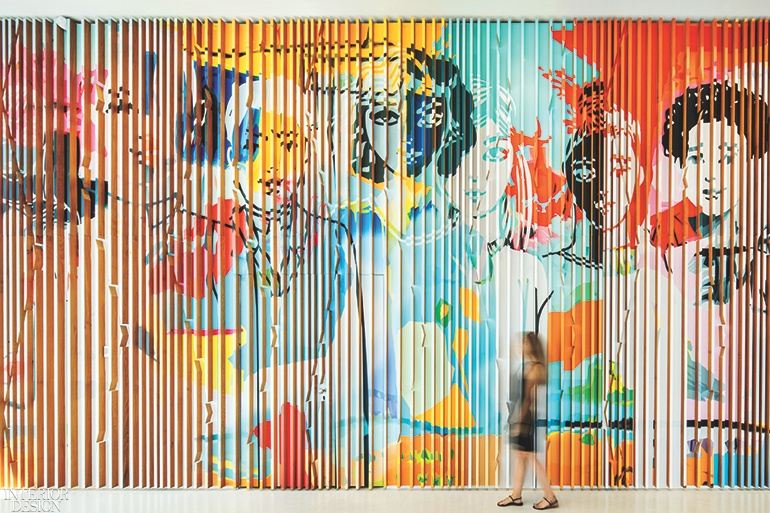 Bureaucracy is rarely this exuberant. Offering an eye-popping explosion of colors, patterns, and graphics, the headquarters of the Conseil Régional d’Ile-de France, the civil administration for Paris and its surrounding ring of seven départements, is a visual tour de force by Saguez & Partners.

Previously dispersed among 16 different locations in the city’s 7th arrondissement, the regional council and its 1,450 employees were recently consolidated into a vast new building in the nascent 250-acre development named Les Docks de Saint-Ouen, after its location in the small suburban commune famous for the sprawling flea market known as Le Marché aux Puces. Situated on former industrial terrain bordering the Seine, Les Docks is an eco­logically minded district containing residential and commercial ventures. In fact, the office of Saguez & Partners is located there.

This particular building, by Jacques Ferrier Architecture, was a “big white box,” Olivier Saguez says, when his firm took on the project in 2016: seven floors, each 40,000 square feet, laid out in a rectangle around a central garden. Saguez had been commissioned by the build­ing’s developer, Tishman Speyer, a U.S. company with a growing number of European properties. But when the regional council took a lease on the still unfinished structure, Saguez immediately got a call from council president Valérie Pécresse. She proved to be pivotal.

She pointed out that the council’s move was challenging in several ways. For the personnel, it was a profound social shift, from the chic core of historic Paris to a low-income community on the wrong side of the peripheral road. And one in total transformation, too, with a quarter of its territory a cacophony of cranes and construction sites. “The council was not only changing locations but also epochs,” Saguez says. “The old offices were not even fully digitalized, so the employees were coming from the carriage era and making a quantum leap into the future.”

Which was exactly what council president Pécresse desired. “At first I didn’t comprehend,” Saguez says. “I was thinking along classic lines, starting with ideas of black, gray, and navy. But Valérie said no. We must do something new. Something different. Original. She hoped that staffers would be enthusiastic, that they would want to go to work every day. She sought truly radical change. Then I went out and bought more colors.” Dozens of colors, in fact, in sophisticated shades used in eye-candy combinations. And where color led, all else followed. “She forced us to go even further,” Saguez adds. “If you’re going to go far out, you have to go absolutely all the way.”

The result: Open-plan desk clusters are mixed with casual “discussion areas,” separate small rooms with desks and screens for individual privacy, and small freestanding booths with tall padded-fabric walls for discreet conversation. “There are places for isolated concentration as well as for sharing and relaxing,” Saguez explains.

Every floor’s elevator bank is unique and their 25 small pantries for coffee and snack breaks are all different. More than 50 original graphic works by Saguez’s firm cover walls and glass partitions throug­h­out the building, from a Roy Lichtenstein pop-art mode to snippets of lyrics from popular French songs and quotes from the likes of Simone de Beauvoir and Marcus Aurelius in big block lettering or script.

Stripes, dots, and swirls abound. One wall is devoted to photographs of French film stars. Others boast vivid floral wallpaper. A few abstract patterns were inspired by aerial views of Paris. Others are derived from urban street signage, and almost everything also serves that purpose: providing strong landmarks for navigating the enormous irregular spaces. Think “turn right after the bike mounted on the wall.” Underfoot, solid carpeting in neutral shades alternates with PVC flooring in black-and-white stripes or tilelike geometrics.

Since this is France, food is not forgotten here. There are four varied choices: Pop Café, with comic graphics and 1950’s–style Formica furniture; Sous-Bois restaurant, inspired by the region’s forests, with a slatted-oak ceiling and real, fragrant logs and greenery; Café Seine, an updated Parisian bistro with a streamlined take on classic globe lamps; and Ex-Libris, a library-coffee bar-lounge with an array of flea-market furnishings and bookshelves brimming with old leather-bound books and bibelots.

The word Saguez most often uses to describe the project is tonique, which is French for invigorating, refreshing, lively, energetic—like a tonic. There was no scrimping on amenities, he adds, but it all came in “significantly” under the cost for similar projects. Madame Pécresse has also announced that the regional council would be saving over $10 million dollars in annual rent.

When the project was ready for delivery, a delegation of future members of the council paid an initial visit. Civil servants can be critical, Saguez says, and “I thought they might yell at me.” Instead, they all started taking selfies.

Originally published in the November 2018 issue.