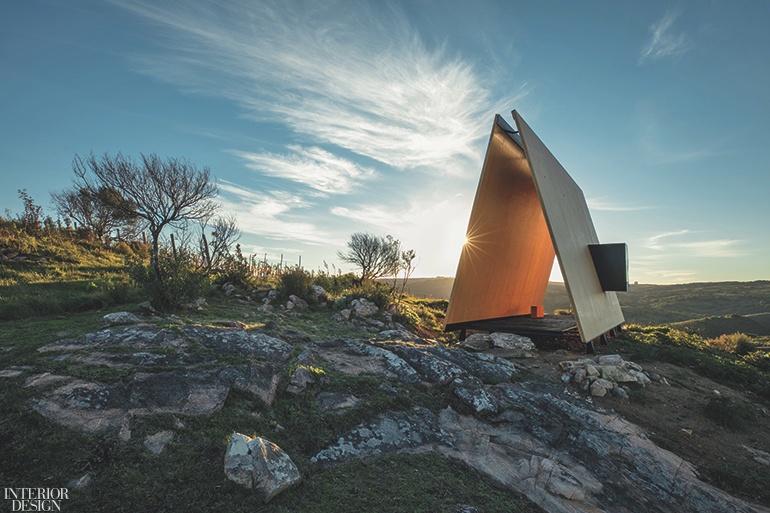 Childlike in spirit but architectural in scale, oversize kaleidoscopes wait along the hiking path at Sacromonte Crafted Wines & Landscape Hotel. The kaleidoscopes, fitted inside with mirrors, fracture views of the landscape into faceted pinwheels of brilliant earth tones. In terms of agricultural function, these prismatic devices are pure whimsy. For overnight guests, however, such small moments prove both memorable and eminently Instagrammable. At peak production, several years from now, the granitic soil on this estate in rural Uruguay, straight inland from trendy Punta del Este, will yield 40,000 bottles of wine—a boutique vineyard. For now, the property remains very much a work in progress. And small is beautiful, not to mention alluringly exclusive.

Sacromonte officially opened in November 2018 and it offers a dozen acres of grapes and four cabins by MAPA, with another eight under way. What began as 270 windswept acres of untouched land became the pet project of a Montevideo scientist whose French grandfather had emigrated to Peru and there operated an experimental vineyard that he called Sacromonte. The scientist borrowed the name of that vineyard, now long-defunct, when he planted the Uruguay site with imported French grapes, among them Syrah and Cabernet Sauvignon, along with the local varietal Tannat, often called the National Grape of Uruguay. Earth was moved, and a creek was dammed to form a reservoir of drinkable spring water.

That’s not, however, the only water feature on the property. Arriving visitors traverse a stream by trundling across a bridge newly built of heavy timber. Clack-clack-clack. They then leave their cars in a field rather than in a parking lot, per se. “We took care not to destroy the experience of nature,” MAPA partner Andrés Gobba notes. He completed the project with MAPA’s four other partners, Luciano Andrades, Matías Carballal, Mauricio López, and Silvio Machado. To maximize contrast with the edenic landscape, the firm delivered structures with its signature contemporary aesthetic.

The centerpiece of the composition, spiritually, is an A-frame chapel. It’s barely a building at all, little more than a pair of massive structural panels of cross-laminated timber, propped together to form a simple peaked construction. There’s an opening along the roof’s ridge, and the sides are also open. The floor is black steel grating. When the afternoon sun shines from behind an elemental cross standing outside, it casts its shadow on the chapel’s interior, right next to MAPA’s version of a shrine: a figure of Sacromonte’s patron Virgin of La Carrodilla, dressed in feast-day finery, displayed in a box that passes through the CLT panel. The sides, top, and bottom of the box are steel. The back, closing the box off from the elements but letting in the light, is a slab of translucent onyx, while the front is clear glass. Though there’s no electricity, the architects imagine small candlelit weddings held at sunset. “You can sit and contemplate the whole landscape,” Gobba suggests. After dark, the sky is typically scattered with stars.

Given a location so remote from urban hubs of skilled labor, the chapel’s architectural detailing is impressive. Gobba ex­plains how off-site fabrication proved a godsend. MAPA already had prefab experience, fortunately. In 2014, the firm launched a micro-dwelling named MiniMod.

Likewise made off-site is the top of a picnic table long enough to seat 50 for alfresco wine tastings and barbecues of lamb or wild boar. Again CLT, the top has freeform edges. In lieu of conventional table legs, the architects placed it on four marble blocks from a local quarry. To feed guests, two organic gardens are already in full swing.

A winery building won’t be strictly needed until the young vines mature. Plans for it include a small organic restaurant. Also yet to come is a pavilion housing hotel reception, incorporating a wine shop. The structure will be modular, trucked to the site from the same Montevideo factory that makes MiniMod. Each prefab guest cabin is a single module measuring 650 square feet, the biggest possible to transport by truck. Pre-assembly at the factory took a couple of months, during which time the fieldstone foundations were laid. A trio of cranes then worked in concert to fly the cabins onto those foundations. Next came the green roofs. Inside, there’s a king-size bed and, for occupancy by up to four guests, a daybed in a niche. Floor tile is ceramic that mimics slate, and paneling is oak-veneered. Built into the paneling in the dining area are a fireplace and a small oven.

Dining, living, and sleeping areas share a wide space fronted by high-tech reflective glass. Sidewalls are standard clear glass, equipped with louvered doors that slide across for privacy. The rear wall is mostly blank. Concealing it is a strictly decorative stack of firewoodlike acacia logs. In the cabins, however, guests are provided with eucalyptus, a rapidly renewable resource, and the logs can easily be replaced when guests use them up. That is in perfect harmony with Sacromonte’s ecologically enlightened mission: If you need something, grow it yourself.