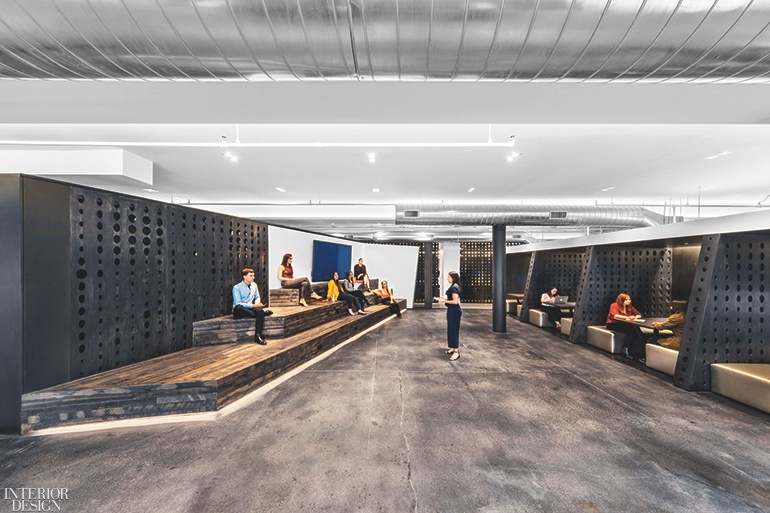 Insurance may not be the most daring of industries. But it’s long since moved beyond the retrograde office design depicted in The Apartment. In that 1960 Billy Wilder film, in which Jack Lemmon and Shirley MacLaine do their best to negotiate the Byzantine patriarchy of a Manhattan insurance company, the power structure is written all over the floor plan: Human drones fill rows of identical metal desks arranged in a tight grid contained by glass-walled executive offices (for men, of course). But the workplace TPG Architecture recently devised for the New York branch of the Bermuda-based insurance provider Argo Group is airy and modular, with an emphasis on collaborative areas.

The new space joins two floors of what once were 19th-century warehouses near the Hudson River. A terrace with views of the High Line (and landscaping inspired by it), plus a new penthouse, bring the total square footage to an audacious 45,800 square feet. “It’s a bold move,” TPG’s managing executive Michel Fiechter says of the sprawling digs for 200 employees, relocated from a much smaller warren downtown. “Argo executives could’ve just renewed their lease and taken another 10,000 square feet down the block. But Mark’s not about the safe bet.”

Fiechter is talking about Mark E. Watson III, Argo’s president and CEO since 2000. Watson was intimately involved in the office’s design from before the space even had functional floors. “It was past raw,” Fiechter notes, “literally, just a shell.” But the brick walls and wood beams had a muscular appeal. An expiring lease meant Argo had just nine months to locate and build a new home. “It was going to be a lot of work in a short time,” Fiechter recalls. “The building didn’t even have a TCO.” But he brought Watson through the empty space, as close as it had been in centuries to its original wharf-ey self, and hoped the client saw what he saw. “There was a lot of visualization,” the designer says with a laugh, “but we thought we could capture the rawness of what the area once was.”

Soon Fiechter was in Bermuda with an even bolder proposition. He urged the client to take a page from, of all companies, U-Haul. “The truck graphics are state-specific,” he explains, “but maintain the brand.” Thus began a plan for Argo’s offices in such cities as Chicago, Houston, and London as well as New York, each incorporating shades of Argo blue, perforated black screens, and open-plan desking, with nods to each locale courtesy of photomurals and illustrations by TPG’s graphics team.

In New York, the reception area references the concrete jungle through pressed-concrete paneling and a first glimpse of the existing concrete flooring, now polished. Jazzy LED strips surround the elevators. A long, glass-walled corridor looks out on the city’s buzzing sidewalks. To the west, meeting areas are composed of mobile ottomans, generous armchairs, and golden drum tables, and simple circular pendant fixtures bring to mind a more perfect version of the warm halo of streetlights. To the east, the space opens into a café with asymmetrical bleacher seating made of reclaimed barnwood. Screens of perforated blackened steel form walls, including those for booths outfitted with monitors to communicate with the myriad satellite offices. “We were very cautious with steel usage,” Fiechter says, “so it wouldn’t be overbearing or depressing.”

In the office areas on the same floor, the barnwood reappears, hiding ungainly fireproofing on structural columns. Modular workstations are illuminated by LED downlights that cast a soft brightness. “They’re more often used in museums on ancient texts,” Fiechter says of the linear fixtures, “but we liked the quality of light.” One area is dubbed the collaboration zone, an open skylit space that practically begs for face-to-face powwows with its commodious gray sectional sofa by Francesco Rota and enveloping Hayon Studio lounge chairs, some up­holstered in an Argo-blue polyester.

One floor up, the executive offices include one for Watson that doubles as the innovation lounge. His own Arne Jacobsen Swan chairs and Isamu Noguchi table are available for anyone seeking a private place to think; his personal desk is tucked discretely around the corner. As for the executive meeting spaces, “When you think of an insurance boardroom, this ain’t it,” Fiechter says. Gone are the overstuffed leather wingbacks. In their place: Charles and Ray Eames Aluminum Group task chairs covered in yet more Argo blue. A modular glass wall creates more conference rooms in the fifth-floor penthouse.

Wilder’s insurance executives of 1960 might well appreciate a martini at the vast wet bar on the terrace. But the steel-and-greenery aesthetic there is totally of today—not to mention the wireless connection, so the terrace can double as an alfresco work space. In a tip of the cowboy hat to the Houston office, there’s also a barbecue area. And the team somehow managed to convince the New York City Landmarks Preservation Commission to approve an Argo logo on the roof. Call it insuring the brand.