ACDF Architecture Pays Homage to Montreal at the Hôtel Monville 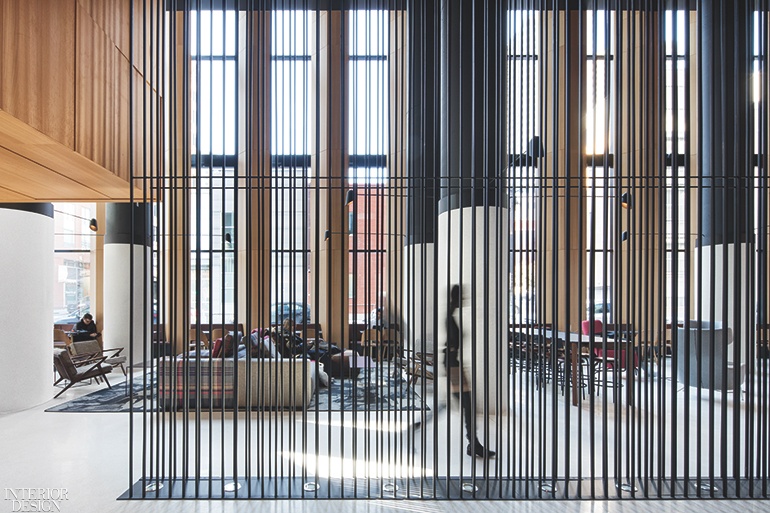 We couldn’t have said it better ourselves. “This was a dream client. He understood how design could improve business.” These unprompted words from ACDF Architecture’s CEO and lead creative partner, Maxime-Alexis Frappier, are a reference to hotelier Nathaniel Fraiberger, a native Parisian whose real estate company already owned Montreal’s stylish boutique Hôtel Gault and who was now about to embark on a nearby endeavor, the Hôtel Monville. Unlike the Gault, which occupies a 19th-century cotton warehouse, the Monville was a ground-up project and furthermore a brand-new brand—with expansion envisioned—so Frappier was instrumental in developing the branding in addition to architecture and interiors.

He programmed with bull’s-eye precision, targeting the intended clientele. That would be the businessperson, traveling light for a brief stay. Per today’s growing trend, therefore, the guest quarters could be small, counterbalanced by soupçons of luxury. Meanwhile, the lobby lounge and conference center, multiuse gathering spaces with plenty of work-play options, would rule. And the spirit of Montreal, celebrated in ways both overt and subtle, reigns supreme. Even the name Monville is a pun on the French words for my city.

The location is steps from the main convention center and down the street from the historic port district, now an arts area. As Frappier says, “It’s the sweetest spot in town.” The specific site, however, was long and narrow. “We took this biggest constraint and turned it into an asset,” he adds. That meant going up. Rising 20 stories, the hotel truly stands out from its neighbors. Another identifying factor is the striking facade. Most of it is a grid of precast concrete panels framing the windows—breaking down the overall scale by imparting texture and depth. At the base of the building, the concrete changes to uninterrupted glass, enclosing the triple-height lobby.

From the street, the view of the lobby lounge is punctuated by tall fins that angle inward from the curtain wall. For guests who enter, the first sight encountered is a low glassed-in vestibule, followed by a self-service check-in kiosk, evidence of Frappier’s mission to design what he calls “an intelligent hotel.” (A traditional reception desk is on hand as well.) The vestibule’s other function is to serve as a contrast to the soaring lobby. With its cathedral-worthy proportions and colonnade of columns, the 30-foot-high volume is definitely the ooh-la-la moment.

For all the lobby’s grandeur, Frappier worked hard to introduce a human scale. He used the columns to establish a visual datum line at the 10-foot mark. Their bases, up to that point, are the same white terrazzo as the floor. Above that, he painted the upper portions black. At the juncture between black and white, he installed Serge Mouille–esque sconces, which extend to cast light down on the lounge furnishings. What could be cozier than back-to-back sectionals, one of them covered with the city’s signature wool tartan?

The bar snakes around one of the columns. “We avoided a typical layout, facing a wall, to facilitate and provoke eye contact,” he comments. Some eating and drinking do occur at the perimeter, however, at counters in an alcove and at the windows. Along the rest of the window wall, the angled fins demarcate enclaves for tables and banquettes—call them on-the-road offices, semiprivate but still connected to all the activity.

Eavesdrop on a conversation at the bar or a counter, and you might hear people wondering about the three long boxes stacked asymmetrically just beyond the elevator bank. They look a bit like shipping containers, only in white oak, but what they actually contain is a sports bar at the bottom, a DJ lounge in the middle, and a balcony at the top. Function aside, architecture buffs might recognize these volumes as a reinterpretation of nearby wood cabins.

Another Montreal homage, one that you don’t have to be a native to get, is the black-and-white photomontage behind and above the boxes. “I wanted a major artistic expression, but I didn’t want kitsch,” he recalls. No worries. He commissioned a photographer who snapped shots of the surrounding neighborhoods, combined them with archival images, and created a photographic “fresco” as a virtual tour.

On the mezzanine that overlooks the lobby, two of the conference rooms can be found. The other two are on floor 20, opening to a roof terrace with skyline views—a venue that’s sure to be a hit when attendees at Interior Design’s Hospitality Giants event tour the 269-key property during their three-day visit to the city in October. They’ll also discover that there is more than the customary allotment of suites, almost a third, and they encompass roughly 450 square feet, versus standard rooms at 225 square feet.

Albeit compact, rooms read downright sumptuous with full-height windows and king-size beds anchored by headboard walls veneered in white oak. Should guests crave room service, their order is delivered by an unexpected server: a robot. Frappier believes it’s Canada’s first. Regardless, it’s yet another contribution to five-star luxury sans the five-figure price.