John Pawson Transforms a 19th-Century Former Hospital Into the Jaffa, a Luxury Hotel in Tel Aviv 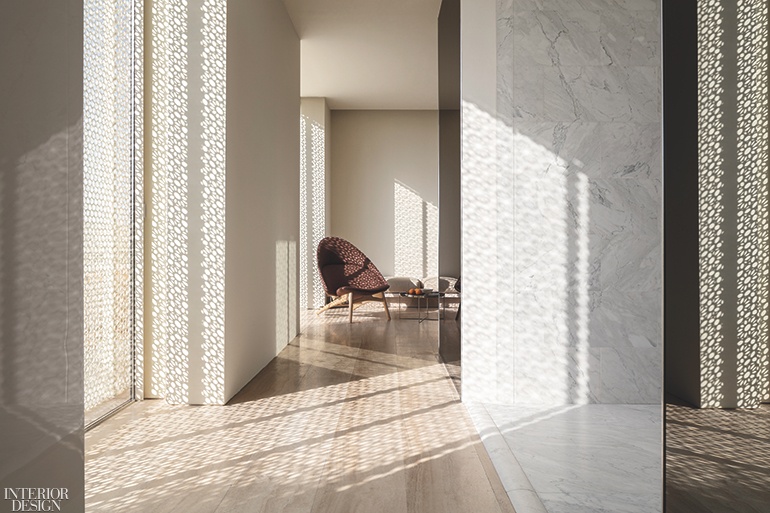 Until recently, showstopper hotels in Tel Aviv have been few and far between—just one or two in the city center or on the touristy beachfront. But the creative neighborhood of Jaffa, a warren of cobblestone streets with a bustling local market and artists’ studios, has been the focus of regeneration. New York real estate developer and RFR Holding founder Aby Rosen took notice and, in 2005, snapped up a prime, nearly five-acre hilltop spot overlooking the Mediterranean Sea. What was a French 19th-century hospital is now, thanks to a sensitive restoration and the addition of a new building by Interior Design Hall of Fame member John Pawson, the Jaffa, a luxury property featuring 120 guest rooms and suites, 32 residences, two restaurants, and a spa.

Rosen recruited Pawson to creatively helm what would turn into a 13-year project. Although the two had worked together previously, on the Gramercy Park Hotel in New York, Pawson had never done a project in Israel, and only visited the country once years before. But he was intrigued. “It’s the Middle East, it’s vibrant,” Pawson enthuses. “And Jaffa is the oldest port in the Mediterranean.”

What stands there now is beautiful—and it works. The u-shape, five-story former hospital was built in the neo-Roman style, its magnificent arched colonnades framing outdoor loggias retained and restored. That building contains 40 hotel rooms, as well as the Chapel, a stunning triple-height bar/lounge fashioned from a deconsecrated actual chapel, and two ground-level restaurants, which spill out to the oak tree–shaded central courtyard with pool. The new six-story structure houses the main lobby, 32 residential apartments, and the remaining 80 hotel rooms. The subterranean spa and fitness center are located between the two buildings.

Predictably for this area of the world, and part of the project’s delay, the 16-foot dig down to expose the loggia foundations, which now form the outskirts of the courtyard, was halted when artifacts and bones were unearthed. “Every level was a different millennium and religion,” Pawson explains. “So every religious and archaeological group had their say. As soon as you find bones, work has to stop until they’re proven to be animal.” Local architect Ramy Gill, whose firm, Ramy Gill Architects & Urban Designers, specializes in conservation, was instrumental in solving those issues.

The hospital restoration is exceptional: The area craftsmen are particularly skilled at paint- and stonework. What Pawson does with his signature modest hand is leave well enough alone when minimal intervention is required. That means imperfections, such as faded paintwork, old hospital signage, and just enough wear and tear are left to reveal the building’s rich history. “I was conscious that we did not over-egg it,” he says. “We asked how we could mesh the old and the new,” Gill adds.

Their solution was that what is new, aside from the recessed penthouse floor on the old building, never makes contact with what was already there. Pawson and Gill went to great lengths to ensure there were no connectors between the adjacent buildings. “That would seem provocative,” Pawson says. Instead, where reproductions might mask differences, they instead highlighted them with contrasting modern detailing. “There are no niceties between the two buildings,” Gill continues. “There is, however, a complement between the two centuries, a romance, without cheap gestures.” But the past and present do coalesce in the lobby. Running through it and part of the courtyard are remnants of a 13th-century Crusader wall uncovered during the excavation.

Pawson’s forte is creating a calm warmth from what is pristine and precise, usually without much applied color or pattern. For the most part that reigns true at the Jaffa: The new building’s facade coordinates with the historic structure’s limestone, and most flooring inside and out is a pale travertine. But also visible is a subtle departure for Pawson: unexpected decoration in the form of furnishings and finishes. There are tangerine Shiro Kuramata chairs in the lobby, standing out against the old stone wall, the palest of green throws on guest-room beds, graphic tilework in Golda’s Deli, the more casual of the two eateries, and, in the Chapel, time-bleached sky-blue paint on its vaulted ceiling and gold and lilac velvet upholstering seating.

Elsewhere, furnishings are characteristically restrained and chic. Across from Kuramata’s orange lobby ensemble are a gathering of ethereal George Nelson pendant fixtures and Michel Ducaroy’s Togo chairs upholstered in a sedate bisque color. More Togos appear in the presidential suite, accompanied by additional seating from Ludwig Mies van der Rohe and Hans Wegner. Subtly veined Carrara marble envelops its master bathroom. All guest rooms feature minimalist beds and rugs designed by Pawson himself and crisp photographs by local artist Tal Shochat. “It’s rare to get Gesamtkunstwerk,” Pawson says of the opportunity to handle the project’s architecture and interiors. “It’s not like anything we’ve done.”

A play between natural light and shadow is a Pawson trademark, however. Here, he’s offset the intense regional sunlight with aluminum screens, their perforations inspired by mashrabiya, an Arabic woodcarving technique. Installed as window shutters in the new building and the top-floor suites of the former hospital, and as balcony balustrades, the metalwork delivers a shifting chiaroscuro effect inside the rooms throughout the day. “Controlling light here is challenging because it’s so strong,” Pawson explains. “But because it’s so strong, as soon as it turns, it goes golden.” For the architect, it’s a golden debut in Israel.