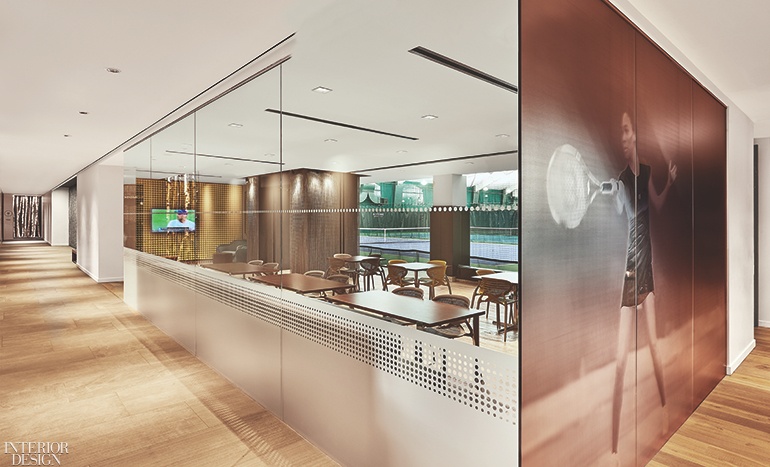 It was 1997 when Venus Williams last spent time at the Midtown Athletic Club. She was in Chicago for the WTA tournament, practicing with sister Serena, both teenage professional tennis players. Some 20 years and four Olympic gold medals later, Venus returned to the site, but in an utterly different capacity. The club has since been renovated and expanded to include the Hotel at Midtown, and V Starr Interiors, of which Williams is president, designed the tennis lounge and a guest suite.

In addition to star power, the project also signals a sea change in hospitality: a new focus on wellness. “It’s a flip,” architect Dwayne MacEwen says. “The hotel is the amenity to the club.” The principal of DMAC Architecture, which oversaw the 250,000-square-foot, six-story structure, is referring to its 96 percent fitness-related/4 percent hotel function breakdown, a first of its kind.

Actually, the 55-key hotel component came late in the game. “Everything was planned when Steve called asking how many rooms could fit on top,” he says of Midtown CEO Steven Schwartz, whose father built the original tennis club in 1970. “We realized there was a need in the neighborhood,” the neighborhood being an industrial corridor on the fringe of the city, well placed between it and O’Hare International Airport.

The program that had already been in place was to rejigger the club. Originally primarily for tennis, the purview has drastically widened. There’s now a full-size basketball court, a George Forman III–designed boxing ring, yoga and spin studios, an indoor lap pool, steam rooms, and a 20,000-square-foot fitness floor with bright-green artificial turf marching down the center.

Bright yellow is a highlight of the tennis lounge, a flexible courtside space serving players and spectators. “We love color, we love energy, we thought, What can we do that we haven’t already seen?” V Starr vice president Sonya Haffey recalls. “And we kept saying that we wanted the tennis-ball hue.” So, up went thousands of actual tennis balls along the lounge’s entire rear wall.

For his part, this was MacEwen’s first hotel project. “Because we had no preconceived notions, there was a real rigor to our process,” he states. “People walk in and say, What is this place?” referring to the second-floor lounge accessed by a monumental 10-foot-wide stair— it is a health club, after all. But since it’s also a hotel, the lobby-cum-social space is warm, woodsy, and resortlike. Likewise, walnut and engineered European oak pervade the standard guest rooms further upstairs, each with a mural nodding to the area’s warehouse past.

The vibe is more pampering in the suite by Williams and team, its all-white, dream-inducing bedroom juxtaposed by a moody living room, the dark palette intended to calm after a strenuous workout. But there’s a touch of grit, too: An exposed diagonal I beam was coated in a Cor-Ten spray. A second beam in the same finish was added above it, forming a V.