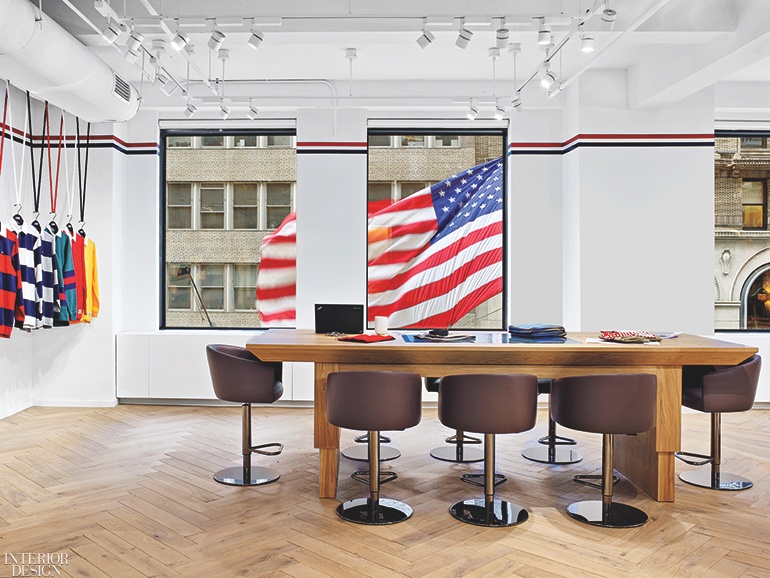 Given the state of the nation and its leaders, it’s a complicated time for Americana. It’s perhaps fitting, then, that Americana’s foremost proponents in the fashion world are also in a state of flux. Calvin Klein’s luxurious minimalism, for example, has, under the hand of Raf Simons, mutated into post-pop brilliance, while Donna Karan has been exploring Zen and safari influences. But not Tommy Hilfiger. Founded in 1985, the brand’s style—casual, comfortable, cheerful, aspirational—is undeniably conservative but also irrefutably successful. Still helmed by its namesake founder, the company has aligned the brand—and its red, white, and blue logo—with mainstream supermodels like Gigi Hadid as well as Red State icons like Formula One. Another way Hilfiger is bucking trends? Sales are up.

How to capture all this in a new headquarters. Like many U.S. companies looking to modernize and increase efficiency, the brand headed east—except in this case, that meant moving from 300,000 square feet in Chelsea’s landmarked Starrett-Lehigh Building to a less storied site in Midtown, with 200,000 square feet spread across 10 raw floors. Partnering with ENV, which counts such other American companies as Timberland and Harper-Collins Publishers as clients, made it possible. “We had to maximize every square inch,” interior design principal Annie Lee begins. She helmed the project with architect David Rush, president of the firm’s New York office.

The previous office boasted extensive work space and storage for its employees and streams of samples, swatches, and garments. In a company-wide survey ENV conducted at the project’s start, staffers extolled all that space, while resisting the siren song of the open-plan office. ENV’s solution was to install rows of Brian Alexander Studio workstations with desks and tack boards that raise or lower with the push of a button. Further, the workstations alternate with rows of tack board–fronted storage units in various configurations, depending on whether employees need hanging, folding, or drawer-based storage. Acoustic baffling along the ceiling in gray and tan tones help people hear themselves think. Tables front some rows, and they’re just large enough to measure a Tommy Hilfiger parka.

Executive offices take those workstations a step further. While smaller and more standardized than the previous iterations, the new spaces still boast individuality in form and function. ENV developed motorized desks-cum-meeting tables, with work surfaces that can be a single plane at sitting or standing heights, or a two-tiered system at any height its user might require. Hilfiger’s own office has a Swiss oak-topped desk, however, which stands across from plush sofas upholstered in Tommy Hilfiger distressed denim.

Meeting rooms and showrooms, meanwhile, are larger than average, able to accommodate the two dozen teams that often weigh in on collections. They have oak- or walnut-veneered tables, one hosting integrated digital interfaces that control a wall of LED screens. “It’s the most full-blown digital showroom I’ve seen,” Lee states. A sample of an outfit can be displayed life-size on the screen, and then all the other color and fabric options can be conjured up digitally, “which cuts down on cost and is more sustainable,” she adds.

Public spaces are festive. Reception leads directly into the People’s Place, a combination all-hands, lounge, coffee bar, and café space named for the first store Hilfiger opened in upstate New York in 1969, when he was still a student. “It expresses the essence of the brand’s style, its clubby nature and relaxed coolness,” Rush notes. Bleacher seating looks out on arrangements of vintage furniture and rugs patterned with the colors from the Tommy Hilfiger logo. Glowing mirrored ceiling coves bring to mind the three-way mirrors found in fitting rooms. A floor of red-and-white checkerboard tile demarcates the café; its mirrored walls can slide apart to open to a series of walnut-walled conference rooms beyond.

Lighting throughout is versatile and mostly unobtrusive: LED strips run through hallways, keeping the center clear and creating the illusion of height. Mock stores and showrooms have spotlights to show off the goods. (ENV stripped the gypsum board from their structural columns for a touch of industrial chic—and to eke out a few more inches of space.) Flooring patterns tend toward herringbone, whether rug or zigzagging white oak, throughout much of the interior, particularly in the private VIP showroom up on the ninth floor. Stripes are present too, the colors of the Tommy Hilfiger logo again appearing as such in the picture-molding level detail in most showrooms. The palette is unsurprising but exactly right. To accent what Rush calls the “clean crispness of the space,” his team chose traditional neutrals, a few flashy jewel tones here and there—and a whole lot of the timeless combination for which the brand is known: red, white, and blue.