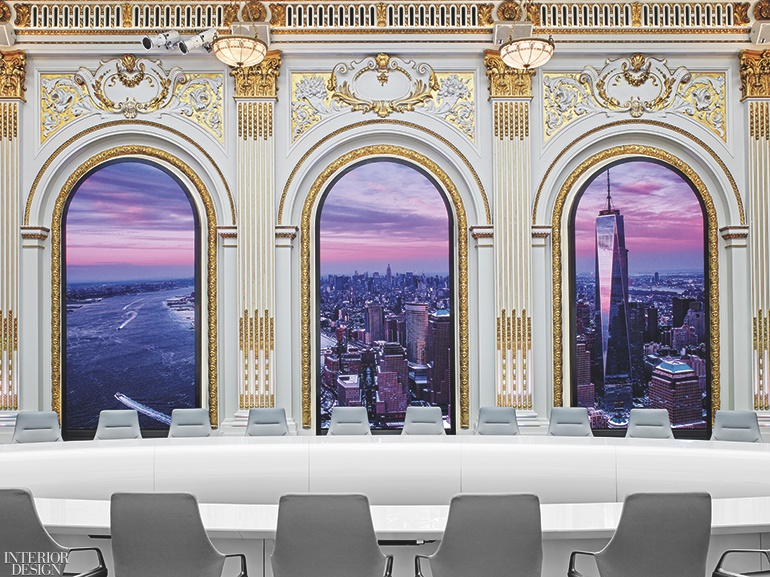 It was early afternoon, and the trading floor of that neoclassical temple of commerce, the New York Stock Exchange, was speckled with people quietly gazing at jagged lines rising and falling on screens. Not many years ago, the financial district site would have been marked by people shouting, scribbling traders, and ticker tape littered on the floor. Today, however, trading is conducted silently, around the clock, and largely beyond the physical premises of Wall Street. But at 226 years old, the NYSE is an institution of vast cultural importance, as well as a place where people continue to labor at desks, chew on steak, and hold board meetings. The legendary bell that signals the opening of the market at 9:30 AM continues to ring.

How does one recapture the NYSE’s energy and glamour? This was the question tackled by Interior Design Hall of Fame members Lauren Rottet and Todd DeGarmo, whose firms, Rottet Studios and Studios Architecture, respectively, were commissioned to renovate two upper floors of the eight-story 1903 building. Developed as working and event spaces for companies listed on the exchange, the rooms are now available to groups as small as two and as large as 300.

“We added back the wow factor,” Studios CEO and principal DeGarmo begins. “We wanted the exchange to be at the top of its game,” Rottet adds. “But it has this history, this amazing building that everyone respects.”

The project was a double-pronged effort: to restore the historic Beaux arts features within the 41,700 square feet and seamlessly insert new furnishings, artwork, and technology. The original spaces, which included offices, meeting rooms, a restaurant, an auditorium, and a double-height boardroom, were reconfigured or repurposed with a sensitivity to the building’s archaeological layers. “We didn’t erase the fact that things evolved over time,” DeGarmo says, referring to prior renovations.

So, the Hamilton Room, where NYSE members occasionally gather for bell-ringing ceremonies, still looks much as it did decades ago, when the pegged white oak flooring was laid. “It was actually a lighter color,” Rottet associate principal Sarah Poist notes; she and Studios associate principal Kurt Wayne worked closely on the project. After doing mockups of the wall paint and floor, the teams chose to stain the wood a darker brown—“It felt richer,” Poist says—but they refreshed rather than altered the green-and-gold gilding on the vaulted ceiling. A copy of John Trumbull’s 1806 portrait of Alexander Hamilton, America’s first treasury secretary, hangs on one wall.

Similarly, key elements have been preserved at 1792, the private restaurant named for the year that the Buttonwood Agreement was signed, establishing the course for the NYSE. A 1949 mural that illustrates the event is still in place. On another wall, a 1943 menu unearthed during the renovation lists such items as broiled shad roe with spinach and potatoes ($1.50) and almond tart (25¢).

When the Rottet and Studios teams turned to the boardroom, however, they undid previous renovations. DeGarmo produced a picture showing the space when the monumental leaded glass ceiling was obscured—a hangover from a terrorist-instigated dynamite explosion near the building in 1920. And, a flanking pair of antechambers had been walled off from the central area. Now the massive skylight is not just exposed but also backlit, and the three separated spaces are returned to one. DeGarmo drew attention to a small gilded piece of the room’s original wall, which has been framed at knee level as a window into the past. Referring to Rottet’s quietly sumptuous decorative details, he described the new Axminster carpet that stretches across the floor for yards in distinguished light and dark gray as “pure Lauren.”

At each point, the architects and designers sought to create flexibility. In the boardroom, archways between gold-accented Corinthian pilasters have now been fitted with LED screens that can be used for presentations. Elsewhere, a pre-function area has been technologically enriched so presentations taking place in the separate auditorium can be watched remotely. A new marble staircase descends from there to the floor below, improving circulation. (Before, groups crammed into elevators or were forced to use the fire stairs.)

The lower floor is where the executives used to roost. Tom Farley, a former NYSE president who was integral to launching the renovation, was the last to occupy an office, which had an attached private conference room. (He opted to sit in a more communal area with his staff.) Speaking to CNBC in 2015, he noted that the NYSE, now owned by Intercontinental Exchange, was taking design cues from technology companies because it had become, effectively, a technology company. But down in Farley’s former quarters, now a library with an antechamber, the mood is set by wraparound bookshelves and materials such as brass, hardwood, and oyster shell.

Proceed along the art-lined marble corridors and every meeting room is singular and compelling. The Bond Room, for example, has vintage engraved certificates hanging from picture wires along with David Hockney’s composite photograph of the Brooklyn Bridge. The Clerk’s Room features a signed letter from Thomas Edison offering his version of an invention that transmits stock quotations rapidly, i.e. the stock ticker. In a similar nod to history, the room off the library has a coat rack designed by George B. Post, the building’s original architect.

Members also have access to Siebert Hall, named after Muriel Siebert, the first woman to purchase a seat on the exchange for $445,000 in 1967. Its ceiling swath of plywood ribbons painted three shades of the NYSE logo’s signature blue was inspired by ticker tape. “We had a squiggle,” Wayne says of the concept’s first iteration. Along a wall is a gallery of artifacts, including Siebert’s circa 1970 coat, found during Rottet Studio’s deep dive through the NYSE’s archives.

“We hope our own history will be uncovered,” Wayne continues, explaining that, somewhere in the building, there’s a time capsule holding the business cards of most of the project’s contributors. He refused to say where.